John Pawson and OMA have completed work on the Design Museum's new £83 million London home, which is set to open to the public tomorrow (November 24) at the former Commonwealth Institute building in Kensington. Dutch architecture practice OMA worked with the London firm Allies and Morrison, and Arup engineers to restore the shell of the 1960s Grade II-listed building in west London, including its distinctive copper-covered, hyperbolic paraboloid roof. Architectural designer Pawson, meanwhile, was responsible for the building's newly reconfigured interiors, where the Design Museum's galleries are arranged around a minimal oak- and marble-lined atrium. Pawson also created a standalone shop for the museum.

“I think its marvellous to have been able to save the building, and have it now as what's going to be a world-class centre for design” 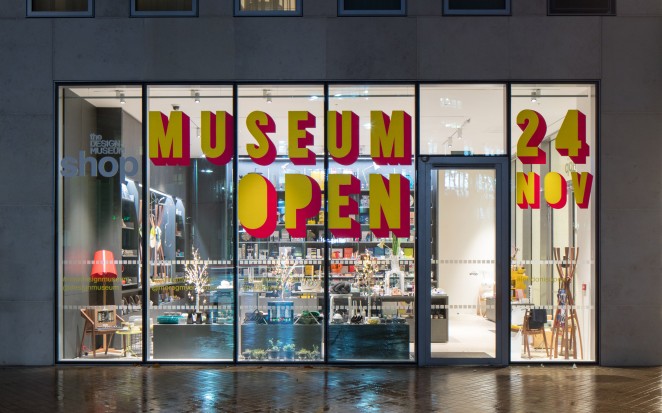 Whilst the new Design Museum doesn't open publicly until tomorrow, it held a press preview last week, offering a first glimpse inside the building, and it's something of a modern marvel. Two basement levels were excavated below the footprint of the original 1960s Commonwealth Institute building, increasing its floor plan from 6,000 square metres to 10,000 square metres, thereby tripling the space available at the museum's former Shad Thames location in southeast London.

“Having decided that we wanted to keep that extraordinary atrium, the aim was for it to make a building that was really wonderful for people as well as objects”

The building's floors are connected by flights of wooden steps, which are surrounded by tall balustrades and double as impromptu seating. Hanging rails are integrated into the wood-lined walkways surrounding the atrium, giving the museum the opportunity to use the circulation space as an extra exhibition area. Floors throughout are covered in pale grey terrazzo, with the underside of the building's impressive roof form left exposed. Subterranean levels host storage rooms, back-of-house facilities and an auditorium, while a temporary exhibition space is located off the atrium at ground level. The opening exhibition, “Fear and Love,” is organised by the Design Museum's chief curator, Justin McGuirk.

“The structure of the building beforehand was not capable of supporting any kind of meaningful modern function, but what was the star of the show was the roof” 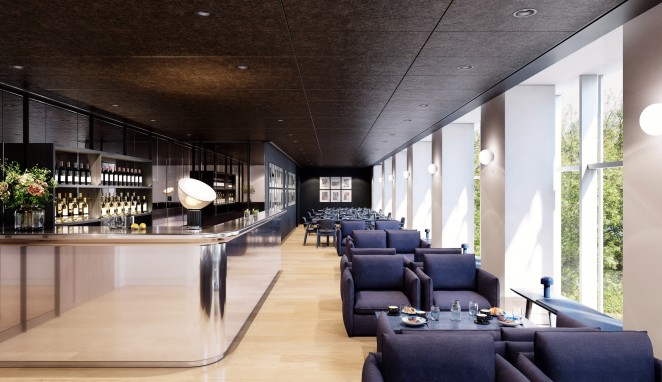 The museum's library is located on the first floor, alongside the archives of designer Robin Day and an education space sponsored by the Swarovski Foundation. The top floor is home to the museum's permanent collection, where displays are designed by Studio Myerscough (more on that below). This floor also has a restaurant and members' room designed by Edward Barber and Jay Osgerby's Universal Design Studio. The restaurant gives diners views out over Holland Park on one side and down into the atrium through internal windows on the other. The interior is finished with furniture made from blue-stained ash wood. The members' room, meanwhile, which also faces onto Holland Park, features a more restrained colour palette. Here, there is a polished-pewter bar and a mirrored wall. Both spaces are furnished with pieces from the Barber and Osgerby collections for Vitra.

“Our goal was to complement Pawson's design, while contributing to the visitor experience, one that creates a fluid transition from day to night within the space” 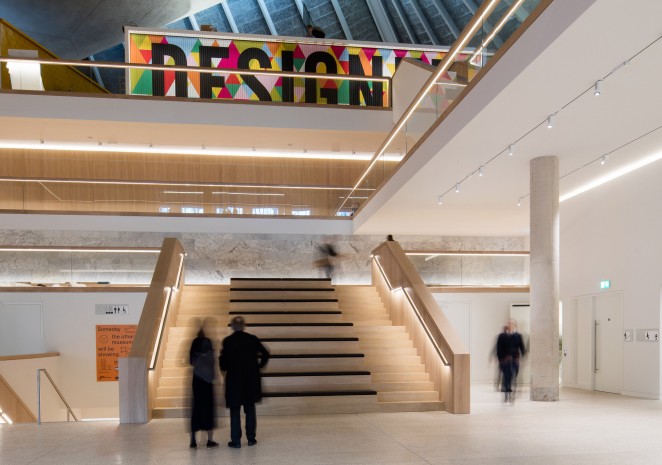 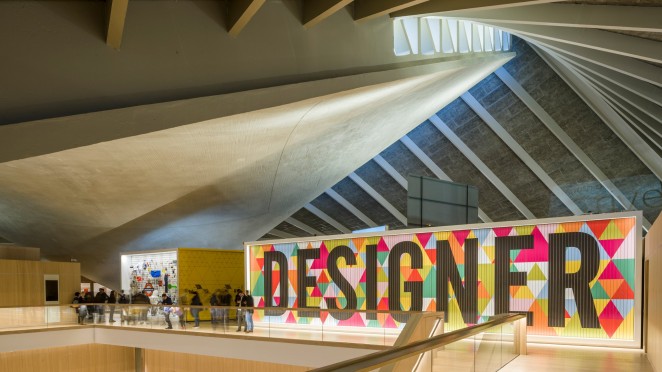 As mentioned previously, Morag Myerscough has designed the new Design Museum’s first permanent exhibition, known as “Designer Maker User.” Her own Studio Myerscough has been working with exhibition curator Alex Newson for the last five years on the permanent exhibition space, which features a hand-picked selection of the Design Museum’s 8,000-strong product archive. The space also features a crowd-sourced wall of selected designs submitted by visitors and Design Museum fans through social media, which aims to break down boundaries between designer and consumer. This wall will alternate products frequently, as more people submit their ideas.

“Permanent exhibitions always imply there’s an end to them and that it stops. This is totally open-ended. It’s about questioning things as a visitor” 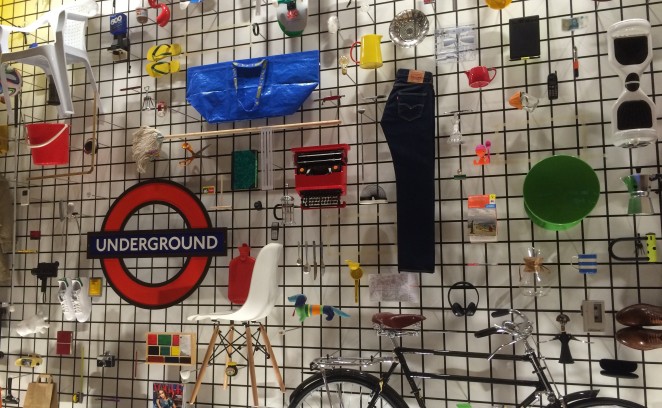 Product exhibits include objects such as the London 2012 Olympic Torch, the Walkman, iPhone models and Valentine typewriters. It also includes a look at London’s transport systems and accompanying wayfinding systems, and aims to include more abstract design concepts which challenge the idea of what design is. Rather than being split into sectors such as graphics, furniture and product design, the exhibition is divided into three sections; designer, user and maker. The space has not been split into very distinctive or separate sections, but is layered, so that visitors can see through into other spaces and exhibits wherever they stand.

“We want people to go away and think about the things they’ve seen, see designs on the high street on their way home and understand more about how it affects them” 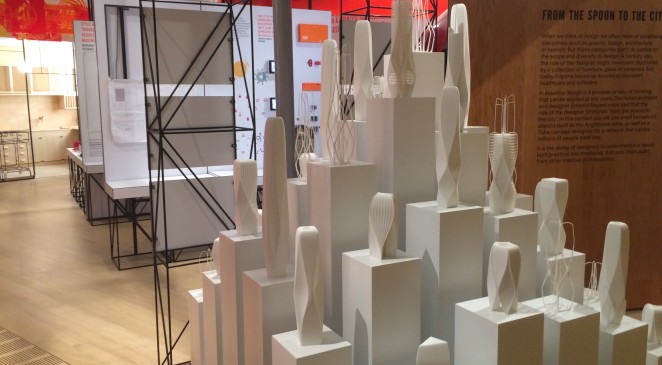 The Designer segment looks at the thought processes of the designer, while Maker looks at the evolution of manufacturing products and User explores the interaction between consumers and the designs they experience in everyday life. Materials have been used to reflect the different sections of the exhibition; for example, repurposed school laboratory wooden worktops have been used for the Maker section, which Myerscough hopes will wear away over time to show the evolution and changing nature of the exhibition. Myerscough has also created a moving, colourful graphic that sits outside the exhibition space, which uses a mechanical billboard mechanism to alternate between the words “Designer,” “Maker” and “User.” Both Myerscough and Newson hope the exhibition will encourage visitors who are not professional designers to think about design in new ways. If previous Myerscough initiatives are anything to go by it's bound to be a unique and fascinating way to spend an afternoon. Entry to the exhibition is free too, so if you're pressed for things to do this weekend, you know what to do!

“Designers need makers or manufacturers, and equally need to respond to users. There’s not a single, linear approach, it’s layered. Everybody needs each other” 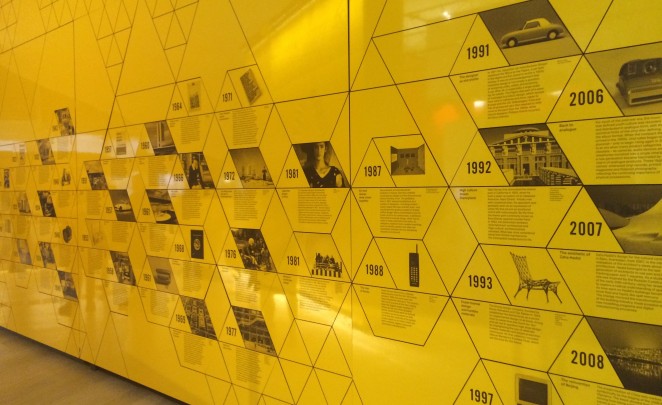