The London Design Festival recently unveiled it's installation plans for the 2015 festival, which will run between the 19th and the 27th of September this year. David Adjaye, Alex Chinneck and Mischer Traxler are among the esteemed designers set create installations for this year's festival, which will include everything from an electricity pylon turned on its head to a courtyard filled with mirrors. At a conference held yesterday (May 13) a number of large-scale installations by Irish firm Grafton Architects, London-based designers Matteo Fogale and Laetitia De Allegri and Mexican architect Frida Escobedo were also announced. These ambitious installations are poised to form just an (ironically) small part of the festival, which will host over 350 events in just over a week, including the usual array of exhibitions, talks and awards, spanning forms of design from graphic and digital to architecture, product, furniture and anything else you can think of.

Here we'll be looking at just a few of the most elaborate proposed installations. This year it seems is all about the spectacle, so if you're visiting the capital this September, be sure to keep an eye out for some exciting projects!

A Bullet from a Shooting Star

It would appear this year's festival will very much be the year of large-scale projects, with London-based artist Alex Chinneck set to reference the industrial landscape of the Greenwich Peninsula through a latticed-steel replica of an electricity pylon. Rooted to the ground by its pointed top rather than its legs, the 35-metre tall, 15 tonne piece will appear as if it's been shot into the ground. Named “A Bullet from a Shooting Star,” the sculpture will be tethered to lean at a perilous angle over an adjacent access road, and will be illuminated so that it's visible from the Thames and from aeroplanes en route to the capital's City Airport.

Tiny replica insects which have been “Made to appear live” will be captured inside 250 mouth-blown glass globes suspended from the ceiling of the Victoria & Albert museum's Norfolk House Music Room. The installation is called “Curiosity Cloud,” and is part of an ongoing collaboration between Viennese design duo Mischer Traxler and Perrier-Jouët. The fake bugs will collide with the glass, lighting up, and making tapping and buzzing sounds that react to the presence of visitors.

Grafton Architects will create an installation simply known as “The Ogham Wall” for the V&A museum's Tapestry Gallery. Pieces of nickel, bronze and brass will be inlaid into cast-concrete fins positioned in a wall through the gallery, which are to be etched with the texture of tree bark. The work takes its cues from the textures present in the tapestry's needlepoint and the linear form of an ancient Irish alphabet called Ogham. Studio co-founder Shelley McNamara, said “Each letter represents an ancient tree. It feels very architectural, like a musical score.”

The bridge linking the V&A's Medieval and Renaissance galleries will be transformed into a tiled landscape representing the perspective lines on a drawing by designers Matteo Fogale and Laetitia De Allegri. Arches of coloured transparencies will focus the attention of visitors along the gridded floor to the end of the hallway. This effect will be achieved by hanging a series of sheets of different colours over a grid of tiles on the bridge.

You Know You Cannot See Yourself So Well As By Reflection

As part of a year-long celebration of Mexican culture in the UK, the architect Frida Escobedo will be placing reflective surfaces around the V&A courtyard to mirror the overlooking architecture. Called “The Mexican Pavilion,” the project is based on the Aztec city of “Tenochtitlan,” which was built on top of a lake. This installation will be opening ahead of the festival at the end of May, and will be rearranged for a series of events until after the close of the festival in September.

The Tower of Babel 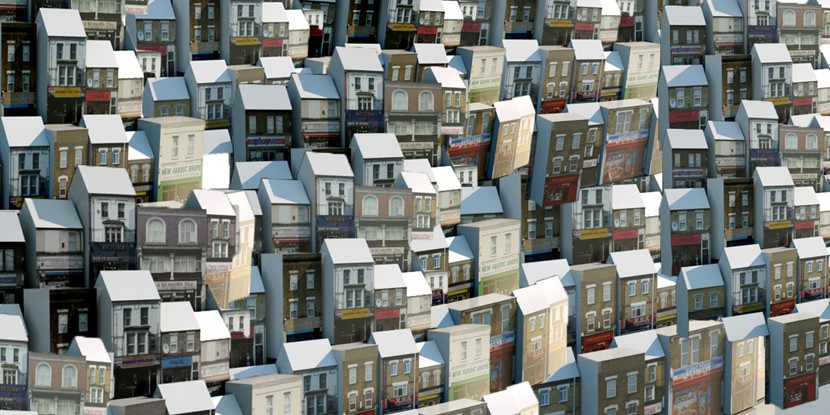 The Tower of Babel is a six-metre-high installation by Barnaby Barford made from 3,000 china surfaces. Each surface has a photo of a different London shop, and each can be purchased by visitors, though we'd imagine they're rather pricey.

The identity of the Festival was designed by Pentagram

The identity of the Festival was designed by Pentagram, and draws inspiration from old fashioned newspaper bulletin boards. The identity will be used on posters, the festival's programme and on its official website.