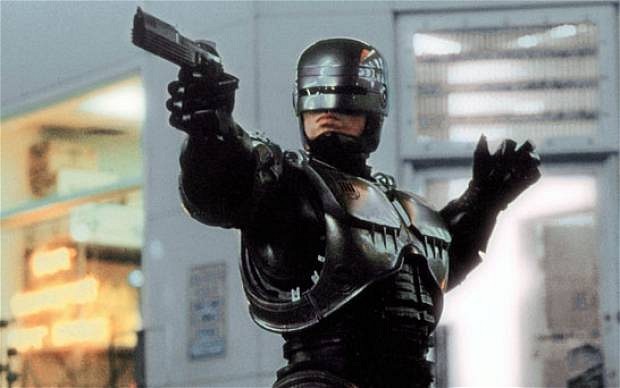 Lights, Camera, Pitch: What Hollywood Teaches Us About Advertising

The advertising industry, as portrayed by the world of film and television, is a fascinating, deeply weird place, and likely a rather unrealistic one, given the things that happen in fictional boardroom meetings and as a consequence of imaginary products. Even the ones based on reality, like Matt Weiner's Mad Men, prompt mixed responses from genuine ad men, who have gone on record both stating that the series is entirely realistic and also that its world is a complete and total fabrication played up to make it an interesting thing to watch for forty minutes a week. Regardless, here's a couple of lessons we can learn from advertising as we, the outsiders, get to see it.

Lesson One: Letting someone get killed by a product you want to see succeed at its unveiling is generally a bad idea!

RoboCop, Paul Verhoeven's brutal satire of the Reagan administration, features several scenes in which Omni Consumer Products, the corporation that privatizes the city of Detroit's police force in the film's now not too distant future, proposes products to its shareholders. The most famous of these is the scene in which OCP president Dick Jones, played by Ronny Cox, unveils ED-209, a law enforcement robot (and RoboCop predecessor).

He tries to demonstrate ED-209's capabilities by making one of the executives at the meeting hold a gun to the robot, which then asks him to put the weapon down and gives him a warning countdown. Upon putting the gun down, the robot continues its countdown, then proceeds to repeatedly shoot the executive, horrifying the board and allowing another executive to instead go ahead with the RoboCop program, which sets the rest of the film in motion.

Mad Men, especially as it has progressed from beyond its first season, doesn't make Don Draper's life look good; his heavy smoking, drinking, womanizing and recklessness has cost him cars, successful romantic relationships, his marriage, likely his health, and, increasingly, his mental well-being. All of these things have come closer to catching up with his professional performance, perhaps culminating in the moment in this season's sixth episode where he, drunk at a pitch meeting, proposes an idea plagiarized from a Sterling Cooper Draper Pryce applicant's portfolio, much his horror later on.

However, up through this point, Don Draper has been able to turn his failings as a human being into successes in his professional life, perhaps best shown by his presentation for Kodak's Carousel slide projector in the series' first season finale. In that scene, he talks about nostalgia and how the slide projector creates a personal bond between the user and the technology using nothing but photographs from his own personal life along the way, demonstrating the unattainable ideal of his marriage through photographs to a stunned audience.

Lesson Three: People will buy anything so long as it's marketed well (or at all)!

In an episode of The Simpsons called "Scenes From The Class Struggle In Springfield," Grandpa breaks the family television, prompting a trip to the Ogdenville outlet mall. After admiring a wall of televisions for a few minutes, the salesman tells Homer: "Listen, I'm not going to lie to you. Those are all superior machines. But if you like to watch your TV, and I mean really watch it, you want the CarnivalÃ©. It features 'two-pronged wall plug,' 'pre-molded hand grip well,' 'durable outer casingâ€¦'" Homer cuts him off within seconds and purchases the TV, which looks and performs exactly like the one the family is replacing, simply because it is the one advertised to him. This may, however, be a trend more specific to Homer Simpson than fictional characters in general.

Andrew Hall is a guest blogger for Pounding the Pavement and a writer on call center management for Guide to Career Education.