The non-profit organisation behind free the hugely popular internet browser Mozilla Firefox is asking the public to help determine its new brand identity through a unique open source rebranding initiative. The concept behind the Mozilla Open Design project is that it will provide Mozilla with a clear identity, one that has long been outshone by Mozilla’s flagship product, Firefox. This means actively seeking staff and public input on a selection of seven concepts that each explore a different facet of Mozilla’s advocacy for shared and open-source internet access and software. The aim is to represent its transparent and participatory philosophy and give the company’s muddled brand identity a facelift. It’s an undertaking that has never been carried out on this scale, and is being called “Branding without walls” by its creators.

Mozilla seeks to draw the line between the eyebrow-raising crowd sourcing technique, and its open-source approach. After the first reveal, a senior leader pointed the seven concepts had not touched enough on optimism. The concepts focused continually on threats to the free internet but failed to acknowledge its more positive aspects. Though the creative direction has decided against making a new concept board focused around optimism, it will be integrated into the next round of work.

Mozilla’s Creative Director, Tim Murray, said of their approach: “We are not crowd-sourcing the new identity and we will not resort to voting. While we have nothing against either of these approaches to design in the modern world, we feel that we will get better results from the call and response of design and review. We’ll avoid re-opening phases of work we have already passed so that we may keep the project on track.” 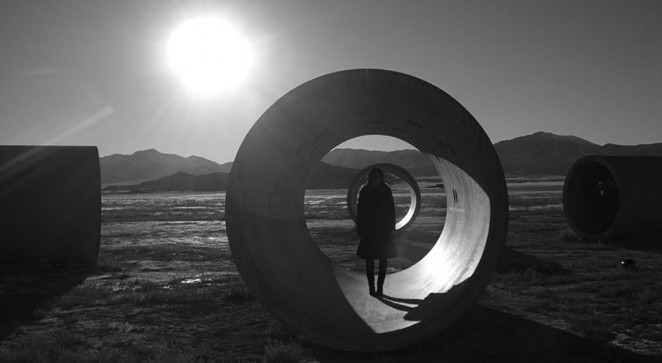 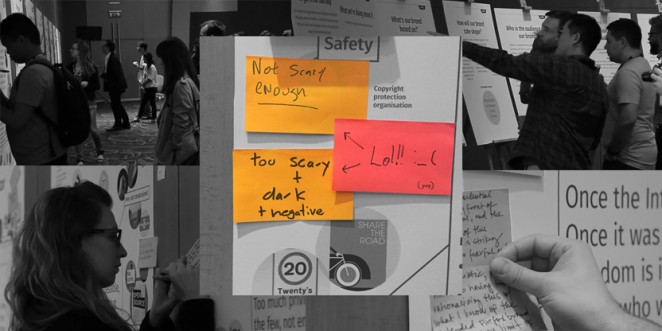 The company is coordinating participation and feedback with the design work of consultancy Johnson Banks. The process began at the first semi-public viewing of the Mozilla Open Design project in late June at the twice-yearly Mozilla All Hands gathering in London. The exhibition marked phase one “Ideation” of a four-phase approach, which includes first-round “Concepting (in July) and refinement (in September)” through to pressure-testing and “Guidance” in November for launch materials and a finalised campaign introduction. All ideas of the ideas generated throughout the project will be considered open source and made available through Creative Commons.

Johnson Banks helped Mozilla to develop seven concept boards which represent the possible approaches to crafting the company’s brand identity. “For All” is about equality and accessibility on the internet, for everyone. 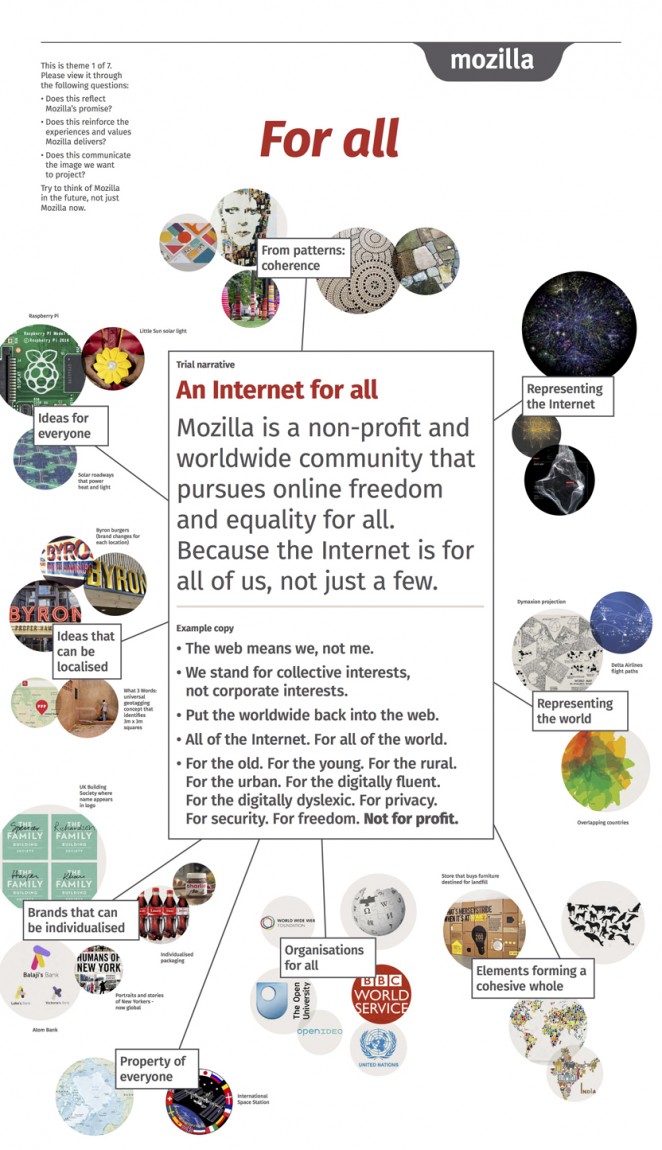 “The Guide” asks if Mozilla should be seen as a personal ethical guide to the internet, not one there to harvest or to track. 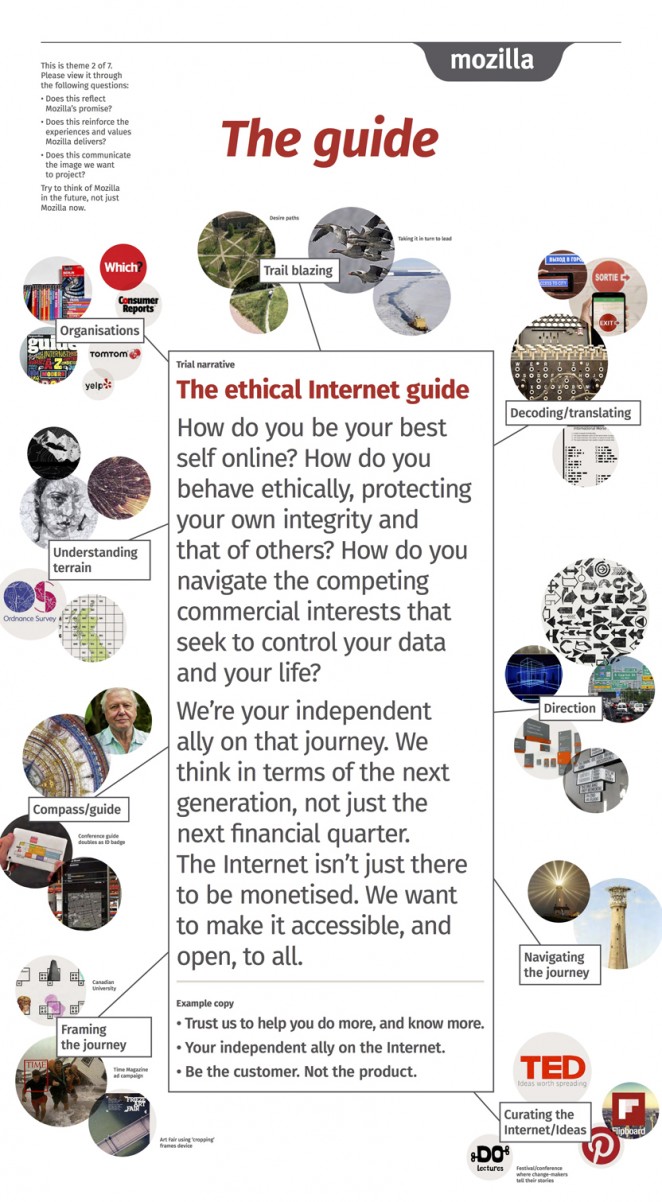 “The Protector” asks if Mozilla should be seen more as guardian of the internet, and draws parallels with endangered species. 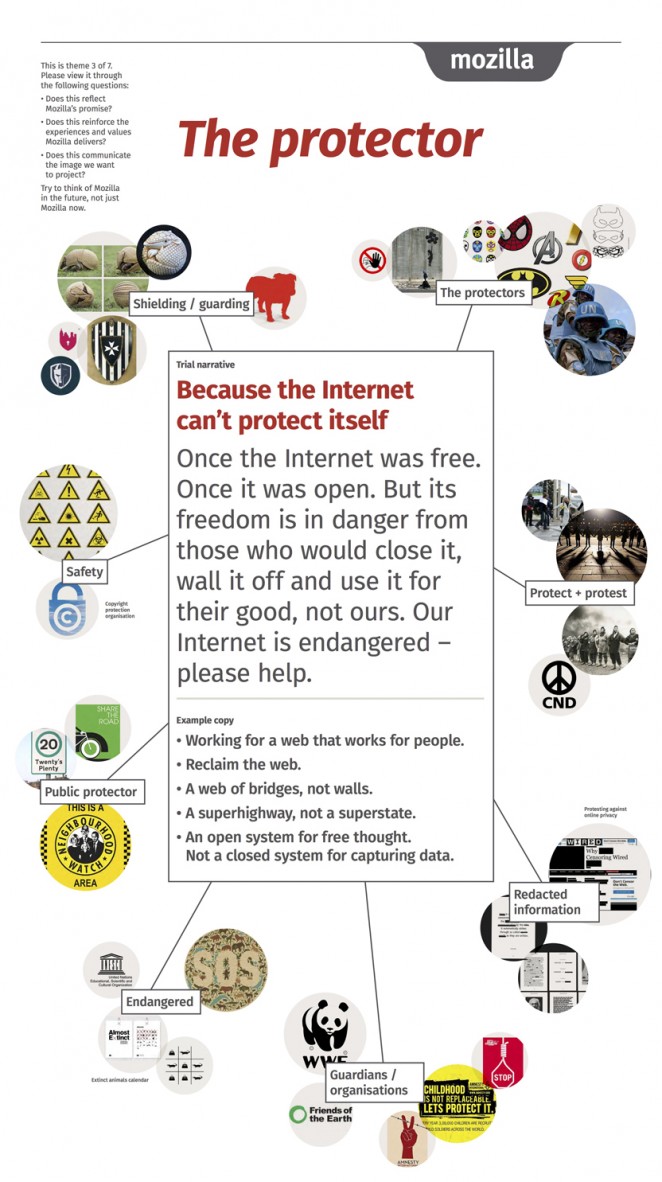 “For Good” asks if Mozilla should stand for the linkage between a healthy (open, free, nonprofit) internet and a world that is better for more people. 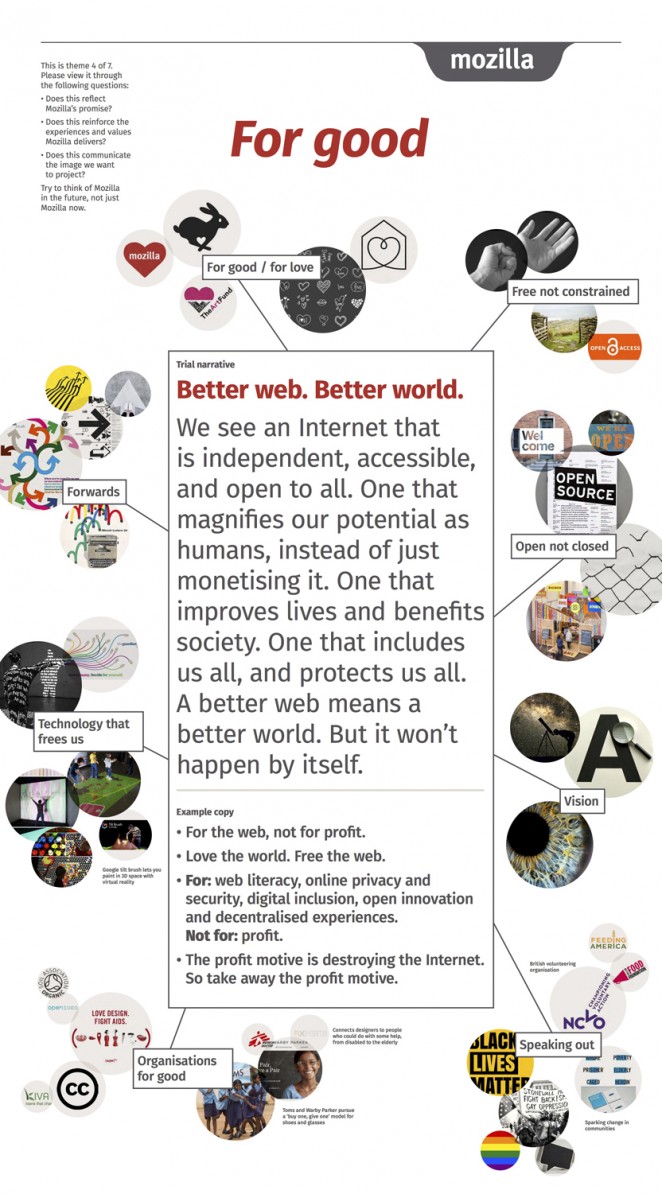 “Change Makers” represent Mozilla as a change-seeker and the voice of the internet. 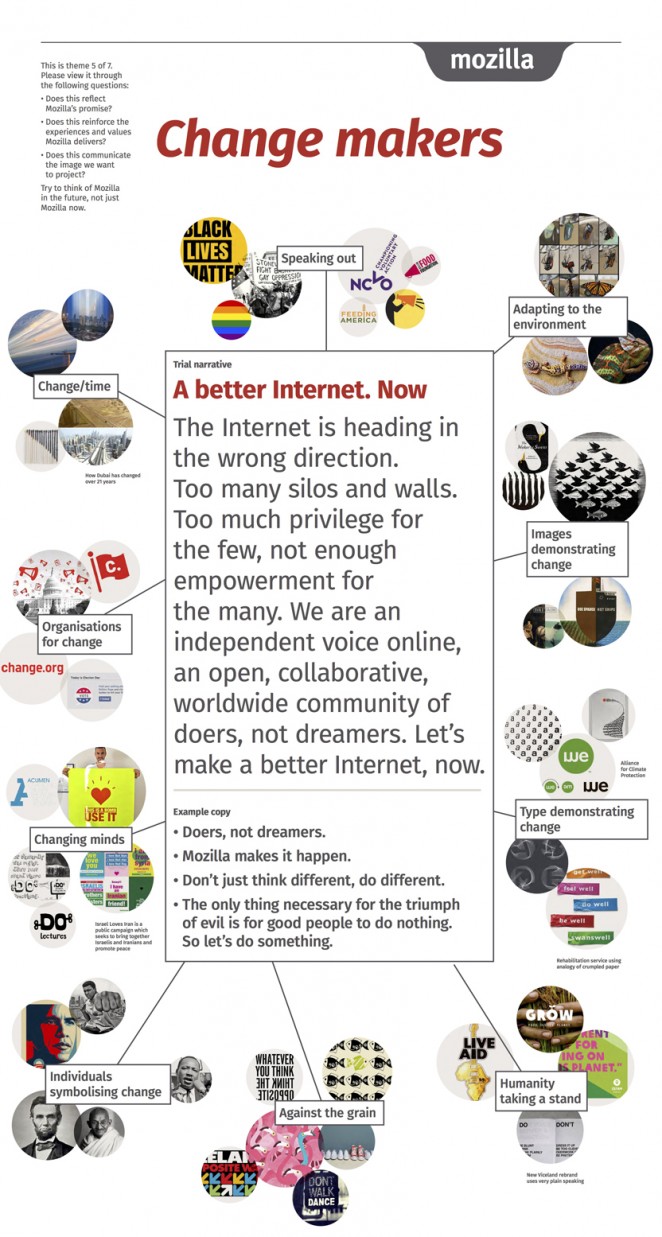 “For Freedom” puts Mozilla forward as the voice for freedom on the internet that is not closed or fire-walled. 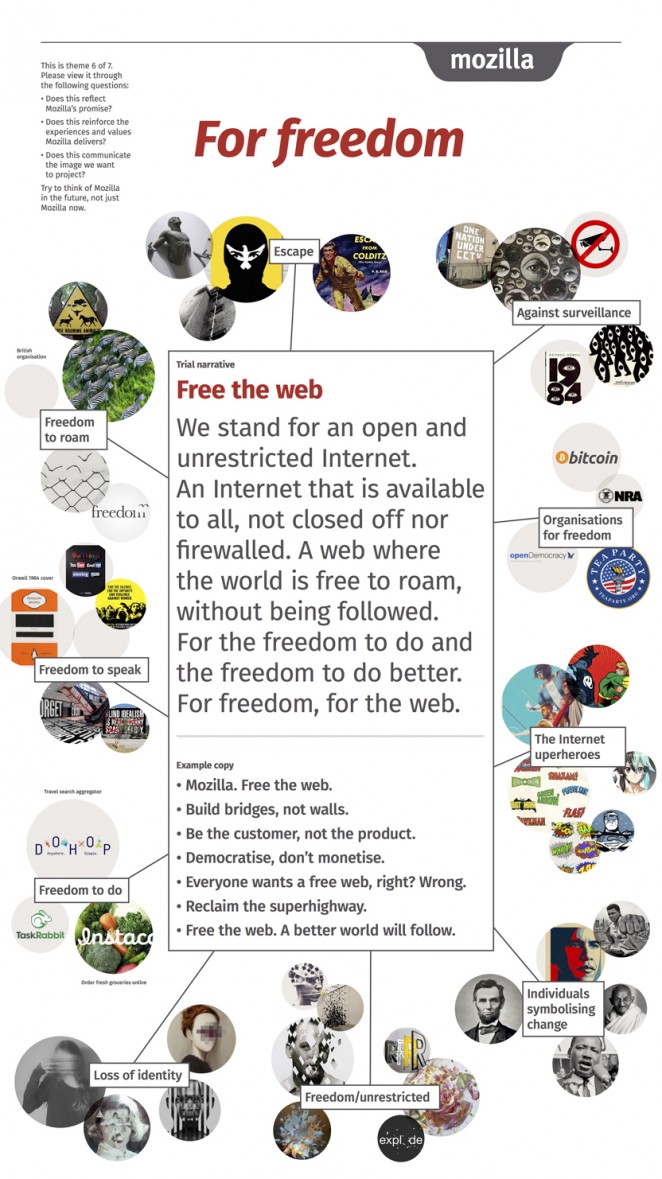 Finally, “The Fight,” shows Mozilla as an independent voice fighting for the open internet. 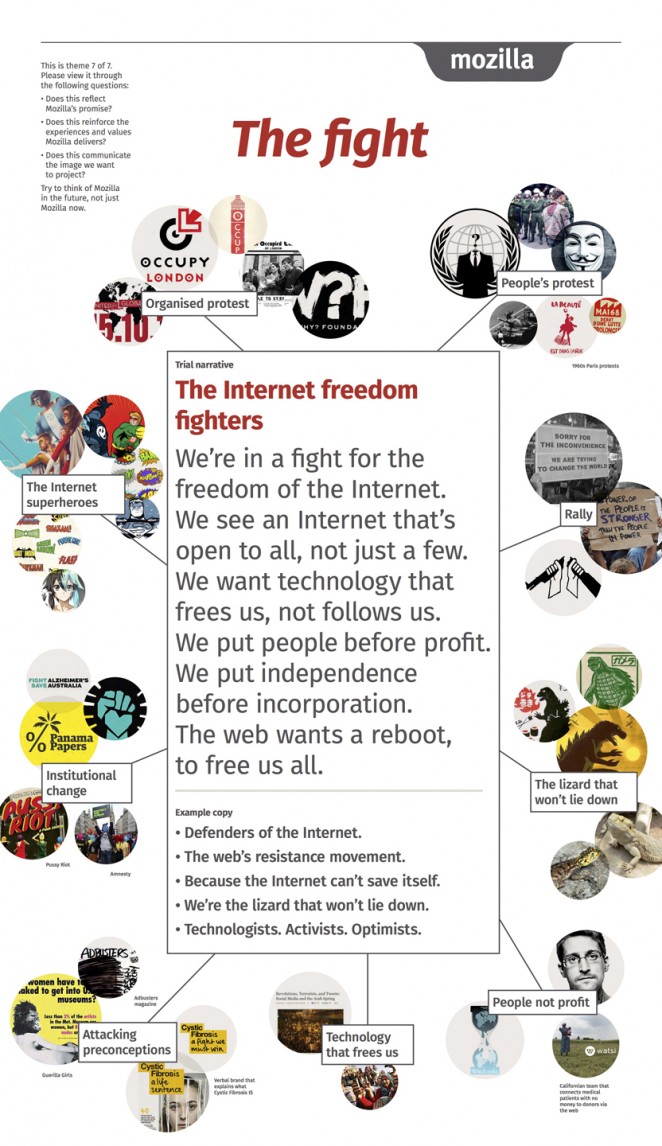