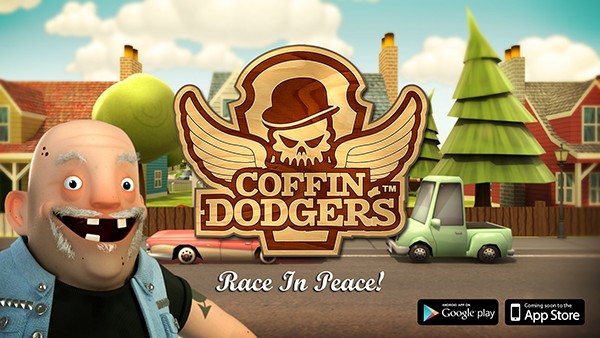 In Development: Watch The Teaser Trailer For Coffin Dodgers!

They say that death is everywhere, but for the inhabitants of Sunny Pines Retirement Village, he’s much closer. In fact, he’s just become a resident…

We’re very excited to announce our second title for iOS and Android, ‘Coffin Dodgers‘, an open-world, multi-player racer with a dark secret! With debut iOS and Android title, ‘Roller Rally – Snake Pass‘ now enjoying over 100,000 players worldwide, the team bring their unique art style and clever level design to a Florida retirement village where all is not as it seems…

Combining our trademark blend of charismatic characters with immersive game-play, Coffin Dodgers turns retirement on its head with souped-up mobility scooters, speed boosts and multi-player combat. With game development currently underway get a sneak peek at the action with our exclusive teaser trailer!

We’re really proud of Coffin Dodgers and can’t wait to share more of it with you. We’ll be releasing news, artwork and more on Milky Tea Play‘s Facebook and Twitter pages. Currently being developed with the Unity engine, the eccentric iOS and Android title is scheduled for release at the end of 2013.

The past twelve months have seen incredible growth for our burgeoning animation and games development arms. Currently working on a Unity game for BBC, we’ve also created animated assets for the likes of Lucid Games in iOS and Vita title, ‘Jacob Jones and the Bigfoot Mystery‘.

For more information on our animation or games services, get in touch! Email our producer, Susannah Howard on hello@milkytea.com or call 0845 003 8159