IKEA does more for the artist than a flatpack desk

In 1943 in a small Swedish village, an industrious, dyslexic teenager who went by the name of Ingvar Kamprad opened his first furniture store after spening his days selling matches, ballpoint pens, flower seeds and Christmas decorations to neighbours. Seven decades of growth later and IKEA has over 776 million customer visits per year and has reeled off 212 million copies of it's 2013 catalogue.

It's not just households which are embracing the flat pack revolution, since the 1990's IKEA products have cropped up in the visual arts again and again. Clay Ketter, Andrez Zittel and Jason Rhoades started the trend which many have since followed.

Joe Scanlan built a coffin out of in IKEA bookcase and then re-wrote the instructions so that others can follow suit.. 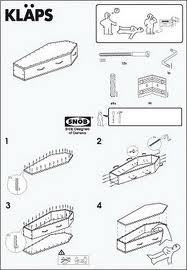 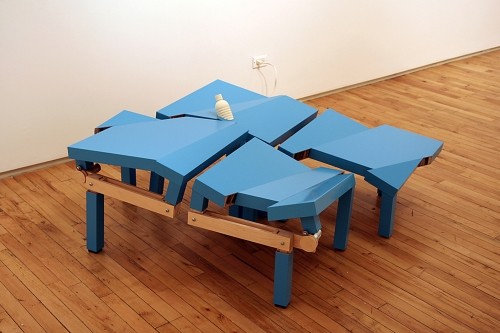 Banksy then spoke up with his 'IKEA Punk' graffiti... 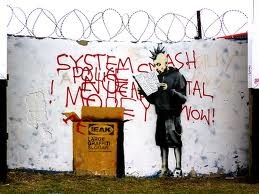 Using IKEA as your art supplier has it's distinct advantages in that it's accessible in almost any country, low-cost and minimalist in it's design which makes it somewhat of a blank canvas. There are also many comments to make on globalisation and it's other socio-political allegories.

When asked why he chose IKEA for his ready-made set he explained; "You can have the same food—say, McDonald’s—or the same desk in the U.S.A., in Germany, or in Japan,” Ben-Ner says. “The phenomenon is very much apparent nowadays with reality shows being the same in many countries. Differences are being erased, suggesting a cinematic world with no major continuity problems.”

And my personal favourite of IKEA artists is Adriana Valdez Young who fashions fashion out of common IKEA products such as sheepskin rug handbags, Frankta shopping bag dresses and salad tosser skirts.

“How many IKEA bags would it take to pack all of the contents of an average American home?” she asks. “The IKEA Frakta blue-tarp bag is an icon of our global consumer lifestyle and the excess consumption this entails.”

When moving from Brooklyn to London, Young cut down her belongings to fill just two Frakta shopping bags.

“And you know what? One of the first things I did when I got to London was to go to IKEA and buy all the basics I needed to restart my home,” Young says. “They fit in exactly two IKEA bags. So now the footprint of my possessions is equal to four IKEA bags. I can feel like this is an accomplishment.”

So next time you are struggling for some inspiration, you need nothing more than an open mind and the latest IKEA catalogue.