2018 was the year of the side hustle. Perhaps you were genuinely inspired to expand your experience, get that idea off the ground, desperate to earn a second wage: we all had our motivations.

I found my own side hustle, but my motivation was slightly different.

I’m a member of the Royal Tunbridge Wells Media Meet Up and it was there that a now-good-friend of mine, Pedro, said to me, “I think you would make a really good trustee at a charity; I know just the person who needs your skills and experience to help the charity grow.” I was curious.

The Hygiene Bank is founded on the recognition of injustice

A big part of my personality type is enjoying not knowing what I’m walking into and I got that by the spadeful with The Hygiene Bank. It’s a national grassroots charity and had been going a mere four months. It was boot-strapped and merely scratching the surface of a real hidden crisis in the UK, when I became a trustee for this incredible endeavour nearly a year ago.

The Hygiene Bank is founded on the recognition of injustice: no one should have to face hygiene poverty in the UK today. Galvanised by the belief that everyone deserves to feel clean, the charity gives personal care essentials to people in need.

60% of people in poverty across the UK are classified as the ‘working poor’. Being in poverty 20 or 30 years ago might have meant you were signing on and just about scraping by. Now it means you might have a job but it only takes one or two financial shocks to push your family into poverty. Think an expensive MOT to pay, funeral costs, or a divorce. This is called 'generalised insecurity' (Source: Wuyts, 2006): a feature of developing countries, and now a frightening characteristic of poverty in the UK.

I read reports about poverty, met game-changing people who had worked with food banks and helped to tackle period poverty, and I was staggered at the scale of the crisis that the UK - the fifth richest country in the world - is facing.

- 14 million people in the UK live in poverty. 4.5 million of those are children.

- 46% of teachers say pupils are bullied for hygiene reasons.

- Nearly 2 million older people live in poverty, of which 900,000 are living in severe poverty.

- Tooth decay (and therefore extraction) is the single biggest reason children aged between 5-9 years old are admitted to A&E.

- Hygiene poverty is everywhere and I was compelled to go on this quest to do something about it. 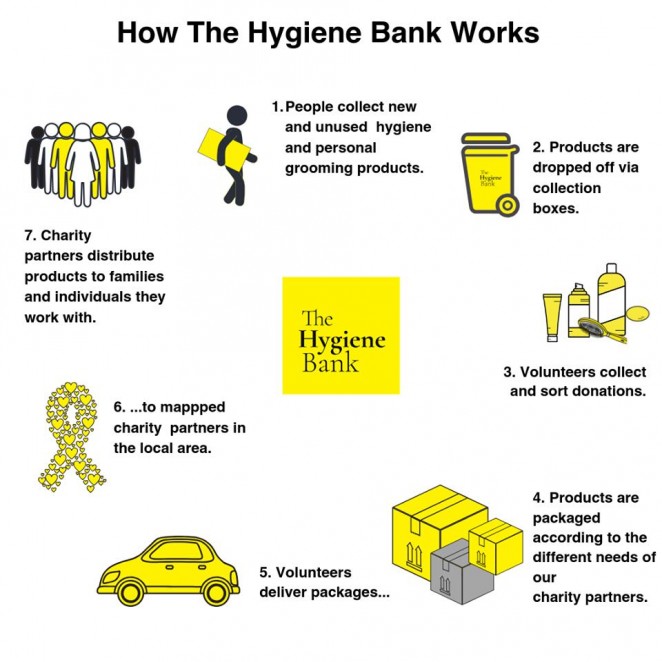 The Hygiene Bank’s operating model is centred on people power. Here’s how it works: a kind-hearted person becomes aware of The Hygiene Bank, quickly searches to see if there is a project in their area and if there isn’t, they set one up. They grow their local volunteer network and organise products being donated in drop-off locations. These are collected, sorted and distributed to charity partners in that local community, for example women’s refuges, YMCA and schools.

In our first 12 months, we have made huge strides forward.

- More than 300 active volunteers across the UK.

- A network of 110 active hygiene banks.

- Over 400 charity partners have benefited, reaching over 60K people.

- 9 patrons ranging from politicians to actors to journalists.

Being a trustee has challenged me in many ways over the last 12 months. I have gained new skills and met amazing, inspirational people. If you are keen to broaden your experience beyond the paid job, I would thoroughly recommend you consider becoming a trustee. Here are my top four pieces of advice to help you on your way.

I had no idea of the risks involved in strategically steering a charity to national growth. You have to pre-empt risk at every level, from safeguarding to supply chain to revenue. It’s an ongoing process and as the charity scales, new risks present themselves. It is hard to always be thinking, “What could happen?”

Setting the pace is challenging. I have a paid job and act as trustee in my own time. As the charity is national and volunteer-based, you can’t always predict where the need will come from. We have a strategic plan, an area of which each trustee is responsible for, but the unexpected always happens. Having the ability to adapt is a real skill.

IT CAN’T ALL BE FOR FREE

We are essentially a boot-strapped start-up until we raise significant funds through corporates, grants and trusts. To put it bluntly, we can’t pay anyone (yet!) so people generously give their time to build the charity. But we need and want to make things. Websites, marketing collateral, event material, balloons, badges, buckets, PR exposure – you name it. You need to use your network so pull in favours. But use them wisely because you might only get one shot at asking.

This is much easier said than done. We conducted research nationally with schools and I found myself getting deeper and deeper into the personal stories being told. One child had a full set of decayed milk teeth extracted in A&E due to not being able to brush their teeth. A mother couldn’t afford head lice treatment for her 5-year old daughter, so she had to shave all of her hair off. There was a father sleeping in his car during his divorce, going to work smelling and being ostracised by colleagues at his consulting firm. The stories are harrowing and endless. But you have to turn those real-life stories into energy and determination.

Together with my fellow trustees and our amazing volunteer network all pulling in the same direction, we can make great things happen and give people the chance to feel human again.

If you want to learn more about The Hygiene Bank, head to their website!