It was 1989 when a British scientist felt the need to automate information-sharing between scientists around the world. Until then, universities and institutes worldwide had struggled to share instant information and data about new scientific or technological findings, research and papers, but a man called Tim Berners-Lee believed that the technology was in place to allow all that.

It was 1989 when Tim Berners-Lee, that British scientist, invented the World Wide Web. Initially, it was not exactly a protocol of information-sharing, but rather a piece of software based on the Internet’s prehistory at CERN. According to retired CERN computer scientist Ben Segal, ”the field of data communications at CERN and elsewhere was equally chaotic” in the early Seventies, and what with the variety of different media, techniques and protocols, the sector was struggling to establish international standards. After much experimentation and nearly two decades of trials with the TCP/IP protocol, the CERN facility was ready to welcome Tim Berners-Lee’s much ambitious project. And oh, if it did. 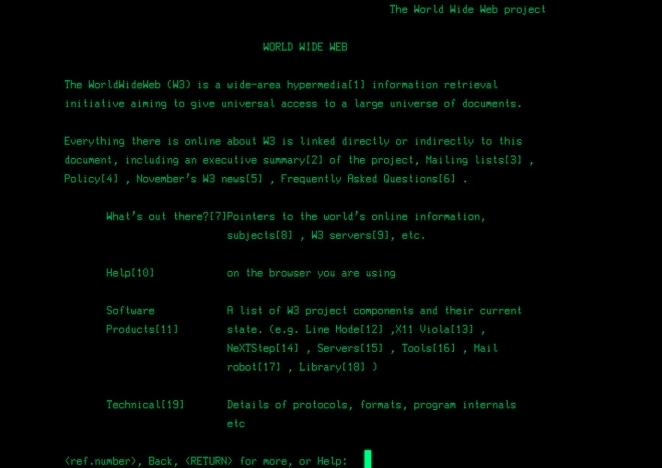 Interestingly enough, the world’s first website was dedicated to the World Wide Web itself. Released in 1991, it was a website hosted on Tim’s NeXT computer and explaining in detail what the project was, how it worked, including an explanation of hypertext links and a page dedicated to the people involved.

No style, no HTML, no images; nothing. The first ever website was a bunch of paragraphs in green interlaced neon against a black background, a repository of knowledge for scientists around the world. The site’s URL was http://info.cern.ch – and you’ll be surprised to find that CERN placed a careful recreation of the original website on that very web address.

Tim Berners-Lee wasn’t interested in patenting the Web technology to make money out of it, and so the World Wide Web entered the public domain on 30 April 1993. CERN made a release available in open licence to ensure the world would take care of Tim’s little baby, and so we did; in very little time, the first few web browsers were launched, and the Internet started to flourish worldwide.

Later, Tim Berners-Lee said that, had the project been monetised and under his full control, it probably wouldn’t have taken off the way it did. A testament to Tim’s much humility for certain, and a legacy for us all to learn from.

But it’s so ugly!

First off, that is debatable. The first ever website, with its green-against-black simplicity, evokes beautiful vintage feelings for those who were born and lived with the first ever computers. Certainly you couldn’t pull off a website this simple in 2021 and call it effective – or could you? Don’t forget that vintage and nostalgia still have a certain appeal on consumers – though it’s quite difficult to imagine anyone today knowing exactly how the first website looked like.

Still, perhaps it’s fuel for inspiration. As the first web browsers started sprouting around the world, the so-called Browser Wars started with Microsoft and Netscape fighting for the ultimate browser dominance, and this conflict slowly brought to the birth of Cascading Style Sheets (CSS), the first iterations of JavaScript and Dynamic HTML. As usual, conflict and competition is great fuel for innovation.

It was only later, in 1996, that Microsoft released its first competitive browser, with proper features and HTML tags. It supported style sheets, laying the foundations of the history of web design. Gone was the era of ugly, text-heavy web browsers and web pages – the new browsers would provide top-notch user experience, colourful web pages, style and the very first elements of web design. Though one can hardly look at the websites from the Nineties and point out elements of beauty in them, those were no more than stepping stones in the true development of web design.

We’ve come a long way since the very first website was released to the world, and yet again web design was able to demonstrate one thing about us humans: that we couldn’t make it without colours, creativity and beauty. That we wouldn’t be able to do anything without weaving stories or creativity into whatever we are doing.

We now have interactive websites, immersive experiences, beautiful scrolling animations and clever web design dominating our day-to-day life. And with Covid-19 forcing most consumers to bring their shopping online, it’s just natural that most brands will jump on the wagon of advanced web design to provide more creative experiences.

Looking back, Tim Berners-Lee first website feels like a far-off memory. And yet, the philosophy behind its creation and development has never been closer to us than it is now.

Jason Forth September 3rd, in the morning

Great read! I read that Tim finally made some money from his creation when he sold the original source code as an NFT for $5.4m! Well deserved in my book and what an amazing piece of history to own.

Hey Jay! Well deserved indeed, this NFT business is really something. I hadn't heard that Tim managed to do that, really happy for him. It is a huge stepping stone in human history after all. And it proves that you should never, ever trash anything that you create ;)