Heathrow has launched its first ever television campaign to celebrate 70 years of flight at the airport. “First Flight” is set to David Bowie’s little-known but lovely “When I Live My Dream,” and tells the story of the magic of a journey as seen through the eyes of a 5-year-old girl with her companion, “Owly.” On the girl’s journey from home, through the airport and then onto a flight with her treasured suitcase at her side, Harriet marvels at the magic all around her. The advert ends with the line; “To the next 70 years of first flights.” The advert launches on the airport’s social media channels this week and will then feature on TV for the first time on Thursday 21st July during the first break of Emmerdale on ITV. 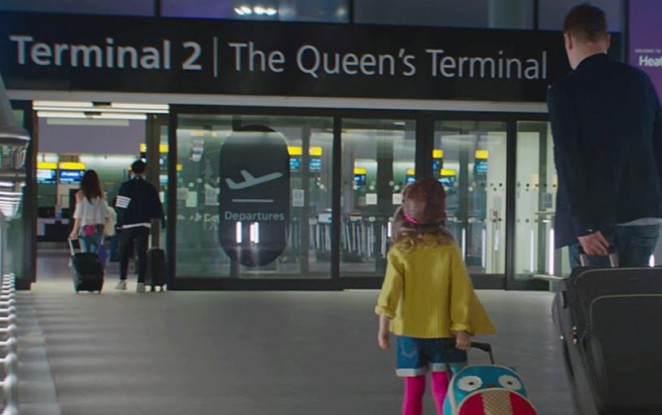 As part of the campaign, and in honour of Heathrow’s 70th anniversary, the Qantas airline is offering 70 people the chance to win “The Ultimate Trip”: a five-night stay in Sydney, Australia, travelling from Heathrow on the award-winning Qantas A380. Travellers are invited to share their favourite Heathrow memory (from amusing anecdotes to heart-warming tales) to be in with a chance to win one of 35 pairs of tickets available at the bespoke Heathrow Stories website.

The campaign message will be amplified beyond the TV campaign through a range of channels including press outdoor through a partnership with Absolute Radio Sponsorship. First Flight, and the 70th anniversary campaign has been created by Havas London. It was directed by DOM&NIC through Outsider Productions. The campaign, with media planning and buying by Carat, begins with video on demand spots on ITV, All4, Sky Media and STV. The campaign arrives amid reports the long-awaited decision over airport expansion could be imminent. Former transport secretary Patrick McLoughlin had announced after the Brexit that an announcement on airport expansion was not likely before October, but The Construction Index reported last week that his successor Chris Grayling could announce the go-ahead for a third runway at Heathrow as early as this week!

Heathrow’s CEO John Holland-Kaye said: “Heathrow has been proudly connecting the UK to the rest of the world for 70 years. Our campaign subtly celebrates the work that goes on behind the scenes by more than 400 organisations to make flight possible at Heathrow. The story is told through the eyes our heroine who sees the result of the airport team’s work as touches of magic throughout her journey with Heathrow.”

Havas London ECD Ben Mooge, added: “We've seen so many stories that have started and ended at Heathrow over the last 70 years; from the Beatles departing for America to Princess Elizabeth landing as our Queen. But just as importantly, every day Heathrow starts another of its millions of personal journeys, so we wanted to bring to life a small but universal one - the story of a little girl taking her bag on a first ever flight.”