French design company Appropriate Audiences have hacked a 3D printer and combined it with a tattooists' needle to create a unique “Tattoo Printer,” which might take a lot of the guesswork (and some would say artistry) out of future visits to the tattoo parlour for skin ink enthusiasts. The “Tatoué” uses a Makerbot 3D printer and attaches a tattoo needle to it, which inserts ink into a person's skin at rate of 150 punctures per second with a pinpoint accuracy that not even the most experienced tattoo artists in the world could replicate. It's an invention set to take the tattoo industry by storm. 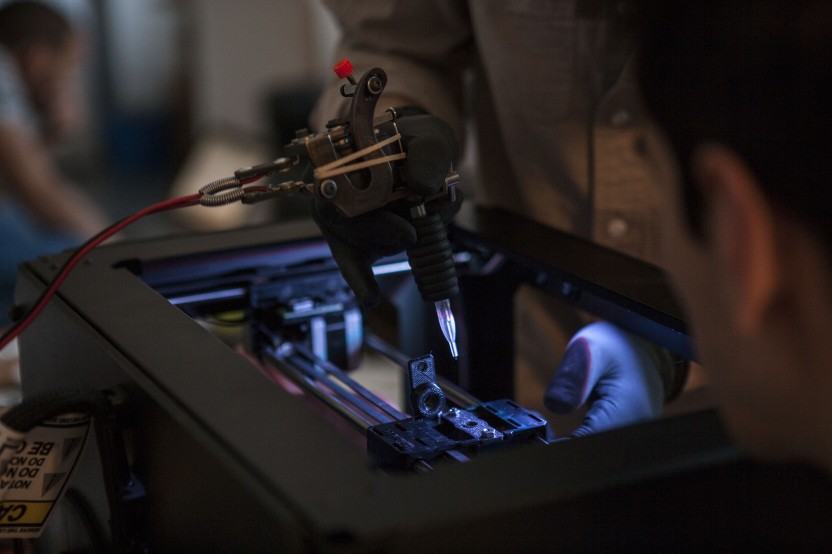 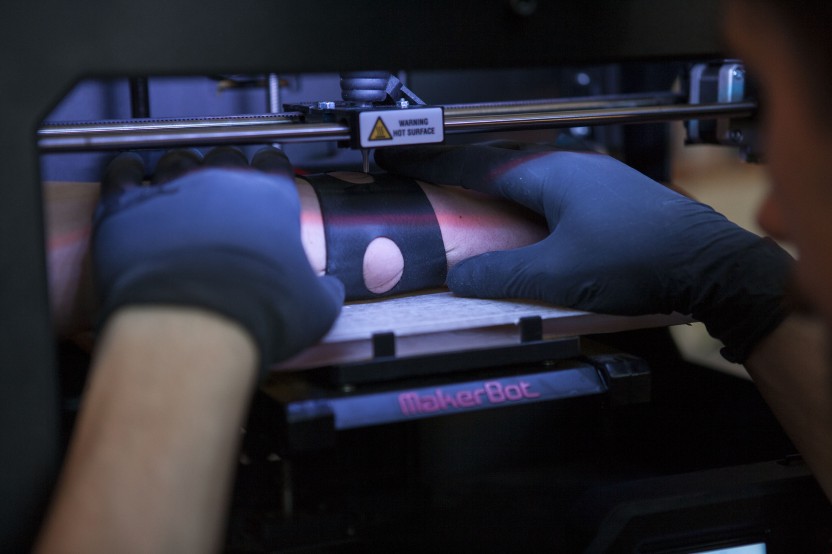 The “Tatoué” uses a Makerbot 3D printer and attaches a tattoo needle to it, which inserts ink into a person's skin at rate of 150 punctures per second with pinpoint accuracy

The designers and fellow ENSCI les Anteliers design school graduates Pierre Emm, Piotr Widelka and Johan Da Silviera, said the idea behind the machine is to “Give tattoo artists a new tool that offers plenty of new possibilities.” They say that potentially “Anything you want can be designed on the computer, and replicated onto the skin.” They do admit, however, that the machine is far from perfect in its current state, and that traditional tattoo artists might struggle with the complex technology behind the machine. They are working to rectify this, and hope to “Develop the software in order to produce something that is more user-friendly, particularly for tattoo artists.”

The operation of the machine is surprisingly straightforward given the complexity of the software. The tattoo needle is mounted in place of the printer's funnel (which generally excretes the melted plastic that builds up a 3D model) and a sensor mounted on the printing head senses the surface of the skin so that the needle perfectly follows the contours and textures of whichever limb is inserted into the machine, only piercing the top layers of skin. To ensure the machine was 100% safe, the trio of designers first tested it on artificial silicon skin, before moving on to their first human tester, who opted for a simple circle design. Apparently finding a willing volunteer was never an issue, as the designers joke “A lot of people were excited by the idea of being the first human tattooed by a robot.” Appropriate Audiences use a specially adapted piece of software produced by Autodesk, the world leader in 3D design software, which can turn tattoo designs into digital files that are then downloaded into the machine.

To ensure the machine was 100% safe, the trio of designers first tested it on artificial silicon skin, before moving on to their first human tester, who opted for a simple circle design

The designers explain that the first step was the deconstruction of a three axis machine, which they say was the easy part. They then had to make sure the machine worked on skin, which is a much more flexible material than the silicone they had been testing on. They said “Many tricks were tried to tighten the area around the skin (a metal ring, elastics, scotch tape),” but claimed the most effective one was “A scooter's inner tube, open on the area to be marked.” They said the main challenge, however, is yet to come; in making the machine more accessible. The add “There are many possible future applications; in medicine or in fashion,” but underline that their current priority is “A third version of the machine, which will be able to tattoo any part of the body using a specific architecture.”

They say the initial idea for the Tatoué was born in 2013 from a workshop at ENSCI, which asked them to use public domain digital material to create something new. The 3D printing company Le FabShop were present at the workshop, and helped the students develop their concept from scratch. They started off by hacking an old desktop printer so that it could draw onto skin using a pen and then borrowed a tattoo needle to see if the idea could realistically be taken to the next level. Now, just a year later, the level of interest in the machine has meant the trio can dedicate themselves to the development of the device full-time. They say the next step for them is to “Travel and meet as many tattoo artists as possible, in an effort to discover new practices and techniques throughout the world” and perhaps, in the process, forever change the world of tattoos.

Benjamin Hiorns is a freelance writer and musician from Kidderminster in the UK. He has no tattoos, because he thinks at this point it's probably more unique to not have a tattoo.