Google Ad Blocker: Don't get too excited, it might be a bad thing

Google recently announced that it will launch a version of the Chrome web browser that will automatically block intrusive ads in early 2018, following an earlier announcement from Apple that it too would be introducing an ad blocker to its Safari web browser as part of an update to its desktop OS. For Google, it would appear, on the surface at least, like this is something of a self-sabotaging move. They are, after all, a company that make a fair chunk of their ridiculous profits through online advertising. The reasoning here, however, at least as far as I can see it, is that Google are actually simply blocking out the competition here and are doing so under a guise of covert benevolence.

The company announced this week that it intends to install this 'filter' as a default setting in the next version of Chrome, which has become the most popular web browser in the western world. So, in theory, the average user opening up their Chrome browser for the first time simply won't see the ads blocked by the system. What ads would get blocked though? The ones not sold by Google, of course. Well, mostly. They couldn't be THAT blatant after all.

Sridhar Ramaswamy, SVP of ads and commerce at Google, said in a blog post: “Chrome has always focused on giving you the best possible experience browsing the web. For example, it prevents pop-ups in new tabs based on the fact that they are annoying. It's far too common that people encounter annoying, intrusive ads on the Web — like the kind that blare music unexpectedly, or force you to wait 10 seconds before you can see the content on the page.”

What exactly constitutes “annoying” or “intrusive” though? It transpires that the only ads blocked will be those that don't comply with the Better Ads Standards established by the Coalition for Better Ads, an independent group made up of trade associations and media companies, including The Washington Post. The kinds of advertisements that will apparently trigger the block include pop-ups, auto-playing videos with sound and those horrible ads that are pinned to the page no matter where people scroll. Sounds good right? 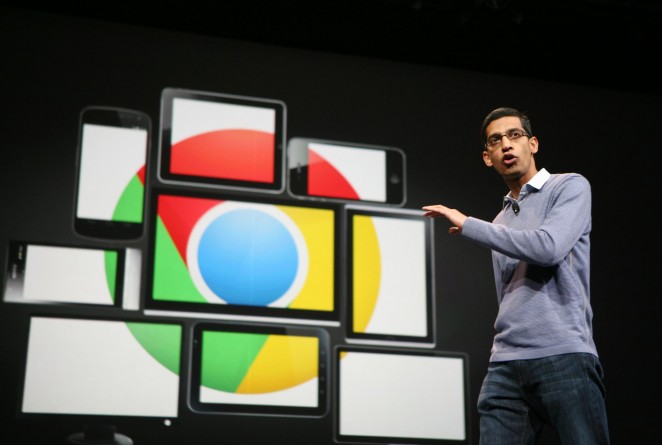 “These changes will ensure all content creators, big and small, can continue to have a sustainable way to fund their work with online advertising” Sridhar Ramaswamy

Rather than rely on full-fledged ad blockers, which may deny publishers and advertisers a way to make money, the idea is that Chrome's filter is designed to work as a business-friendly alternative, letting reasonable ads through but blocking the worst offenders. At least in theory. However, you have to ask yourself, is Google, a company which has such a significant stake in the online advertising world (indeed, it's expected to command nearly 41% of the $83 billion internet advertising market in the United States alone this year), really the best company to be policing the digital ad space? Surely thats's a conflict of interest here? Google is hardly renowned as a bastion of quality advertising either (it has a known history of paying off ad blockers to keep its own ads intact) and this new policy potentially creates an internet landscape where Google ensures viewing of its own ads to the disadvantage of competitors.

What does this mean for ad-blocking software companies then? This is a particularly pressing concern given the fact that, according to eMarketer, more than one-fifth (20.9%) of UK internet users will use ad-blocking software this year, with the total number number forecast to hit 11.4 million. However, with Google automatically blocking many of these irritating ads without the need to shell out for third-party software, interest in that software will undoubtedly decrease dramatically. That will discourage other companies from trying to capitalise on user dissatisfaction to get a cut of companies’ ad revenue and that would be very good indeed for Google’s bottom line.

More pertinently, however, what does this all mean for the digital advertising industry as a whole? Will Google's move put a squeeze on smaller publishers and ad companies with fewer resources? And if the biggest hitter in the game is putting up literal roadblocks to keep advertisers at bay, how, if at all, will they adapt to deal with this new reality? Publishers can find out if their ads are compliant by using an Ad Experience Report, which is designed to help them spot and fix issues, but how difficult will these 'perfect' ads be to attain by any publishers who are not in Google's pocket? I loath annoying ads as much as the next internet user, and getting rid of a lot of them should theoretically make pages load faster, which is great for everyone. Apart from the advertisers of course. Either way, we'll probably have to wait until 2018 to find out.

Ad blocking is really a result of poor quality, irrelevant ads being allowed to be served in the first place. Without relevance to the user, ads aren’t fit for purpose - they annoy users, and that annoyance is ultimately associated with the advertiser. Retargeting often exacerbates this further, as irrelevant ads often chase users around the internet.

The built-in ad blocker in Google Chrome will block all ads on a website deemed to serve intrusive ads, as determined by the Coalition for Better Ads’ Better Ads Standards. Such a measure has the potential to be very good news for advertisers and consumers alike, as it should encourage publishers to serve more user-friendly adverts, and for users to actually view these adverts.

But despite the Coalition for Better Ads being a third-party organisation, there is justified concern that Google is too close to representing defendant, jury, judge and executioner. Google serves ads, yet they’re putting themselves in a position where they ultimately determine which ad formats are shown on their browser – the most popular browser in the world. If an ad doesn’t fit the criteria that Google opts to use for the Chrome ad blocker, then every single advert on a website that serves that ad will be blocked from view for Chrome users who use the browser’s default settings.

But remember, by viewing ads consumers are participating in a value exchange. The internet is largely free because of advertising - users pay for their use of the internet by viewing ads. By removing those ads, ad blockers endanger this unwritten agreement between user and publisher. Google’s solution respects this agreement to an extent, but adds an additional, considerable caveat to it - websites that carry adverts need to meet Chrome’s non-intrusive advert criteria. The punishment for not doing so is somewhat nuclear - if a website is showing ads that are likely to encourage ad blocker usage, none of that website's adverts will be shown at all. If a website serves an advert that’s deemed intrusive, then even adverts deemed non-intrusive will be removed.

In general, by limiting the audience of low quality, irrelevant ads, consumer confidence in digital advertising is likely to increase. This is a factor we see at Conversant daily - by personalising adverts and their cadence of delivery to consumers, the relevance to them increases, thus increasing consumer confidence, and the return on investment of digital advertising to brands.