Martin Reznik has been a Creativepool member for over 10 years now, but it wasn't until recently that he started to leave his true mark on the greatest creative community on the planet (we're humble people outside of work, pinky swear). Since Martin started uploading his illustrations on his profile, he became quite a popular artist here on Creativepool – leading to him winning the first ever Annual Gold award in the Illustration category.

The winning work is an amazing blend of vintage and noir, Martin's personal take on the 1920s detective stories we all know (and some of us love). Influenced by comics and noir films, Martin started drawing his masterpiece... as a commission for a client in furniture design. Martin's unique approach to furniture illustration impressed all of the judges on the Illustration panel, granting him the absolute crown of the category this year.

In this Annual 2021 Spotlight, we are learning more about Martin and the impressive work below, as well as all the other equally amazing projects that brought him a win in The Annual 2021. 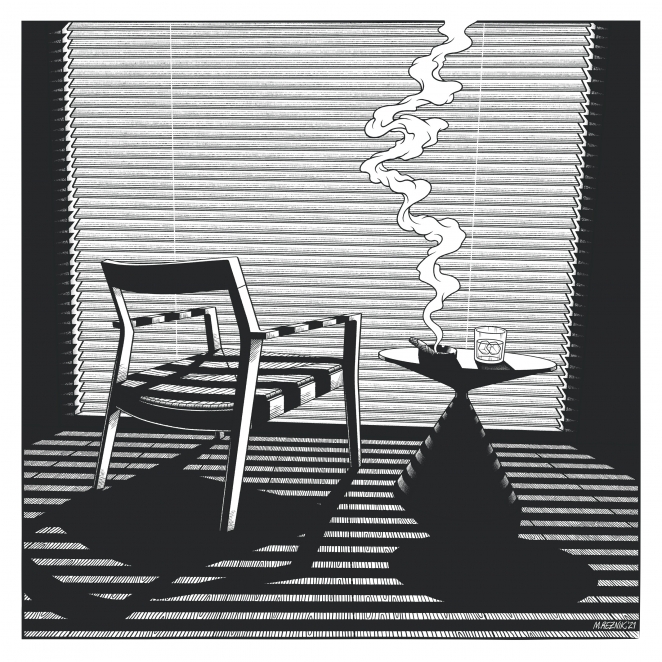 I was lucky enough to scoop three awards this year in the Illustration category with two projects that I entered. I was also told that my entry is the first ever Gold awarded in the Annual’s Illustration category, so that’s definitely pretty amazing and I’m very grateful. Based on the comments in Annual 2021 I think the judges were impressed by the attention to detail, craftsmanship and the overall flow and coherency of both series of illustrations. One of the judges whom I contacted afterwards to personally thank even said that it was some of the nicest work she have seen in a long time, so.. yay!! I’m definitely very happy with my decision to give the Annual competition a shot this year! 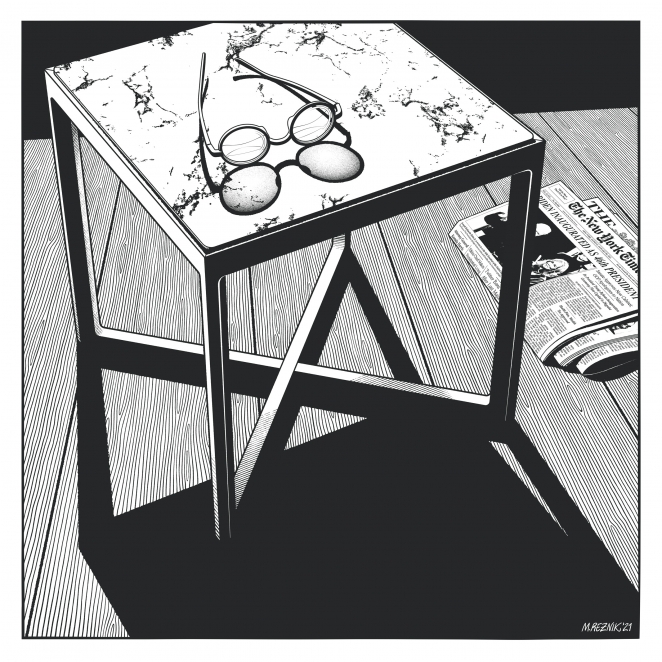 The series of illustrations that won Gold and People’s Choice award were commissioned by Marc Krusin, a London-based furniture designer, for the promotional use on his website and across social media channels. At first Marc asked me to create a single image of an interior setting featuring two of his signature designs - Krusin Lounge chair for Knoll and the Mini Clay table for Desalto. Marc gave me full creative freedom regarding style and layout of the illustration. 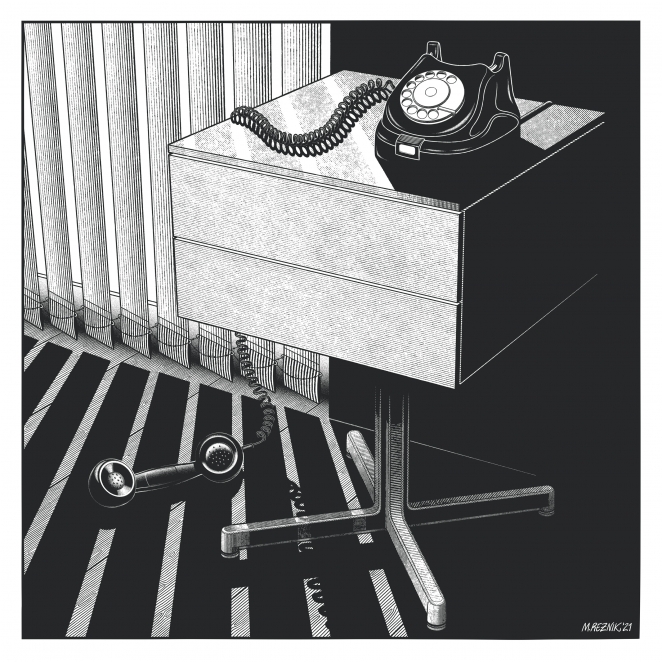 The initial concept for the first illustration was a bit of a happy accident. Marc sent me some reference photos of the furniture and among them there was a shot of a chair from behind and at a very low angle, which I found quite unusual and very intriguing. It sparked loads of questions in my head and being a fan of detective stories I decided to follow this approach in the layout of the image.

At first Marc’s idea was to create a mini series where each image would be drawn by a different illustrator, but after I completed the first illustration, happy with the result and the positive response on social media, and perhaps also curious of the unfolding story, Marc decided that I should do the remaining three illustrations myself in the same style. 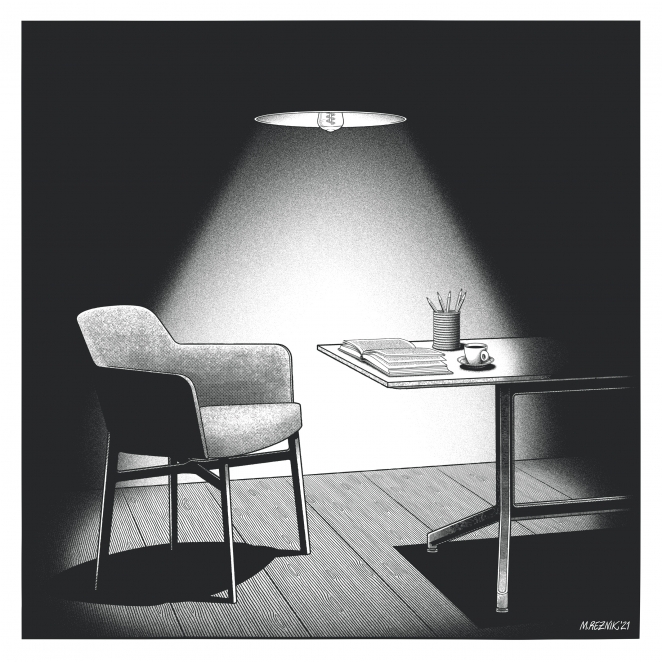 What is one unique aspect of the project?

Influenced by comics and film noir I’ve decided to take a rather uncommon approach to furniture design illustration. The first image was crucial in setting the tone for the whole series. Placing the viewer behind the furniture and addition of some everyday objects brings a pinch of narrative and mystery to the scene. Lack of human presence (the smoker) further adds a “whodunnit” element to the story.

Successive images also feature various objects, which are placed in slightly disorganised fashion, seemingly abandoned, deepening viewer’s curiosity and possibly suggesting a crime scene (newspaper and phone receiver on the floor). The perspective in the images implies someone (the viewer) wondering around and surveying the apartment. 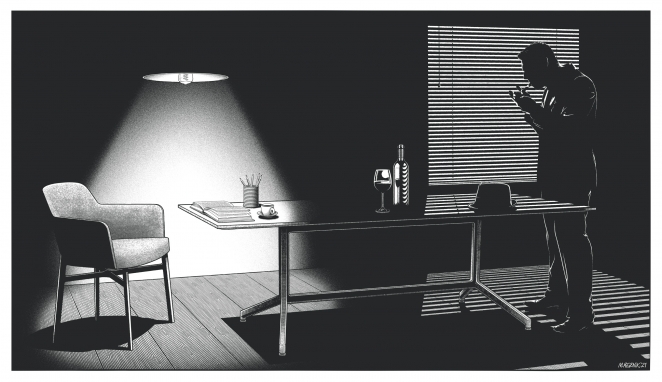 What is one funny or notable thing that happened during the production of the work?

Although initially we’ve decided that the human presence will be suggested only by the scattered objects around the apartment, I couldn’t help but wonder about the smoker missing from the first image. I really wanted him to reappear in the last image closing the series, but Marc was strongly against any human figures in the scenes. I had to find a way to convince him. To achieve that I have extended the fourth illustration and included a barely visible silhouette of the smoker against the window, which also only appears as a scroll option on an Instagram post. Marc really liked this solution and thought it added an element of surprise and closure to the story. 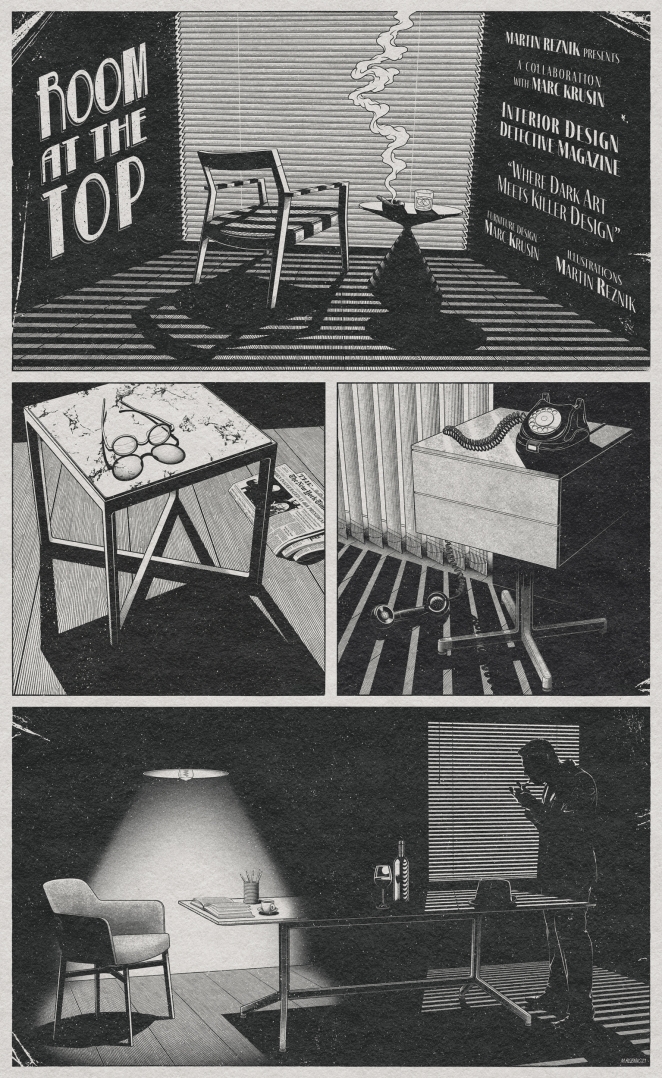 It is hard to say, as it was a very busy period and I was juggling four projects at that time (which all arrived more less at once). Marc kindly agreed that I would deliver one illustration a month starting end of January. I’d say it took roughly 1-2 weeks per illustration depending on the complexity, probably the one featuring a retro phone taking the longest to complete.

One of the aims of the commission was to increase web presence of Marc’s brand and boost his social media channels. I hope that the awards and the recognition that goes with them will further that goal. 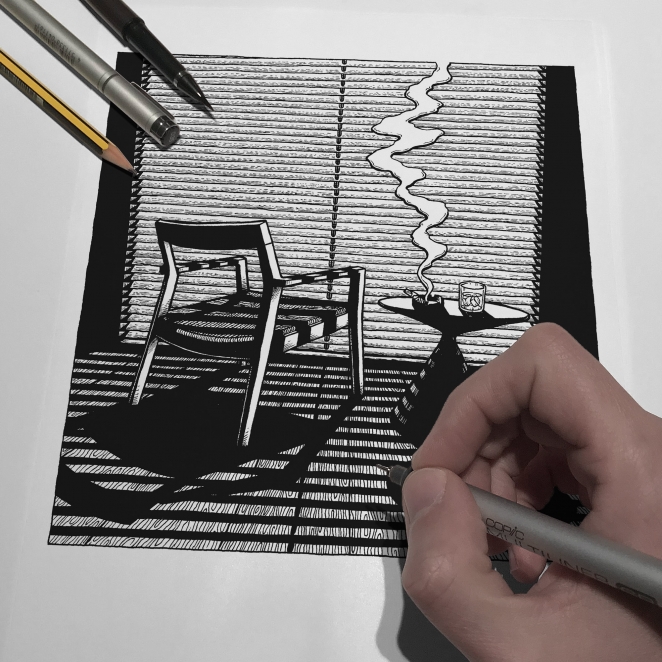 At the end of the summer 2020, we suddenly found ourselves for the first time in nearly 20 years not being able to afford London rent anymore (being both self-employed), so we took the hard decision to leave UK and move to Italy, where my partner comes from originally. I probably don’t have to mention that moving a family of four in the middle of the pandemic to a different country is not a joyride. When we arrived Italy was in a full and strict lockdown (unlike London’s way more relaxed style) and with approaching winter things started to look a bit grim. Having not worked for good few months I welcomed Marc’s commission with open arms. As an illustrator my workflow was not affected by Covid restrictions in a way that a photographer or a video company would be. I guess in a weird way the situation worked to my advantage, as the project provided a much-needed distraction from everyday problems and as a result I put much more effort and heart into it than perhaps I normally would. 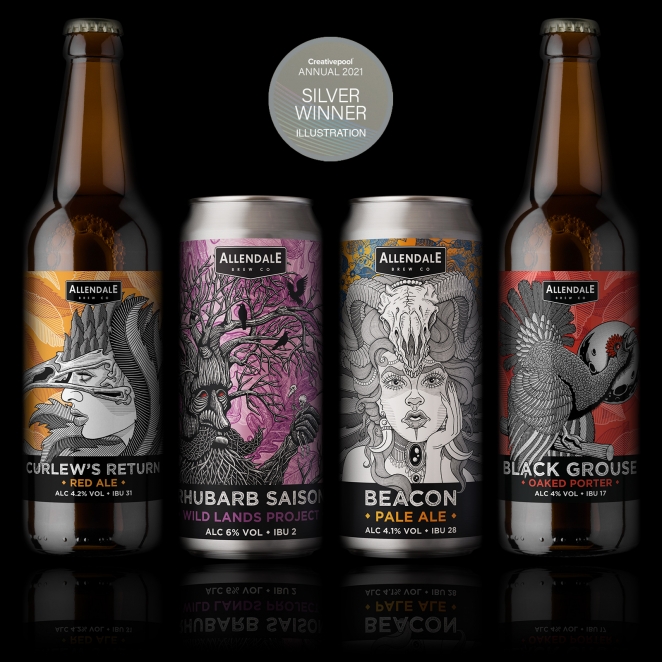 Persevere. I think a lot of people might be discouraged after one or two failures, which they might take personally. I entered quite a few competitions over the years to little or no result, but rather than being frustrated (I was at first), it made me want to improve my process and make better work. There are a lot of overpriced competitions out there (even scammy, so beware), but Creativepool Annual is not one of them, as the entry costs are very reasonable and it has a wide recognition. Think about it this way, for the price of few pints you get your work in front of people calling the shots in the industry!

I took nearly the whole summer off this year to concentrate on some much needed house renovation work, so only recently I started to focus on hunting jobs and promoting my Annual success to the potential clients. I’ve got some work to keep me going, but I hope that the recognition that comes with the awards will bring some new exciting projects soon. 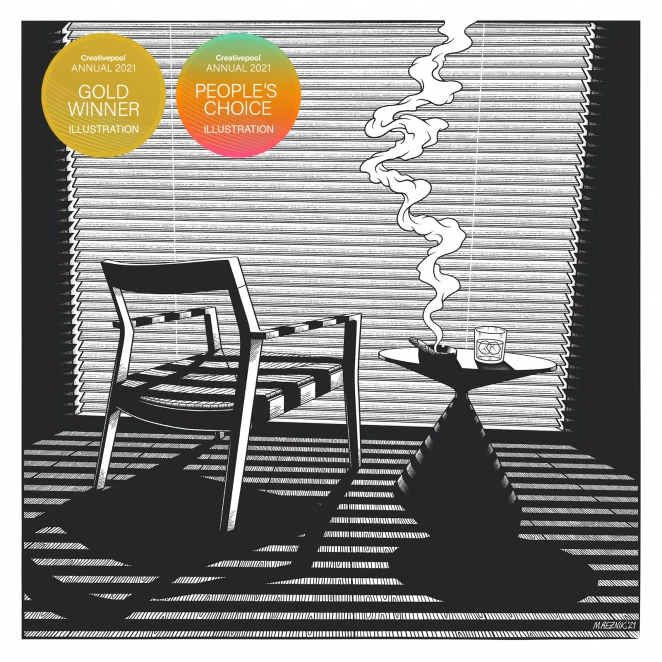 I’d love to, but it all depends if I’ll be lucky enough to get an interesting project commission that allows a similar level of creative freedom. I feel like I broke the bank this year getting three top awards in Illustration category, so I guess the bar is high for next year.

I’ve already cleared the shelf right above my desktop, so now I’m anxiously awaiting the postman to ring my door!

Marc Krusin, who commissioned the illustration, but also proved to be a great art director. Marc was really involved every step of the way offering technical advise on the furniture construction (I wanted it to be as realistic representation as possible in a stylised illustration), but also, more importantly, slowing me down whenever I would start to obsess to much over some insignificant details.

My dear friend Promesto, who is always there for me to bounce some ideas and have a laugh. The idea to connect all the illustrations into one story came up over one of our beer zoom sessions.

Also big thanx to Promesto and my girlfriend for the help with promoting my projects for People’s Choice award and taking 1st and 2nd place respectively!