Embracing the outsider – Understanding an audience of ‘horse girls’ | #MediaMonth

Therése Forssell is Director of PR, Communications & Events at Star Stable one of the few online gaming sites targeted specifically towards girls. The horse adventure game has 25 million registered players worldwide in 14 languages, making it one of the fastest growing companies in Europe.

Below, this incredibly strong voice for women in the media and tech worlds talks of the convergence between brand and community and how digital brands are connecting their virtual communities and trying to find real world solutions to key social issues.

Abercrombie and Fitch’s Netflix documentary documented the brand’s move from their elitist attitude (I’m sure we all remember the totally ‘perfect’ models they had standing greeting customers at the door) to a more inclusive culture. They’ve made that choice because of market demands – the public are making political decisions about where they spend their money, and they want to engage with progressive brands.

And of course, that’s exactly what we did… and it worked. It took a while, we grew gradually, but it got us where we are today. We had trust in the audience, believing they will come if we build something for them. It’s understanding that audience and taking it seriously and making the game they want.

Understanding that audience is what I want to return to now. When you build a community around a game that has said it’s “different” and is a home for anyone whether they see themselves as a gamer, or not, then you have a responsibility to listen and take action to support them.

Having conducted a survey of 16,000 of our community and another YouGov survey of those who are not members, we found that our players are truly a wonderful and eclectic bunch with a broad range of interests and passions.

As a horse-based adventure game though, one finding really stood out – people who play the game or who are involved in the equestrian world are often described in a derogatory way as “horsegirls”. Words respondents said had been associated with them for being horse girls include “obsessed” (48%), “weird” (42%), and “crazy” (35%).

Worse still, almost 1 in 5 (19%) of respondents in the US answered that they had experienced bullying because of their passion for horses.

To view “horse girls” in these negative ways stands totally against our values. We’ve always embraced the “weird” and different. We have several members of the team who started off playing the game who have joined the company.

They bring so much – providing new perspectives and enriching the business in surprising ways. For example, Nomi, one of the artists signed to our Star Stable Music label started as a fan of the game before joining the company where she still she still works as a 3D game artist and animator modelling, designing, and creating horses for the game.

What an eclectic range of skills and passions – we’ll never discover these people if we don’t embrace the different.

Having heard all of this from our community, it would be bordering on negligent not to act when we put embracing difference at the core of our ethos.

That is why we launched the “Ride With Us” platform, which serves as a hub where the Star Stable community can gather in a creative, inspirational, and engaging way. It’s designed to raise awareness and highlight how being involved in the equestrian world improves individuals’ self-esteem, strengthens their resilience, teaches them about responsibility, and builds leadership qualities. 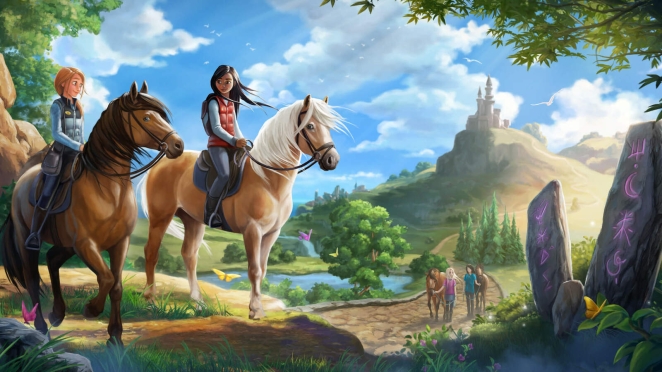 Convergence between the digital and real world is happening incredibly quickly – it would be easy to just keep making a game, but that would be a disservice to all the players who love and have already been inspired. Instead, it’s important to make a difference by supporting what players are passionate about in their digital spaces with how they are treated in the real world.

That means communicating to people through a range of channels – whether it’s through the platform, via billboards, or hearing Nomi’s latest track, which is inspired by “Ride With Us”. We want everyone to own being different, being odd, and a bit “crazy”. It’s these that make the world a fun and interesting place – not treading on people and putting them down because they don’t conform.

So well done to the brands who’ve been doing it as long as us, and hello to the ones like Abercrombie and Fitch who have finally decided to join and Ride With Us.