Dipping an OREO into marmite with style | #BehindTheIdea

OREO has launched a new campaign celebrating all the different and playful ways people eat the iconic cookie and encouraging them to share their quirky rituals and pairings.

Highlighting the unique ways UK consumers enjoy their OREO cookies, the integrated campaign aims to spark conversations on social media around the fun and unexpected rituals consumers have, demonstrating there is no wrong way to eat an OREO cookie. The campaign kicks off with three 15-second films featuring some creative twists to how consumers eat their OREO cookies.

The first film shows two people dipping their OREO cookies into peanut butter and discovering their shared twist. In the second film, we see an unlikely pairing when a dad dunks an OREO cookie in a cup of orange juice, to the bewilderment of his teenager. The final film shows a young lady who’s created her own ritual, twisting and scraping off the cream, while her friend gobbles down the cookie whole.

To get further insight into the campaign we spoke to Laz Nikiforidis, executive creative director at Digitas UK, the agency behind the idea.

OREO is an iconic brand that turned 110 years old in 2022. Across the pond in the US, generations have grown up with the black and white cookie. However, in the UK the brand is still relatively young, having launched in 2008.

Our brief was to leverage the two new OREO products introduced in summer 2022 to continue to drive meaning and relevance for the brand and enhance its taste credentials while exciting people with the two new flavours that add another playful dimension to the original cookie.

We wanted to build on something that was uniquely OREO and bring the brand purpose to life, which is sparking moments of playful connection amongst its audience and doing it in a way that tapped into culture and the conversations consumers were having. With this campaign we started by doing a lot of social listening.

We have a very collaborative process with our OREO partners from Mondelez, who always welcome disruptive, culturally relevant creative. They loved the idea as much as we did, allowing us time to focus on refining the work as much as possible.

We spotted a TikTok from US singer and rapper Lizzo, where she ate an OREO cookie in a completely unconventional way, dolloping mustard on top of it. As controversial as the combination was, that TikTok really reflected the nature of the playfulness of the cookie. Through research we found that people were getting playful and creative in how they enjoyed the cookie.

We discovered a world of underground OREO twisters who were pairing the cookie with mustard and bacon and everything in between. And we wanted to celebrate that. As the playful cookie we wanted to say that there’s no wrong way to eat an OREO, so, we invited people to show us their own playful twists. 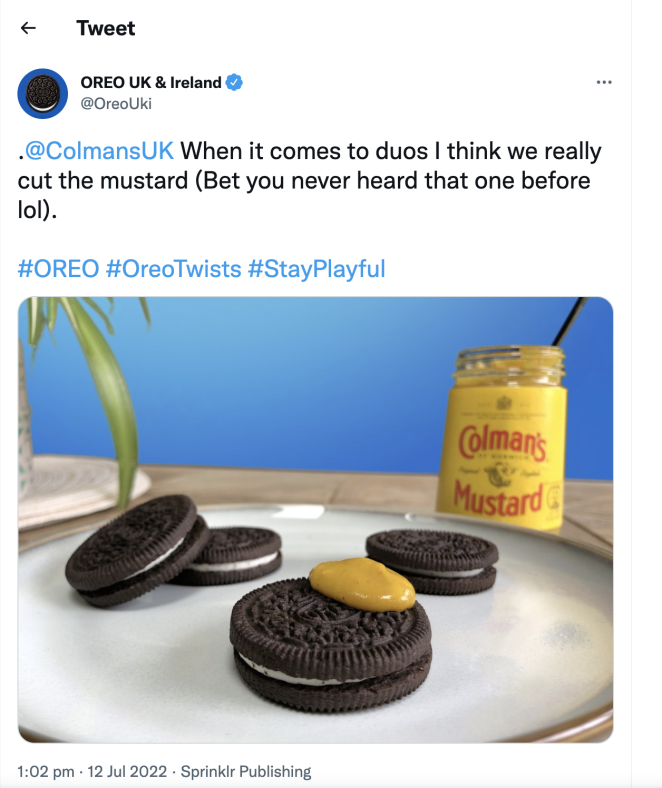 We also started a playful conversation with other brands on social, inviting Marmite, Colman’s mustard, Hellmann’s mayonnaise, Pot Noodle and Papa John’s to pair with us which was fun. And after asking our OREO fans to put their twist on the original cookie, it was time for us to put our playful twist on the original with the launch of two new flavours - OREO vanilla plus raspberry and OREO vanilla plus caramel, the new OREO Twists.

In the second phase of the campaign, in addition to all the social activity, we launched an experiential pop-up in the heart of London. The OREO Twists Lab allowed people to put a playful twist on classic white canvas items including t-shirts, water bottles, sweaters and more, with the help of five talented artists who customised the items, giving them a unique playful look inspired by the new OREO Twists.

With every piece of work, we wanted to make sure that playfulness came across in a way that was truly authentic and inspiring. We worked with a brilliant crew and cast to bring the three social videos to life. All three were shot in a single day which always presents a challenge, as you can’t afford to over invest in one and then run out of time in the end. The secret is always in pre-production. Making sure that you’ve covered every possible detail to then be able to focus on getting the best performances on the day.

The second phase of production where we designed and built a pop-up experience was completely different. As our idea was around design customisations, we were keen to find a space in just the right spot, comfortable enough to feature the workstations for our five artists and our OREO inspired creations.

Collaborating with those five brilliant artists to create unique customisations was crucial in delivering a great experience for the public. The fact that the slots for the OREO Twists Lab were booked out in less than 30 minutes, and the more than 6000 people who visited the pop-up over the two days, made all the stress to get all the details right worthwhile.

Although production felt like a triathlon, where we had to prepare a shoot for three films, then do a photoshoot with OREO dunked in a variety of foods like Marmite, mustard, mayo and noodles – all for a reactive campaign on social inviting famous brands to pair with us on #OREOTwists, and finally design, build and launch a pop-up experience, it was mostly fun thanks to our fantastic production partners across the board. 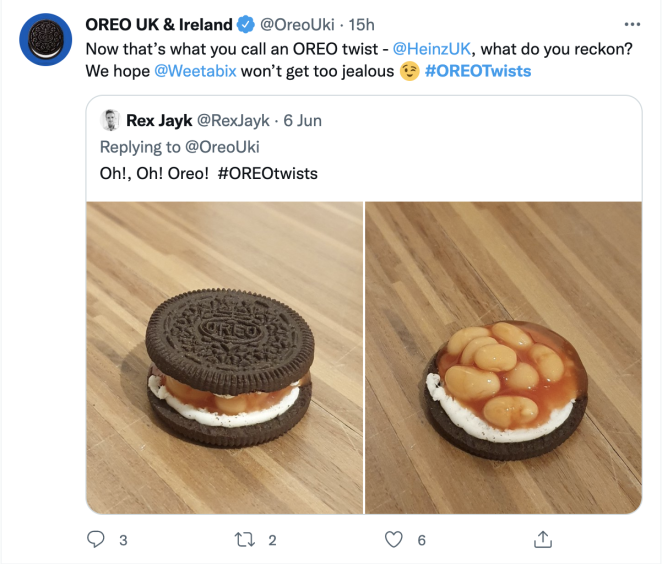 The beautiful thing about #OREOTwists is the fact that while you might find an OREO pairing incredibly tasty, your friend, your kid or your partner may find it weird. And this is exactly what sparks playfulness and fun. Some of the reactions we got during the shoot were priceless.

In one film the fact that two co-workers find out during lunch break that they share the same obsession for OREO and peanut butter was funny enough but the reaction of a third colleague who witnessed the exchange in amazement had us laughing.

We sometimes forget to have fun in life and it’s important to allow ourselves those little outlets where we can let go for a moment and be playful with each other. OREO wants to spark more moments like that in our everyday. And what we love about this idea is that it also shows that when you’re unashamedly you, it’s rewarding.

We spent three months in production for the first part of the #OREOTwists campaign, which launched in Q2 and less than six weeks to design and deliver the experiential pop-up for the second part of the campaign in Q3.

The 2000+ user-generated #OREOTwists posts in just 10 days and 6000+ people who experienced the Twists Lab pop-up shows that OREO is making its playful impact on our UK consumers. Our aim is to bring the brand even closer to Brits through work that is truly diverse, experiential, culturally relevant and, most importantly, authentically fun and inspiring people to truly engage in playful ways. 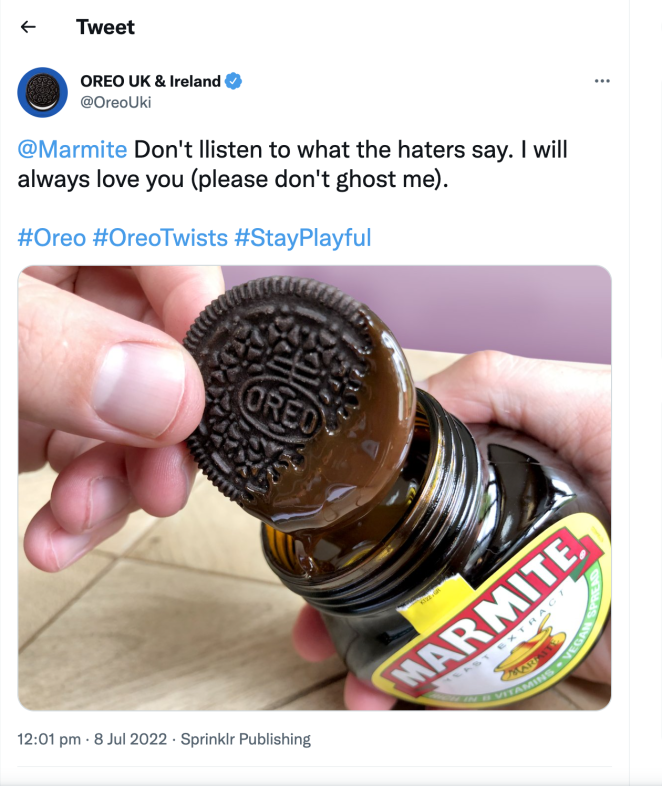 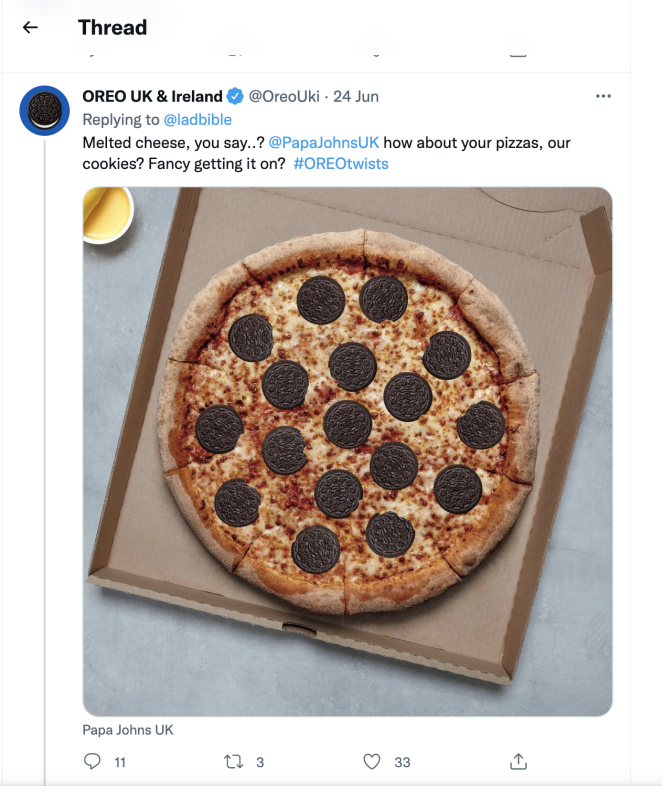