You might have noticed a vandalised Billboard featuring Go Compare's fictional opera singer Gio Compario recently and had a little chuckle to yourself.

But this is not the work of a rebel with a step ladder, this is the latest big-budget advertising campaign from Go Compare who are turning on their very own bellowing mascot in order to turn a few heads.

The TV ads featuring Welsh singer Wynn Evans have been voted as the most irritating advertisement of both 2009 and 2010. 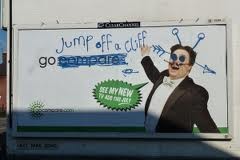 A Go Compare spokesman said: "The graffiti is part of a national poster campaign in relation to our new TV ad."

And he added: "Gio is very important to us, but we realise there are some people that don't love him in quite the same way that we do."

Gio, who is famous for his irritation jingle has been defaced by the graffittied phrases "go away","go and get another job" and, controversially "go and jump off a cliff" which has been slammed by the Samaritans for being "not helpful" and for trivialising a serious issue.

A spokesman at GoCompare.com called the marketing campaign "fun" and dismissed any idea that the posters could be offensive.

"It is a fun campaign and, as the reaction on Twitter shows, that's exactly how people are responding to it."

A TV advert has been launched this week, showing Sue Barker firing a rocket at poor old Gio.

You can watch the ad here

This is a rather ingenious follow-up to the billboard campaign as most people who have only seen their local billboard display will still be thinking it was the work of vandals and the rather bizarre end of this advert will make the penny drop. 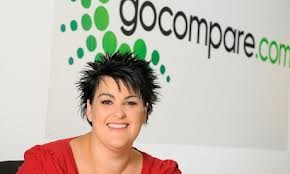 She has recently received an OBE for services to the economy in this years New Years Honors list.

Go Compare have done an excellent job of creating the worlds most annoying character and then slaying him in a satisfactory manner all the while attracting a huge amount of attention to the Go Compare empire.

The Determination of Emma Clayton

They say there is no conventional path into the industry. This was precisely the case of graphic designer Emma Clayton. Emma did not exactly know what she wanted to do when she left school, but creativity was on top of her mind as a plausible...