Christ on a bike! No, Jesus in a marathon

Today I’m on a bit of a high. And not just because I have a rare day off. No, it’s because yesterday I completed my second marathon this year – the 41st BMW Berlin Marathon.

For a while there, I didn’t fancy my chances. About six weeks ago, I decided to ditch my planned Sunday training run and go for a knockabout game of tennis at a new club I was thinking of joining. Mid-game, I lunged for the net…and my right calf quite literally – and quite audibly – popped.

So that was that: training regime shelved and I was on crutches for a while. Most people thought I was bonkers to try and run a marathon so soon after an injury, but I just had to. Fresh (relatively) from my London Marathon debut in April, where I broke the holy grail of a sub-four-hour finish time, I had to give marathon running one more shot before I get too far into my forties. So come hell or high water, I was going to run the Berlin Marathon.

Plus I’d already paid the 100-euro entry and we’d already booked our flights and a nice flat on Airbnb, so I sure as hell wasn’t going to let all that go to waste!

This isn’t a blog about marathon running, however. No, it’s about creativity.

First off, there’s the creativity of the signs from the cheering public. One might think that running 42.195km (or 26.22 miles) could be a bit boring, but taking part in a marathon is like being invited to the best street party in the world where you’re one of the (40,000+) guests of honour. So along the way, a large part of the fun comes from seeing the various signs. I don’t mean the encouraging ones, necessarily, of the “pain is temporary – pride is forever” ilk, but those designed to help us along our way with a cheery smile or a chuckle. Here are some of my favourites:

“Smile if you’re not wearing underpants”

“OMG! The guy behind you is NAKED!” (You’d be surprised, some people ahead of me did actually turn around)

Then there’s the creativity of the costumes. If you’ve ever watched even a bit of the London Marathon, you’ll know that dressing up in weird and wacky costumes is also part of the fun. I overtook Darth Vader and endless pieces of fruit on my 42km run, but one guy in particular really pushed the boundaries to the extent that fellow competitors were talking about him afterwards.

He was dressed up as Jesus…on the cross. Complete with a crown of thorns and loincloth, he was also running the entire race in bare feet. Quite how he coped with the amount of discarded plastic cups he would have had to tread on, I don’t know. He also wore a sign with various slogans on the back, telling onlookers to pray to save humanity. Below is a picture I took myself while overtaking him – hence the graininess. 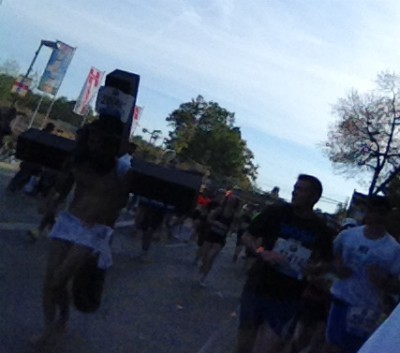 Some light research this morning shows that he also ran in Boston, New York and Tokyo; I’m not sure he’s made it to London yet. So here’s the question: is it bad taste? I’m not sure. My gut reaction was actually yes, but if his motives are good, then it’s hard to argue against it. Either way, it’s certainly creative…

Ashley is a copywriter, editor and blogger. And is a sub-four-hour marathon runner. Get in!