We've been trying to downplay and defuse the COVID-19 pandemic in our intros lately. Sadly, there are some related issues we just can't play with.

The BBC has reported that domestic abuse calls have gone up 25% since the beginning of the lockdown. It is heartbreaking to think that this was likely to happen, as all those who have been victims of some form of abuse will now be forced to spend more time with the perpetrators.

It is an unpleasant note to open a piece with, nonetheless necessary to introduce the work Wunderman Thompson has done back in 2018.

We have reached out to the agency's creative director Jo Wallace, to discuss a campaign that still sounds relevant today.

Well, here’s the thing. There was no brief. We created this work proactively for the National Centre for Domestic Violence, a client we’ve created successful work for previously.

This idea was created back when the world’s collective conscience was focused on football, not coronavirus. The 2018 World Cup was about to kick off and a huge chunk of the world was endlessly debating the possibility of victory. But in amongst all the expected stories and pundit pieces were some shocking stats that revealed a spike in domestic violence was set to happen during the tournament. A research piece concluded that reported incidents increase 26% when England plays, and 38% when England loses.

Two creatives, Maya Halilovic and Jo Taylor took those shocking stats and worked up a concept for the NCDV which they then brought to me. It was one of those moments when I instantly got that hair-raising feeling. I knew it was a brilliant idea and we had to make it happen. Quickly!

The World Cup was kicking off so there wasn’t much time for conversations other than ‘We need to do this, fast.’ With domestic violence incidents about to soar, it was vital we increased awareness around the issue and - importantly - let victims know where they could seek help. The National Centre for Domestic Violence offers free legal advice, such as injunctions which can be life-saving, but not many people were aware of their service.

Sally Emerton, the client contact, reached out to Mark Groves, the CEO at NCDV. Our excellent creative producer, Joseph Bassary, put wheels in motion to shoot the campaign with the photographer Neil Raja.

We needed to let victims know where they could seek help

As time ticked, we waited to hear back from the client. He didn’t respond. Which was unusual, so we made the decision that we would go ahead and shoot now, ask questions later.

He was on holiday, but he let us know immediately that he was excited about the project and hoped it wasn't too late. Fortunately, and much to his relief, we had everything ready to go and were able to release the England execution, just in time.

The stats alone are shocking, so it was key to let them speak volumes for themselves. However, stats are often ignored, so the creative leap to add emotive human context forced people to take notice. Taking a truth: that football fans adorn their skin with their nation’s flag, then hijacking this fiercely patriotic visual language made for instantly iconic work. By reimagining national flags in the form of realistic wounds and bruises across victims’ flesh it forced the public to rethink what the World Cup means for domestic abuse victims. The headline ‘If England gets beaten, so does she’ exposed an unspoken truth. Not everyone looks forward to matches.

And not just in England. Stats show there’s a surge in reported domestic abuse incidents across the globe during the World Cup. So, as new match fixtures were announced throughout the tournament, we worked fast to launch new flags to coincide with specific ‘knock out’ matches – when we knew emotions were running high and victims were most vulnerable. In total we reimagined 5 flags: England, France, Switzerland, Belgium and Japan across OOH, print and digital executions. We also ensured one execution featured a man because whilst 80% of victims are women it is an issue that very much affects men too.

This provocative campaign saw the world sit up and pay attention. We successfully interrupted football chatter and reached millions of people via social sharing and press headlines around the world, increasing awareness and opening up much-needed conversations around domestic violence and where to seek help. 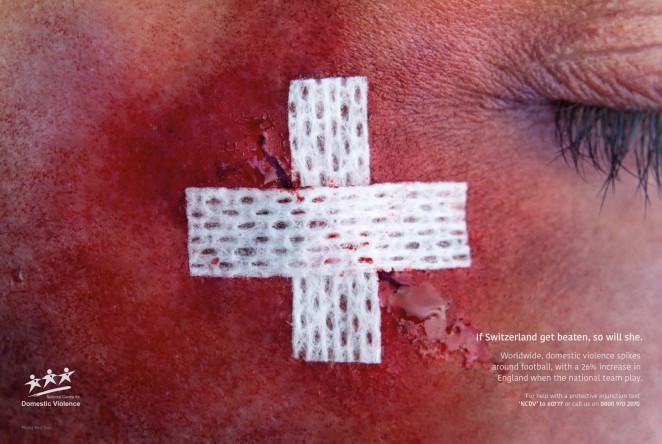 It was a tight team working together to make this happen. Everyone pulled together and pushed it over the line, driven by a passion for the idea and the cause.

Time wasn’t the only challenge, budget was also very limited. The NCDV is a not-for-profit so don’t have spare money for comms. We didn’t have the spend to compete with the hundreds of brands looking to leverage the World Cup.

Creativity was our only currency.

Our social media strategist, James Treen, was vital in helping us overcome this challenge and ensure we reached as many people as possible. Thanks to such strong creative delivering such an important message, various media platforms were incredibly supportive, including Facebook, Ocean Outdoor and the Evening Standard.

What was the main message of the campaign and why was it important?

It was important that we prompted wider awareness of an inevitable increase in domestic violence during the World Cup – we wanted to bring the danger facing hundreds of victims out from behind closed doors and into the public conscience. Domestic abuse is often a hidden crime that goes unreported. Victims live in fear of revealing the situation, for many reasons, so there is a tendency for the crime to be covered up. Increasing awareness of the issue meant friends, family and colleagues could be better equipped to notice signs of abuse and be an ally to a victim.

Which is where the main message comes into play: the NCDV offers free legal advice, often in the form of life-saving injunctions, to all victims.

Why did the final assets resonate with consumers?

The combination of shocking statistics and iconic art direction summarised with a thought provoking headline was impossible to ignore. The first hero piece of creative which was shared on Facebook reached 4.7m+ organically. It was organically shared 40,000 times and generated 30K comments.

What began as a local campaign made global news across more than 100 platforms in more than eighteen countries. It was also cited as London’s ‘most talked about World Cup Campaign’ and was adopted by the Police and National Health Services for their own campaigns to highlight domestic abuse. 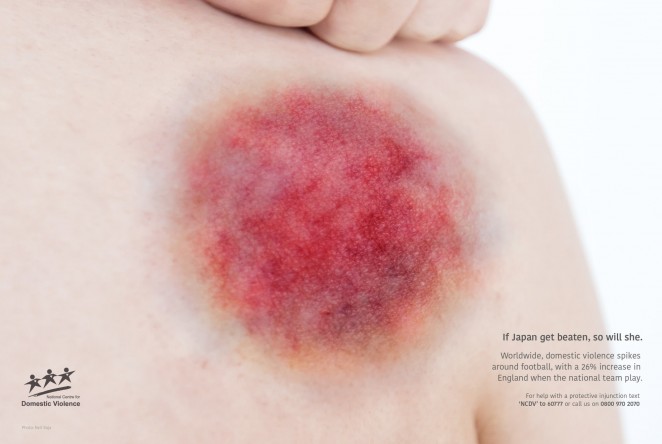 What did it achieve for the brand?

The campaign created organic news headlines in more than eighteen countries across the world, across more than 100 news platforms including: BBC, ABC, Huffington Post, The New York Post and Fox News.

The campaign, and the news coverage it provoked, reached millions of people worldwide, increasing awareness and opening up much-needed conversations around domestic violence and where to seek help.

Even public bodies such as the National Health Service and the police adopted the campaign for their own use.

Being able to use our communication skills to not only raise awareness of such a hidden issue but to specifically help real people in genuine danger is incredibly gratifying.

The whole team and the client are so pleased it had such a positive impact. The fact the work went on to win a plethora of awards, including a Gold Cannes Lion is a happy by-product.

However, the job is far from over and there’s plenty more to be done, especially given that incidents of domestic violence have spiked with the instruction for everyone to Stay Home due to the coronavirus.

So, watch this space, and thank you again to everyone who helped make such an important campaign happen.