Behind the Idea: Committing to Europe in a post-Brexit world

The Guardian recently launched a new dedicated series entitled "This is Europe" which pledges its ongoing commitment to Europe in the wake of Brexit.

To support This is Europe, the Guardian is running a multi-layered marketing campaign in partnership with in-house creative agency OLIVER. “Hope has no borders” included a takeover of all 36 screens in the Eurostar departure lounge at London St Pancras earlier this month (2 March).

The bespoke marketing was created with this unique setting in mind, making use of a moving departure board design based around the ‘Hope has no borders’ theme. The messaging expands on the Guardian’s ‘Hope is Power’ campaign last year and follows the recent Guardian Weekly activation in Berlin.

The creative features a yellow banner promoting the Guardian’s This is Europe series, alongside a rolling departure board design with a constantly changing interface; shifting from messages such as ‘the climate crisis has no borders’ and ‘inequality has no borders’.

The design lends itself to its setting, highlighting a series of important and globally relevant issues as passengers enter and depart from the international station. The messages finish with ‘hope has no borders’, acknowledging that while there are lots of challenges we face around the world, hope can also empower and bring people together across divides.

To gain further insight into the creative, we caught up with Kate Davies, director of brand and awareness at Guardian News & Media (far righr below) to go behind the idea. 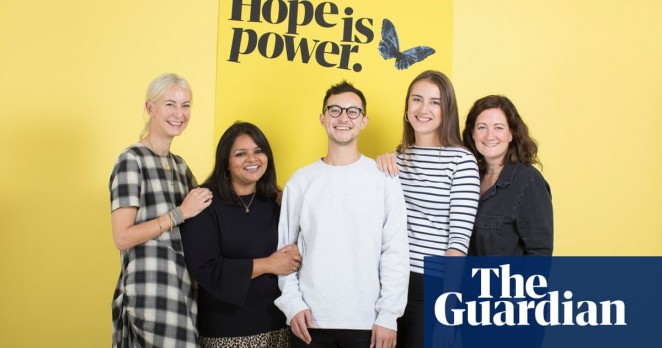 The Guardian has always been a pro-European news publisher, with an audience across the continent. We saw a significant increase in traffic coming from European countries (outside the UK) around Brexit, and they have continued to stay with us.

We wanted to reaffirm our commitment to journalism in and about Europe, and to our readers. To this end, our editorial team developed a new editorial series, This is Europe.

One of the key ideas behind the series was to reinstate the Guardian’s long-term commitment to Europe, kicking off with a special week-long series of in-depth reporting, interviews, features and films on Europe, plus a new dedicated space on the Guardian’s digital front page for European readers. As the project developed, we soon realised This is Europe also had the potential to be a big brand moment for us.

The series was announced by the Guardian’s editor-in-chief Katharine Viner in an article where she underlined the Guardian’s European heritage and a continued commitment to an international perspective and audience.

So the brief was quick and fairly pointed — how do we find a way to reflect our meaningful, purpose-driven journalism, while also thinking about how we link This is Europe to our most recent marketing campaign, Hope is power.

The joy of working with in-house teams is that conversations can happen quickly and organically at our desks. We gathered people from editorial, marketing, communications and our in-house creative agency OLIVER to discuss ideas.

We had a strong foundation to build on with Hope is power. We knew this idea linked to our core purpose and needed to drive our thinking, but the challenge was connecting it to This is Europe. Our editorial teams shaped the language for the new series, which they developed continuously up until launch, so we worked in parallel sharing our creative thoughts.

Sam Jacobs (Creative Director, OLIVER) and the wider team focused very quickly on the idea that the big issues of our day transcend borders — reflecting the approach in our journalism.

The reporting of our editorial team is incredibly varied so we had lots of issues to reflect on. There was plenty to consider, from the climate crisis to poverty to big data, but not everything could make it into the final creative.

The concept really landed when we spent time on our manifesto — it’s an important part of how we develop brand work here, as words are very important to us.

Using the language from our editorial colleagues, we loved their line on ‘the challenges that confront us and solutions that unite us have no borders’. We built on this and started to think about the unifying issues we face every day around the world and naturally found our way to Hope has no borders.

The values we share with our readers at the Guardian means we are well-placed to report on stories that offer hope and unite us. I am hugely proud of the concept behind this creative, as it combines a powerful message with an eye-catching design that perfectly fits its out-of-home placement.

The advert provides a stop-and-stare moment for travellers that is equally impactful when seen online or on social. This unique design was a brilliant creative opportunity to support the Guardian’s new This is Europe series and a natural next step in expanding on our ‘Hope is Power’ campaign last year.

Fast! After the concepting and art-direction stage, our motion graphics designer did a lot of the heavy lifting. The team worked closely with the Guardian’s editorial design team to make sure the work on-platform, on social media, and out-of-home felt seamless. 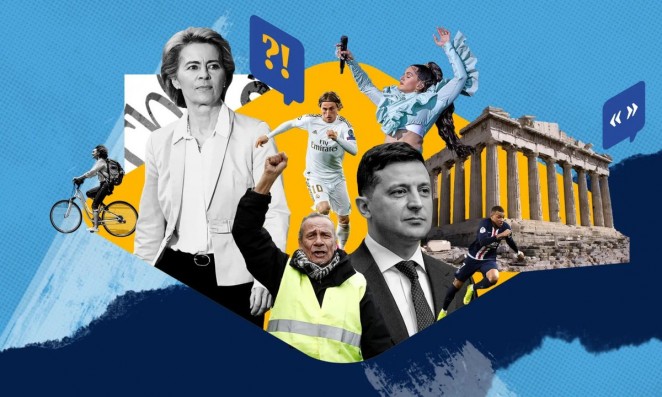 Were there any challenges to overcome?

Initially, we led with our black and yellow brand palette, but the editorial design was heading in a different direction — there was a quick re-alignment needed at the end, but it made the work even better.

The world is becoming increasingly fractured. Not only Brexit, but also hard political divisions in other countries, and the rise of populism across the world. Our journalism resists this retreat — we strive to have a broad lens and continued commitment to our international audience.

We are an open news platform and the values we share with our readers at the Guardian means we are well-placed to report on issues that affect us all, and that by offering facts and discussing new ideas we can offer hope and a space for unity and meaningful debate.

The message of the campaign — Hope has no borders — doubles down on this. The message was a brilliant creative opportunity to support the Guardian’s new This is Europe series and a natural next step in expanding on our Hope is Power campaign last year.

I am hugely proud of the concept behind this creative, as it combines a powerful message with an eye-catching design that perfectly fits its out-of-home placement. Part of our approach, especially for out-of-home, is to create contextually relevant work.

Media choices are really important to us and with this work we wanted to try and get as close as possible to an actual border and to talk directly to Europeans. The Eurostar departure lounge felt like a compelling option.

When we’d decided on that location, we wanted to create work that felt contextual. If you are waiting in a space, with not much to look at media-wise, apart from departure screens, our message would subvert expectation. We hoped that using that element of surprise would be somewhat jarring and would make people think about the issues discussed.

This would hopefully resonate and make them curious enough about the series to check it out. The advert provides a stop-and-stare moment for travellers that is equally impactful when seen online or on social.

Are you worried it could prove in any way divisive, given persistent conflicting public opinion on the subject?

Although Brexit was divisive, this is less about that. Hope has no borders is about looking forwards and outwards and reaffirming the Guardian’s commitment to Europe and our global audience.

The Eurostar media buy and partnership. We worked quickly with our partners at PHD on a media approach. We had a limited budget, so how we activated this idea off our platform had to be very smart, very focused and very relevant.

We explored different options, from more punchy experiential to quite traditional. But in the end, the Eurostar partnership was perfect. It gave us context, an international audience and a really striking platform.

The fact that we ‘took over’ all of the 36 departure lounge screens gave us the impact we needed, but with the creative flexibility of motion. Also, 1,000 copies a day of our paper, wrapped with the Hope has no borders message on all trains and in departure lounges was a perfect way to get this idea out there. 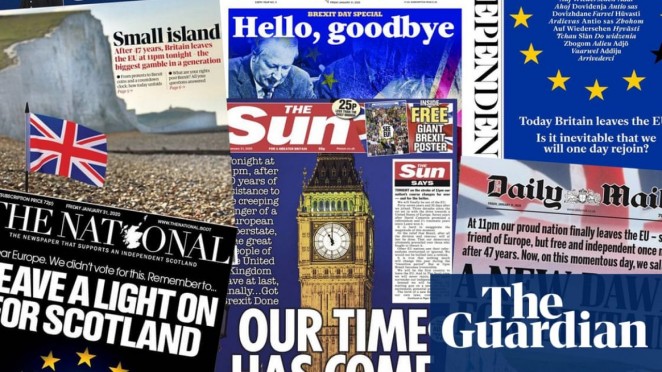 I would like for Guardian readers to feel excited by these ideas and to feel part of these moments with us. Our readers should recognise themselves in the brand activity we do. I also hope they also find it challenging, brave and a continuation of our Hope is power message.

It is a huge group effort, so a collective sigh of relief. But the job is not done — our journalists and editorial teams here will continue to work on This is Europe and we are always looking for more ways to talk directly to our readers about the issues that matter to them. 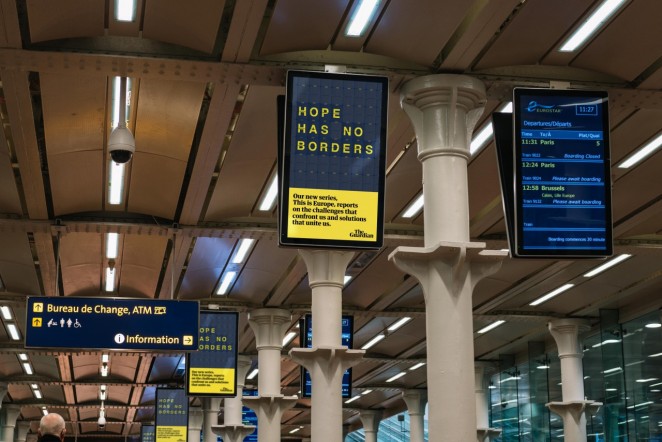