Behind the Idea: Bringing Honda back up to speed

Valtteri Bottas may have won the 2019 Japanese Grand Prix at Suzuka yesterday but the prize for the coolest ad to promote the event goes to Digitas UK and Honda.

The high-octane animation is a collaboration with Mainframe and a sequel to the Powered By Honda film released in April earlier this year.

It marks Honda’s return to success in Formula 1 in the run up to the Japanese Grand Prix while showcasing some of the key moments from Mexico 1965 to the 2019 Suzuka circuit.

Below, Jonny Palmer, creative lead on the project talks about the concept and creative challenges that came with the passion project.

Build on the success of the Powered By Honda season launch brand film (below) and help us celebrate Honda Racing’s efforts and build excitement ahead of the return trip to home turf – the Japanese Grand Prix at Suzuka.

The launch film earlier in year was based heavily around the wider Honda brand and its influence on the Honda F1 programme. Our early conversations with the client were mainly around what story we felt it was best for them to tell now, at this phase of the season, and how we bring to life more of Honda Racing’s Formula 1 story.

I must admit, the first two territories initially fell flat. We were trying too hard to capture lightning in a bottle again. After discussions with the client and a few back and forths on directional feedback, we settled on a third way that seemed to marry the best parts of the two first options into a more perfect vision – and the client loved it.

Additionally, from a look and feel standpoint, we’d spent a lot of time back at the start of the year developing the style of animation used in the Powered By Honda film, and while we pitched a variety of different styles for this film in the early stages, the overall consensus from everyone – agency and client side – was to continue with it.

We set out to showcase Honda in its pursuit of progress as it builds towards 2020, with the Japanese Grand Prix a key highlight at the back end of this season.

Taking inspiration from the days of [Richie] Ginther, [Ayrton] Senna and Jenson [Button] and immersing them with the current 2019 driver line up in an ‘Endless Race’ (the original name pitched) enabled us to add emphasis and grandeur to the upcoming Suzuka event. Being able to put the current team side by side with some of the greatest moments from F1 history gave great perspective on how much this weekend means to the brand. 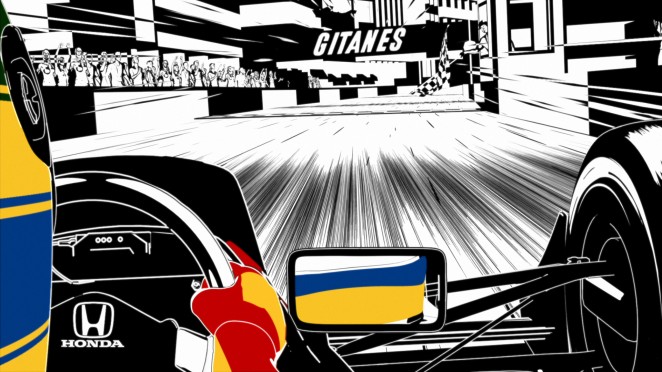 As we were continuing on with the same look and feel from the first film, it was a clear choice to work with the talented MainFrame again to help bring the story to life. One of the challenges we faced was to progress further with the style and introduce new visual elements that the audience hadn’t seen before.

Within the film there are multiple mechanical transitions as the cars transform between the different models. One thing that MainFrame were able to amplify was the amount of detail they brought into these shots. The tight close up shots of body work manipulation, wings bending and suspension folding – they just smashed it. Blend that with the transitions to and from real world footage and we knew we were onto a winner.

Finally, we had that incredible sound design from String and Tins. Again, dialling up the magic of those mechanical sections and really making them sing. I enjoy re-watching these parts a LOT.

When Honda first returned to F1 in 2015, it had a few tough years and took a lot of criticism. Alongside new teams and partners in 2018 and 2019, Honda is beginning to show what it can bring to the sport. With the 2019 season still a bit of a ‘learning curve’ for it, the campaign had to balance the passion and glory of Honda’s past successes with realistic expectations of where they are on track now and their goals for 2020.

Having worked with Honda for a number of years, one thing that is both undeniable and admirable is their relentless desire for improvement, whether they’re at the front or back of the grid. From this sentiment, ‘The Finish Line is Never The End’ was born. 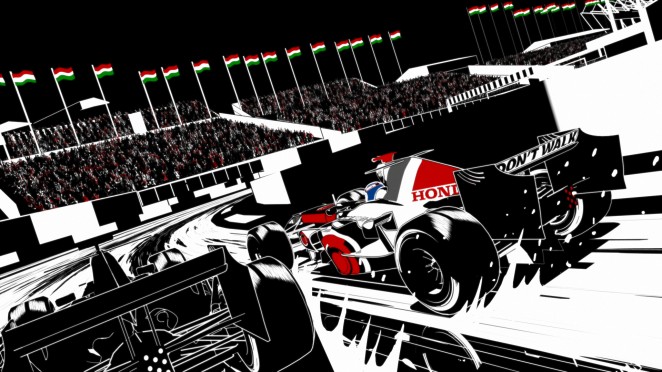 Why will the ad resonate with consumers?

One thing we really wanted to do as we crafted the script was to keep a very human and light-hearted feel to the film. The moments of human emotion, Jenson and Ginther pumping their fists as they cross the line, the orange army cracking beers open as [Max] Verstappen flies around the Red Bull Ring, the lion roar on the top of the helmet – these are all moments that helped us keep the tone of the film exactly where we wanted it.

Looking at the film with the eyes of a hardcore F1 fan, we wanted every detail to be as accurate as possible. Which is why every engine rev, gear change and power unit gurgle is from the actual car. Hearing it all come together in the sound studio is something I won’t forget for a long, long time.

We were briefed at the back end of May, presented ideas in June, and went into production in August. It was pretty much full throttle from there. We knew we had the Japanese Grand Prix to aim for and it went live the Tuesday before.