Behind the Idea - Fixing a cultural defect

A powerful campaign from TBWA\Helsinki for iconic Finnish media brand Demi features powerful images of young people looking in the mirror and seeing things they think should be improved in their reflection.

Problems with self-esteem and self-acceptance are more common than ever before in young people. Social media and its many beauty filters distort the self-image of children and young people. Media has the power to influence the current standards of beauty – either by adding the pressure to look a certain way or alleviating it.

This campaign hopes to open a conversation regarding the pressure of the many beauty standards teenagers have to face thanks to the dreaded ‘Snapchat dysmorphia’. Brands are taking action (even Instagram has announced the removal of all selfie filters imitating the results of cosmetic surgeries) but there is still a long way to go.

We caught up with the team at TBWA\Helsinki to discuss the campaign in a little more detail.

Self-esteem issues among children and teenagers are on the rise, even in the Nordics and they are amplified by the false realities propagated through social media. Finland's leading youth magazine “Demi” has always raised discussion and provided support to kids and teens and naturally felt responsible to act upon the issue. It did this by taking advantage of the fact it’s part of one of Finland's biggest media houses and is capable of reaching out to a vast and varied target audience.

TBWA\Helsinki's Creative Director Erno Reinikainen had a dramatic visual idea (pretty much as seen in the campaign now) that worked as a backbone for the message. The mechanics of the campaign were then structured around these unique visuals and the accompanying message.

The issue itself has been brought up by some brands and NGO's recently, but has often failed to transform awareness into action or behavioural change. So, there was a definite need for stronger dramatisation leading to discussion, dialogue and action. Traditionally, images like these are shot in a controlled studio environment and the photos edited in post-processing to look plastic-like. The viewer recognises it easily as advertising – something that is not necessarily true. That’s why we tried to create realistic, yet dramatic, real-life looking photography for the viewer to identify better with the people in the images.

The cause was great and the idea/dramatisation strong, so we were able to get the production and people onboard easily.

The main message was that we are faced with this cultural defect that is not going to be fixed by rules and limits. Social media, with all its good and bad qualities, is here to stay, after all. Instead, we should focus on promoting a dialogue on the realities and illusions created by the distorted beauty norms of social media. And also focus on 'fixing' the mind, as the copy says, and not fighting the unbeatable platform.

This kind of visuality has not been used in this context before. We hope it’s dramatic and strong enough to trigger thinking which would lead to action.

The campaign and the assets were actually ready a few weeks after the initial idea, but we waited for a few more to be able to launch in time for the new year resolutions push, which was the theme for the commitments made by people to progress the cause.

We hope it leads to increased dialogue and discussion around the topic AND between parents and children. And through that, behavioural change. 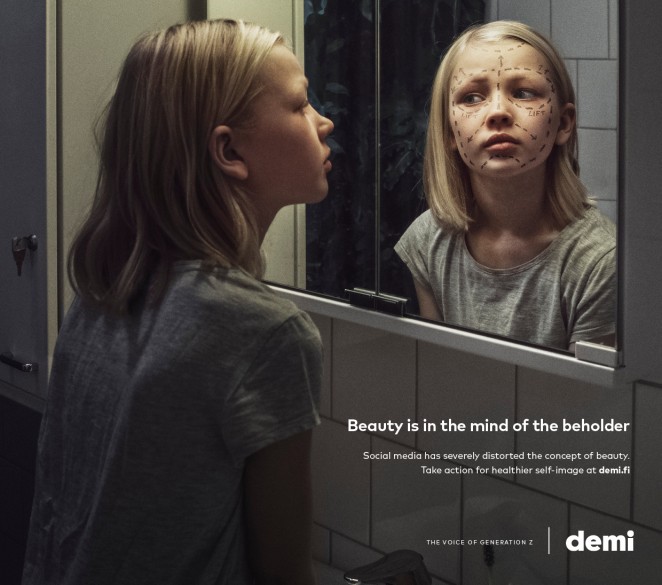 If the stated aim of the campaign is to start discussions about self image and self esteem between parents and children, I would like to know more about how this campaign is expecting that will happen and how success is going to be measured.

Matthew Huntley lives and breathes film. You can say that of many directors, but for few it is as true as with him. Constantly looking for inspiration, endlessly focused and with a specialism in documentaries, Matt is a prolific director/filmmaker...