Co-working seems to be something of a hot topic in London at the moment, and considering the ever-escalating cost of living in the city, that's hardly surprising. Just last week I reported on the Collective Old Oak complex, and now, a New York-based co-working company is looking to get in on the action in a unique and thoroughly British way. Bar Works operates a growing chain of co-working spaces aimed at entrepreneurs who are looking for affordable convenient work space in attractive locations, and the company has a rather ambitious plan for the UK's iconic red public phone booths, which have become woefully underused in the decade or so since mobile phones became commonplace: Turn them into micro offices for workers on the go.

Bar Works will launch the project, known as Pod Works, in London, Leeds, Plymouth and Edinburgh as a more private alternative to co-working spaces and cafe offices. The company is retrofitting each phone box with Wi-Fi as well as a printer, scanner, wireless mouse, 25-inch screen, hot drinks machine and power outlets. A £19.99 monthly membership fee to the Pod Works “Club” will grant users around-the-clock access to the booths via an app, which allows access any time day or night. Bar Works, which has leased 23 red phone boxes via the Red Kiosk Company, expects the first pods to be operational in around eight weeks. 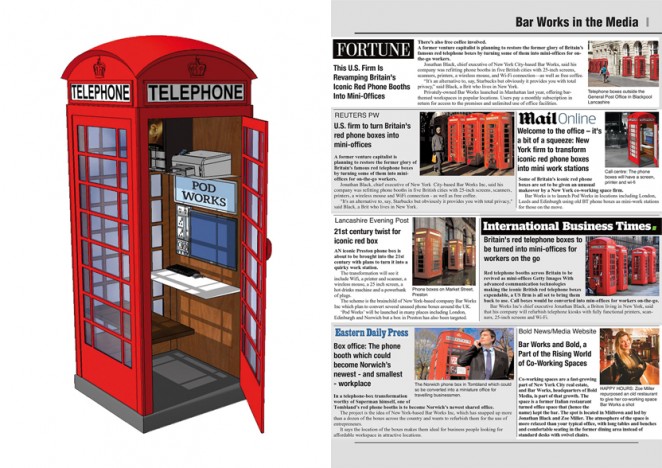 Pod Works intends to grow a network across the UK starting in London, Leeds and Edinburgh and membership will also allow access to Bar Works locations which currently include New York with London and San Francisco opening soon. The company is also planning to turn other BT phone boxes which are no longer in use into work stations and will gradually expand the concept into major cities across the UK. Bar Works CEO, Jonathan Black said: “Entrepreneurs and others constantly on the move need a convenient, affordable and private place to work. Why should they sit in Starbucks or any other coffee bar when using one of our Pods will allow them to truly focus on their job before an important meeting or presentation at less than the price of two cups of coffee a week.” 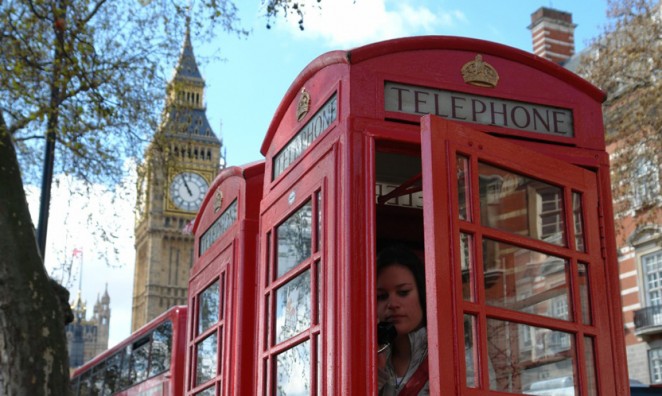 The UK's distinctive red phone boxes originate from a 1923 design called the K2 by English architect Giles Gilbert Scott, whose projects included the now famous Battersea Power Station. A smaller, cheaper version of the design was installed in the late 1920s, followed by the short-lived concrete K3, but the K6 model from 1939 was the most successful version and was used across the country for decades. Later versions by other designers include the K8 by Bruce Martin, rolled out during the 1960s, which featured large square panes of glass, but failed to find the same success. Many red boxes were replaced with the less popular open-fronted KX kiosk in the 1980s and 90s. The rise of the mobile phone, of course, has made all of these designs increasingly redundant, and an growing number are being removed or taken out of service.

“Our solution maximises the space, and we have a solution for security and membership-only access together with the other problem of people using the space for too long”

The question of what to do with the phone booths has prompted a number of creative solutions in recent years. One in London contains a salad bar, some have been fitted with life-saving defibrillators, while others have been transformed into fish tanks in the name of art. I think the idea of turning them into working spaces, however, definitely makes the most sense. It might seem like a tight space in which to work, but I've honestly worked in smaller spaces in my time, and as a general concept, it certainly beats the questionable “GuyFi” booths that popped up in New York City earlier this year. I'm not going to go into any further detail here because it'll make me sad, but trust me, you don't want to know!

Benjamin Hiorns is a freelance writer and struggling musician from the dark heart of Kidderminster in the UK. He'd definitely consider using a Pod Works. It has to beat the idea of hunkering down in the back seat of your car to steal free Wi-Fi in a McDonald's car park.