Sheffield Children’s Hospital has been brightened up once again with illustrations created by artists including Jon Burgerman, which aim to “provide distraction” for young patients. The project has been funded by Artfelt, the Children’s Hospital Charity’s arts programme, which commissioned Burgerman, Thomas Burden and Andy J. Miller to redesign the interiors of the hospital’s new wing with colourful, illustrated characters. 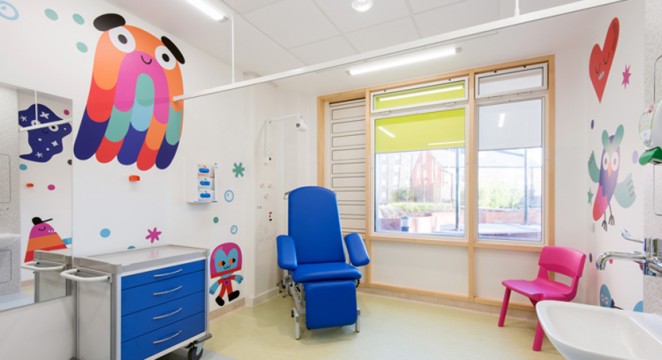 The artists have transformed the waiting room, treatment rooms and plaster room, where patients go to have casts put on when they break bones. This is the second phase of the hospital’s art project, which saw designer Morag Myerscough fill 46 ensuite bedrooms with colourful, geometric patterns earlier this year.

The plaster room now features dozens of quirky and playful characters illustrated by Burgerman, to create a distracting and engaging space for children. Burgerman hand-drew the illustrations with felt-tip, then scanned and coloured them in digitally. Miller, meanwhile, worked on the treatment rooms, and Burden transformed the waiting area, creating a series of illustrations inspired by childhood toys using lenticular printing, which gives two-dimensional graphics depth and makes them look as if they are moving or changing.

Sean Nolan, orthopaedic practitioner at Sheffield Children’s Hospital, says the new designs have helped distract young patients when they are undergoing “difficult treatments or are in pain from injuries.” He explained: “All I have to do is ask them to find the cat with the slippers in its eyes, or the man made out of pizza, and they can forget about their treatment for a minute. It’s really transformed the space so we can provide the best possible care for our young patients.” Cat Powell, manager at Artfelt, added that this redesign is part of a wider pursuit to “strip away notions of hospitals as clinical and cold spaces.” She said: “The artists have helped create a new part of the hospital where art is not an afterthought, but part of the very essence of the building.”

Artfelt originally worked with the hospital’s new build team and practice Avanti Architects to create the new wing with this in mind, she adds. Further work is planned on the hospital wing’s development, with Myerscough set to create more designs for the space in the future.