Peanuts! A children’s comic strip, with the coolest dog in the world, reaching more than 350 million people in 75 countries. But a comic strip way ahead of it’s time, addressing modern day neuroses such as anxiety, loneliness and heartbreak – issues that are magnified under the microscope of social media.​

A look back at historical events shows that Peanuts was always in tune with current events, if not ahead of the curve. Franklin became one of the first prominent black cartoon characters in 1968 at the height of the Civil Rights movement. Even in the 50s, in some of the earliest strips, Lucy was portrayed as a strong independent girl, taking no nonsense from the boys. And Peppermint Patty became a gay rights icon and challenged gender norms.

So what more relevant time than now for the first ever exhibition dedicated to Charlie Brown and his gang, on now at Somerset House in London. 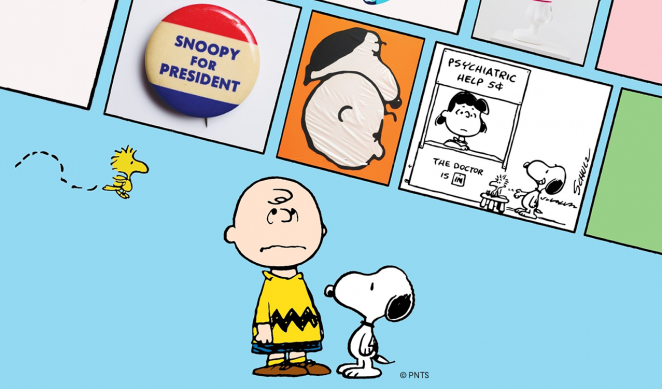 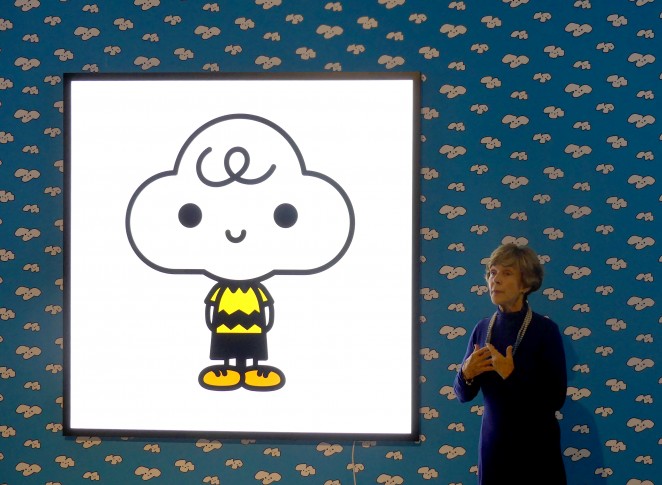 BUT WHO WAS CHARLIE BROWN?

Charlie Brown was in fact a name taken from a co-worker of Charles M Shulz, in his first job in a drawing office – just a name that seemed to work, and he soon evolved into the main character in Peanuts (which was originally called ‘Li’l Folks’). Schulz also had a dog when he was young called Spike, which used to perform tricks and it became the model for Snoopy. Over time, characters became more refined and Shchulz’s mastery of simple line, language, sounds and emotion came to the fore as the comic strip grew in popularity. 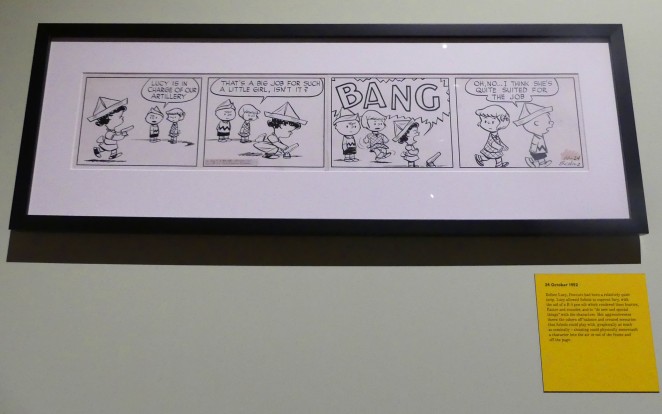 Lucy makes her presence felt in a strip from 1954

Schulz displayed an understanding of the more sensitive side of the human psyche, often with humour – even to the extent of mocking the rise in popularity of (money-grabbing) personal shrinks in the US with Lucy’s psychiatry booth (5 cents per visit!). Many strips dealt with failure, loneliness and worries – today’s preoccupations as well as back then. The phrase ‘security blanket’ actually came from the strip for Linus’ constant support. Complex thoughts were made accessible to a wider audience, young and old, through these characters. For this exhibition, artist Marcus Coates has set up a booth for people to meet and talk, to create a ‘self-portrait of our own neuroses’. 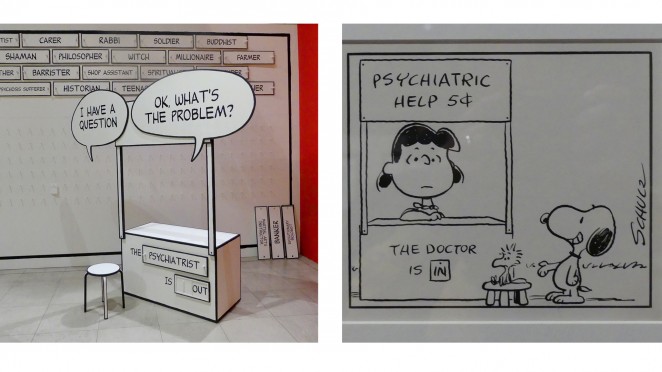 The cultural impact of Charlie Brown and gang really took off in the 60s – Snoopy was the official mascot for the US space program, and in the 60s there was a campaign to elect him as president (a saner choice than Richard Nixon perhaps). Obviously merchandising went through the roof, but this popularity gave Schulz a platform to use Peanuts as for social commentary, giving Lucy, Peppermint Patty and Franklin prominent storylines. One of the 80 original strips on show Franklin talking to Charlie Brown about his father being sent to the Vietnam War.

Strip from 1968 discussing Vietnam with Franklin and Charlie 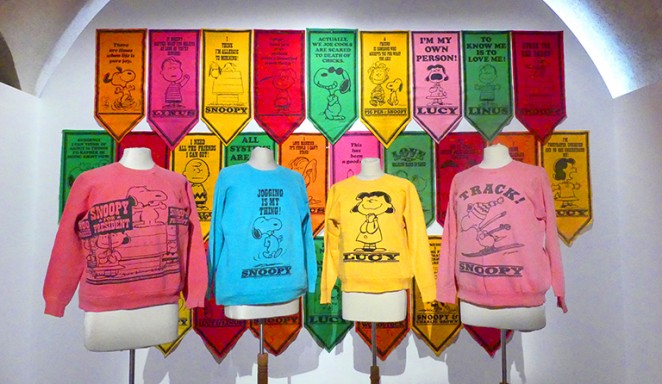 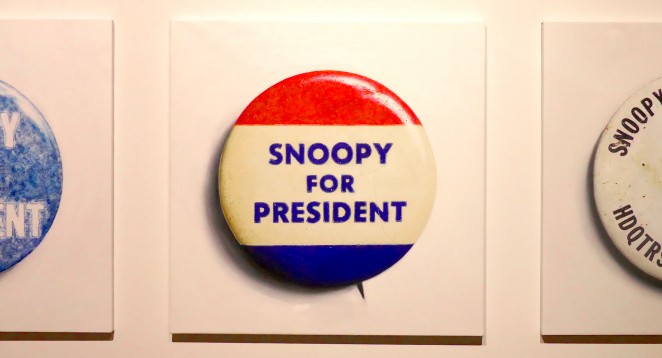 THE ART OF PEANUTS

Modern art was often referenced – Snoopy had a Van Gogh in his kennel in one strip – so it only seems appropriate that modern artists should show their interpretations of the strips. As well as the aforementioned booth by Marcus Coates, KAWS has created his trademark crossed-out eyes screen prints of Snoopy. Lauren LoPrete has created Morrisey-approved cartoons using lyrics of The Smiths. The more Lauren LoPrete listened to the Smiths, the more she came to see the band as a sort of ‘Peanuts for the ears’. Resident Somerset House artist Matthew Plummer Fernandez worked with children to see what they thought would make a better future. He then created an AR app where placards with their hopes can be placed virtually in public spaces. Characters in Peanuts without voices, such as Snoopy and Woodstock, often communicated using protest placards. 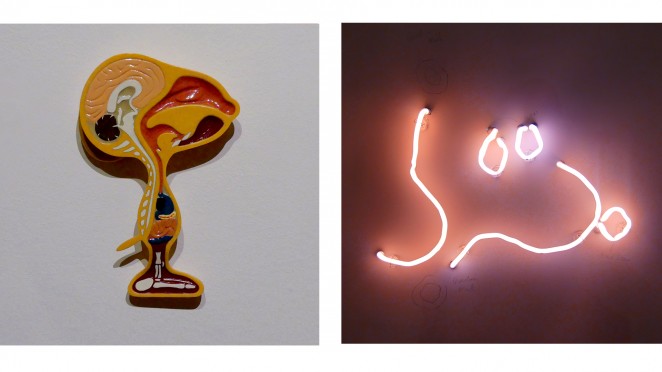 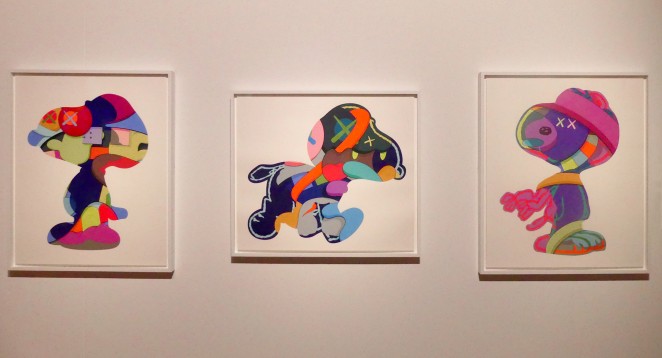 A MIRROR TO MODERN SOCIETY

“Peanuts was more than just a charming comic strip,” says Claire Catterall, exhibition curator. “It addressed some of life’s more dark and complex themes, such as anxiety, depression and failure, but did it in a way that was gentle and funny.” Umberto Eco also thought Peanuts looked into the darker corners of human life. “These children,” wrote Eco, “are monstrous infantile reductions of all the neuroses of a modern citizen of industrial civilisation.”

GOOD GRIEF, CHARLIE BROWN! CELEBRATING SNOOPY AND THE ENDURING POWER OF PEANUTS is on now until March 2019 at Somerset House, London