Agency of the Week: Wieden+Kennedy

Last month, Wieden+Kennedy Portland and Old Spice gave even more Isaiah Mustafa and Terry Crews, otherwise known as “The Old Spice Guys.” Whereas before the two men appeared in their own separate spots, now the brand seems intent on doubling down with their mascots, having them battling each other for scent supremacy. For the first time, Old Spice brought Crews and Mustafa together in “And So It Begins,” where the duo helped blokes make a commitment to their favourite Old Spice scent.

The latest spot, titled “Windsurfing,” starts with Crews (who can currently be seen in the actually rather brilliant Brooklyn 99 sitcom) kicking his way through an image of Mustafa and telling people to ignore all other Old Spice commercials. But “The Man Your Man Could Smell Like” returns fire by forcing Crews to unwittingly take part in a recreation of his most famous joke. It's a smart direction to take the campaign in, and manages something that only Americans can pull off with aplomb; to be over the top without being irritating. In fact, it's the OTT style of the campaign that sells it. Also Terry Crews might just be the funniest non-comedian alive right now.

The epic journey of the runner plotted for Nike

A cinematic new spot from W+K Portland for Nike Running, shows us that history might remember the victors, but runners who tackle races for sheer pride and personal goals, rather than pace, are rarely recognised. As the Autumn marathon season dawns on us, the film, simply titled “Last,” celebrates not only the last athlete who crosses the finish line, but also the imperfect journey of every runner, with the message that anyone can be a runner; all you have to do is run.

For many British beer drinkers, the very concept of a low calorie brew might sound laughable, but overseas, beer that won't give you a beer belly is actually quite popular. So Skol, the most popular beer in Brazil, has introduced a new low calorie beer to the South American market called “Skol Ultra,” which contains fewer calories and carbs, and is the first beer of its type in the Brazilian market. To promote this waist-defying beverage, Wieden+Kennedy São Paulo created a nation-wide campaign inspired by the classic Nina Simone song “Feeling Good,” which depicts the daily lives of everyday people they refer to as “Unofficial athletes,” who find time to be physically active despite their other commitments, like work, family and friends, and also enjoy a cheeky beer every once in a while.

Otavio Schiavon and Marco Martins, creative directors at Wieden+Kennedy São Paulo, said: “A beer developed for athletes. It seems like a contradiction at first. But, when we think about it a little, we remember that 99% of athletes are people like us, who have a career, a social life, a family, and juggle all that with a training regimen. These “Non-official Athletes” don’t make a living from sports, but they do live for sports. And though their names may not make the news, they also should be celebrated.” For the launch, Skol invited skateboarder Bob Burnquist and surfers Carlos Burle and Maya Gabeira to contribute with their perspectives as official athletes. Perspectives that, in spite of the busy training routines and competitions, still value balance, health and a tranquil mind. These athletes will contribute to Skol Ultra projects in partnership with the brand.

“Take Off” is the latest piece of creative work from Delta Air Lines and Wieden+Kennedy New York. The first spot in the campaign (above) is directed by Adam Berg and Joost Van Gelder, with the second to launch in early 2016.  “Take Off” was shot entirely in one take from the perspective of a departing plane, heading to new adventures, experiences and opportunities. Donald Sutherland continues his role as the voice of the brand.

Wieden+Kennedy Tokyo launched their own TYPE eyewear brand back in 2014, with the range of spectacles inspired inspired by and named after different typefaces. Over the last 20 months, the agency and a Japanese online retailer, Oh My Glasses, have released eyewear inspired by fonts ranging from Futura to Times New Roman, and this month, the Eurostile, Friz Quadrata, Optima and Serif Gothic have been added to the TYPE lineup. The concept behind the glasses, is that as the choice of typeface affects expression in written communication, subtle design differences in eyeglasses frames change the impression of the person who wears them.   So TYPE was inspired by the similarities between the function and design of typefaces and glasses. Each pair is handcrafted in Sabae city, known as the home of Japanese eyewear craftsmanship.

The Eurostile, Friz Quadrata, Optima and Serif Gothic have been added to W+K Tokyo's TYPE lineup of eyeglasses inspired by typefaces

Eurostile was created in Italy, with Wieden+Kennedy Tokyo reflecting the typeface’s curved square shape and creating glasses that give a warm and friendly impression.   Friz Quadrata is used widely in universities and government entities. Its sharp and edgy design is recommended for those who like to have strong dramatic eyes. It is said that the typeface Optima was created in the 1950’s, inspired by the epigraph at the Basilica di Santa Croce in Italy.   Wieden+Kennedy Tokyo examined its modern yet classic features to create the sophisticated round shape glasses. Serif Gothic combines both round and straight-line sharpness. Serif Gothic frames are recommended for those who are looking for a simple, yet unique, style.   TYPE glasses are currently available only in Japan and international shipping is currently unavailable.   Needless to say, we're devastated.

The entire history of the internet told in one print ad

Finally, Wieden+Kennedy effectively told the entire history of the internet in a single print ad this month as part of a campaign celebrating how “The internet can't be stopped” that marks the call for entries of this year's Webby Awards, which celebrates its 20 anniversary this year. A new work has bee be featured on the Webby Awards website every week since the start of September, with NASA's Jet Propulsion Laboratory, Big Spaceship, Code & Theory, Google, Facebook, National Geographic and Pitchfork among the companies participating. The awards will take place next Spring in New York. 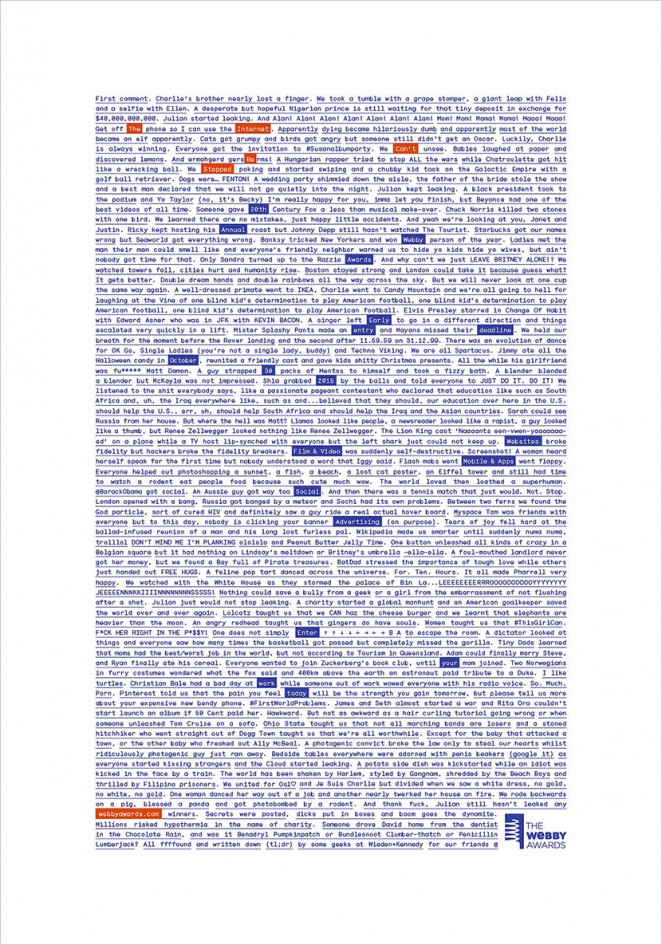