Agency of the Week: Saatchi & Saatchi

Visa has a proud heritage with the Olympic Games, having been the exclusive payment services sponsor and only card accepted at the Games since 1986. With only five months until the Rio 2016 Olympic Games, Visa Europe has launched their “Heart of the Olympian” campaign from Saatchi London, which has been designed to drive awareness of Visa’s sponsorship and generate excitement ahead of the greatest sporting event on earth. The film, directed by Juan Cabral, follows an athlete preparing to compete and depicts the journey he goes through in the build up to the ultimate moment; the competition. His everyday life is interspersed with images of a beating heart, drawing parallels between the heart of an athlete and Visa. Visa is the beating heart of payments. Just like your heart, Visa is always ready, always performing, whenever you need it. From today, Visa will be promoting their sponsorship with the campaign, alongside a collection of promotions and activations that take Visa customers to the heart of the Games of the XXXI Olympiad. A 90 second version of the film will be shown in participating cinemas in the UK. Versions will also run across a range of channels including Facebook, Twitter, YouTube, created especially for the campaign.

“Just like the Olympians that will compete in the Games this summer, Visa is always on and ready to perform. This film is a celebration of that synergy” Gary Twelvetree, Executive Director, Brand & Central Marketing at Visa Europe

It's A No Brainer

The Kevin Bacon EE ads have been very much a “Love it or hate it” fixture on UK TV screens for a while now, but this latest spot turns the campaign on its head a little with something a little bit more creative. Here, Bacon hosts a spoof quiz show called “It's A No Brainer,” in a new campaign for the mobile network formerly known as Orange that features guest appearances from game-show stalwarts Rachel Riley and Stephen Fry. Saatchi & Saatchi created two ads for the campaign, the first of which features Bacon pressuring Countdown’s resident mathematician Riley to find an equation explaining why anyone would want to use a slower mobile network. Bacon also pops up as an audience member in the ad, because if you've got Kevin Bacon on your pay-roll you might as well make the most of him! 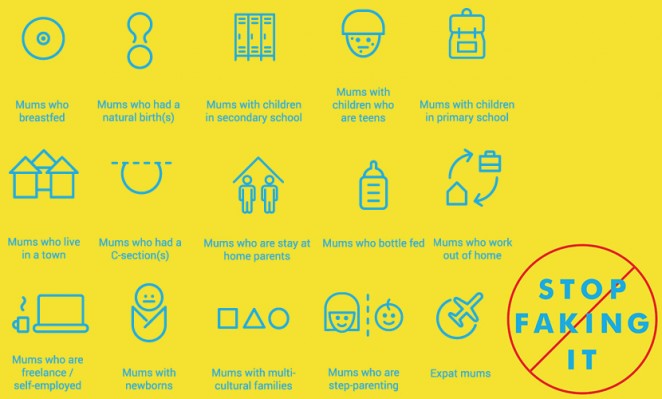 Mothers are notoriously underserved by adland, so in order to combat this, brands seeking to better connect with mothers have been issued with new guidance compiled by Saatchi & Saatchi and Mumsnet, one of the UK's largest parenting websites, in an effort to simplify this often misunderstood demographic. The Stop Faking It research identified at least 66 groups within which mothers define themselves, with the authors noting that the average British mother identifies with at least six of these, and sometimes more. The four most important of these however were lone parents (2.3 million); mothers of children with special needs (1.4 million); mothers of teenagers (6 million) and self-employed mothers (1.7 million). It was also found that these identities influenced the relationships women had with brands and their decision making processes meaning marketers must ditch simplistic assumptions and generic solutions when attempting to reach out. Armed with this knowledge, brands are being urged to rethink their approaches, for instance by changing packaging and promotions for single child families, who dislike wasting money on multipack promotions designed for larger families. It's a fascinating insight into a market that tends to get overlooked more often than not, and proves that Saatchi isn't afraid to step out ahead of the pack.

“We know from the Mumsnet forums just how strongly felt many of these identities are, and how comforted and supported mothers feel when crucial facets of their mothering experience are acknowledged” Mumsnet CEO Justine Roberts

How Do You See Me?

Olivia Wilde, the actress known for her roles in House, Tron Legacy and most recently the HBO series Vinyl, fronts a campaign for the Italian charity CoorDown marking World Down Syndrome Day (21 March). Saatchi & Saatchi New York has been working with CoorDown, a national organisation for people with Down’s syndrome on on ad which shows Wilde living an active, healthy life, as Anna Rose Rubright, a university student with Down’s syndrome, narrates, explaining how she views herself. The idea is that Wilde represents Rubright’s self-image and, at the end of the spot, the camera reverses out of a mirror shot to show Rubright herself (dressed the same as Wilde) as she asks: “How do you see me?” It's a powerful spot that uses the actresses star power in a subtle manner that doesn't detract from the message.

Saatchi & Saatchi recently teamed up with the 76 production company to create the launch film for the new C-HR Coupé, described as Toyota’s most important new car for the last 10 years. The collaboration didn’t stop there, with David Mould and Yann Secouet teaming up to direct together for the first time. For the directing duo, it was a fantastic opportunity to showcase their different styles and fuse them together to create something as diverse as the car itself. The film erupts with energy, each distinctive lighting feature or visual effect blending together with the surrounding lifestyle scenes. At the film’s core is the C-HR’s drive that spears through the visual fireworks.

“It was a very challenging brief that needed a bespoke approach to the production. It also helps that these two directors are great friends and very comfortable working together” 76 EP Mark Murrell