All concepts which most of us could have reasonably hoped we would never experience. And yet here we are entering another week of Zoom calls, home schooling, and … is it too early to have a glass of wine yet?

Yet it’s not the first time humanity has been here. In the early part of the 20th century so called Spanish flu was just one of a number of epidemics which swept across the world, devastating populations and requiring people to keep their distance.

Then, as now, brands often struggled to make sense of their place in a world turned upside down. Some navigated the unfamiliar territory with more success than others. 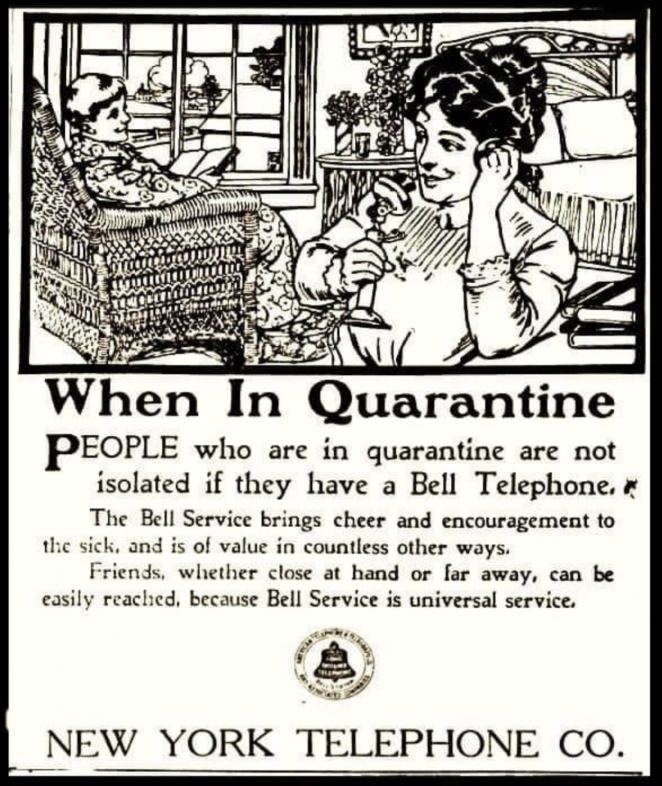 Making great advertising is tough at the best of times, when most people are well and the economy is on an even keel.

So what happens to creativity during a time of crisis?

This short article is a digest of work I’ve noticed since the Covid 19 crisis broke. The good and the bad; the brilliant and the maybe shouldn’t have bothered.

It’s by no means exhaustive, but there are lessons here I hope for everyone in the world of creativity, advertising and branding who’s wondering what the hell this all means.

Some of the best work has, of course, been the simplest. We’re gobbling up news with unprecedented rapacity at the moment and the New York Times has been able to communicate the simple truths of this new era with startling clarity.

This article on social distancing, written just a few weeks ago, when the concept was all new, breaks up the paper’s traditional page high fields of type to brilliant effect. 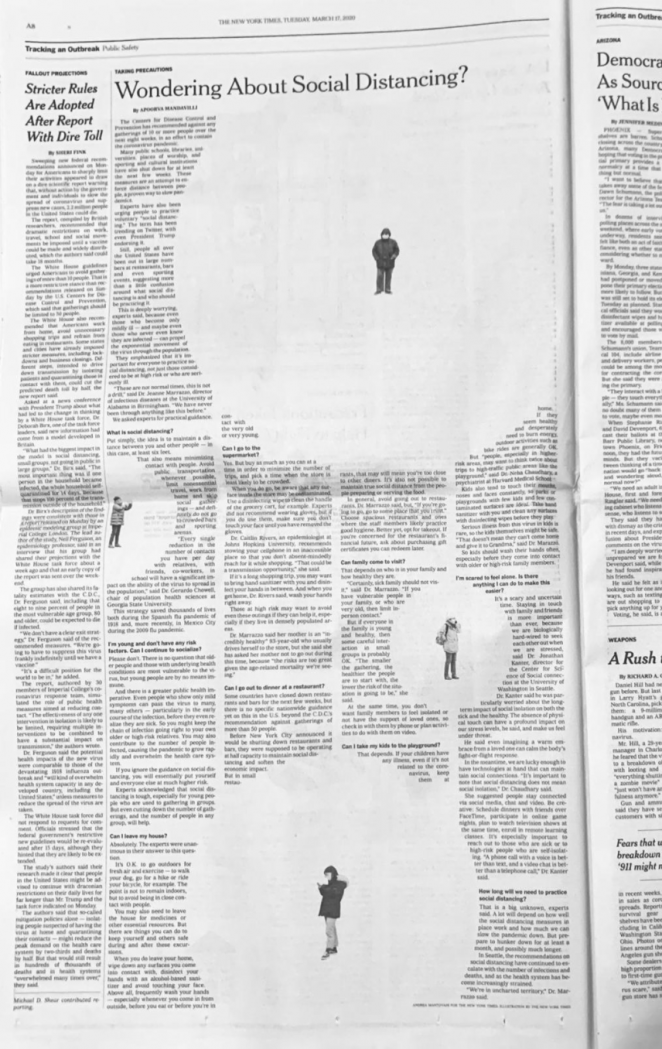 And the front cover below makes brilliant use of the distinctive elongated format of the newspaper, with a graph which shows the staggering spike in US unemployment claims since the crisis began. 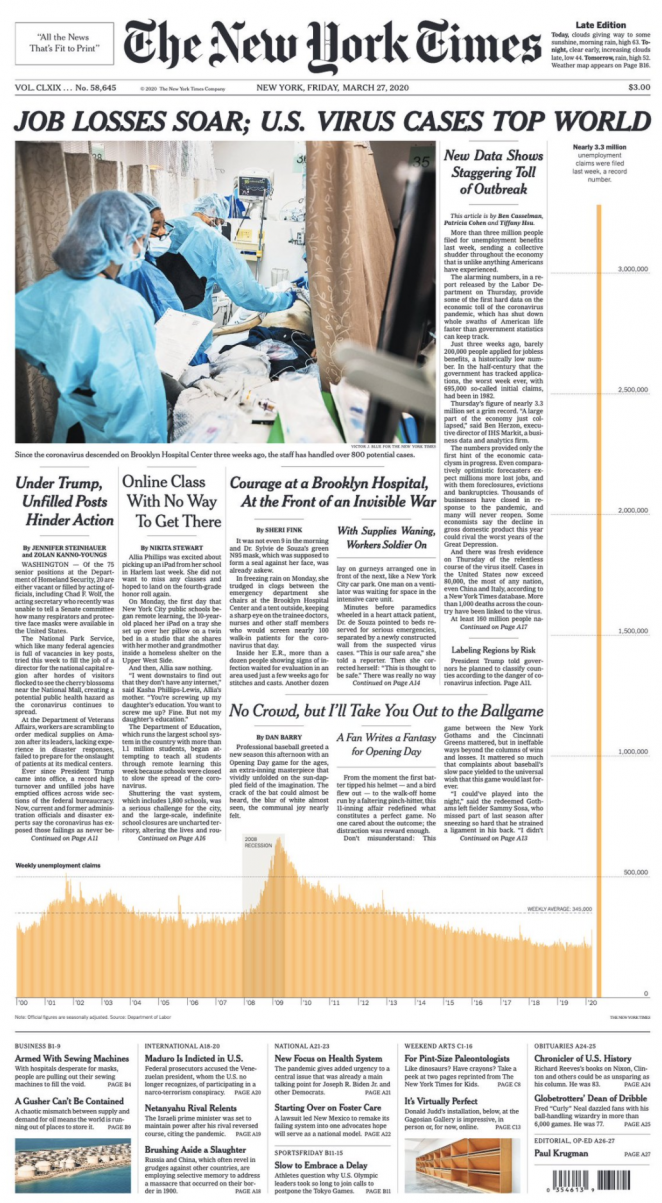 Although it wasn’t created by Guinness or their agency, this ad below, which underscores the need to stay home with a pleasing economy, was quickly endorsed by the brand. 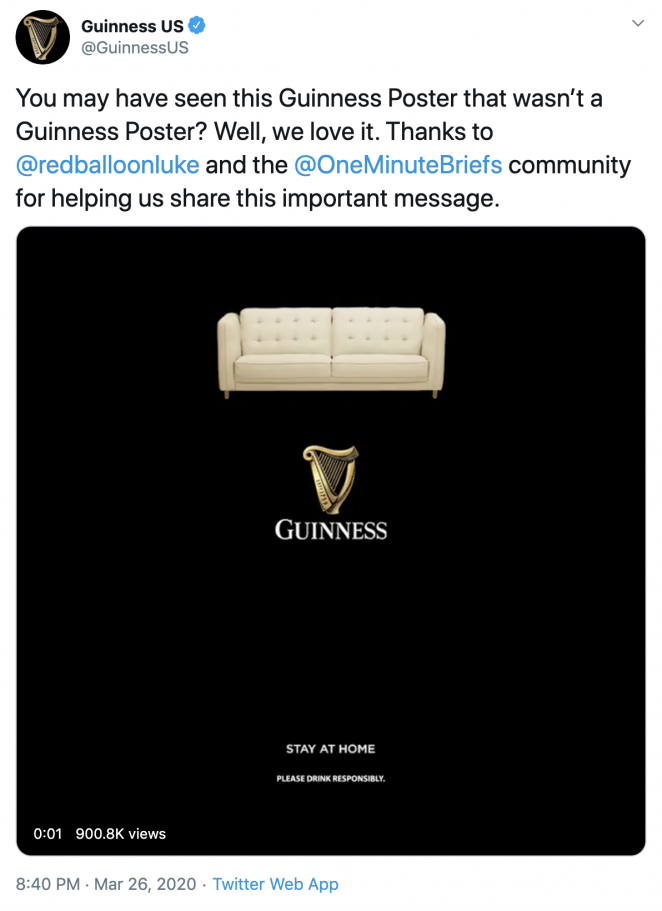 Another great piece of creative work generated speculatively was the campaign #staythefuckhome which was ostensibly by Netflix but in fact came from a couple of students at the Miami ad school in Hamburg. The mechanic is devastatingly simple: keep people at home by putting spoilers for their favourite Netflix shows at busy transport

We’re watching more TV now because, well, what else are we going to do? And some of the best judged work of the past few weeks has come from broadcasters.

The BBC was quick off the mark with a campaign repurposing scenes from comedy classics to underscore the message that we should all be staying home. There were clips from Miranda, the Mighty Boosh, I’m Alan Partridge and The Thick of It. Shooting new campaigns is going to be out of the question for the next few weeks so expect more campaigns based on innovative uses of existing material.

Also from the UK was the spot below from ITV, which encourages people to stay connected while being apart – a potent blend of authentic moments from celebrities and civilians delivered direct from laptops and camera phones. Had it come from another brand the spot might have felt a little, well, opportunistic, but ITV’s ongoing mental health campaign Britain Get Talking gives it credibility and weight.

Which brings me to the question of brand purpose.

An issue never more salient than it is today.

Some of the most hollow creative executions have come from brands who appear to be treating the crisis simply as an advertising brief, rather than an opportunity to use their commercial power to make a meaningful difference to people’s lives.

McDonald’s reworking the iconic golden arches so that they have a space between them left a rather bad taste in the mouth when it was revealed the company was only offering five days sick leave to its half a million workers. 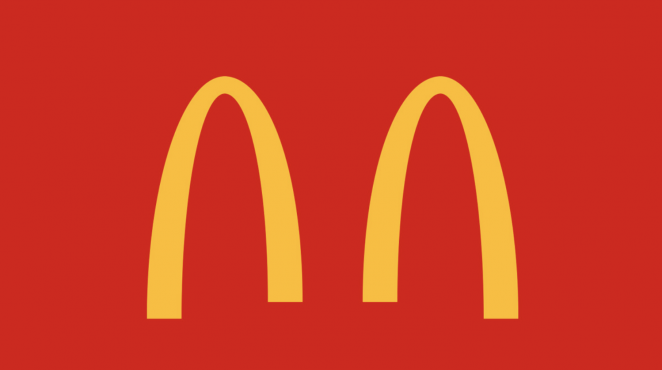 Much better was a French ad from rivals Burger King which shows you how to simply construct your own whopper from shop bought materials. It’s fun, playful, timely and isn’t about selling more BK burgers. Though it may well do so in the long term. 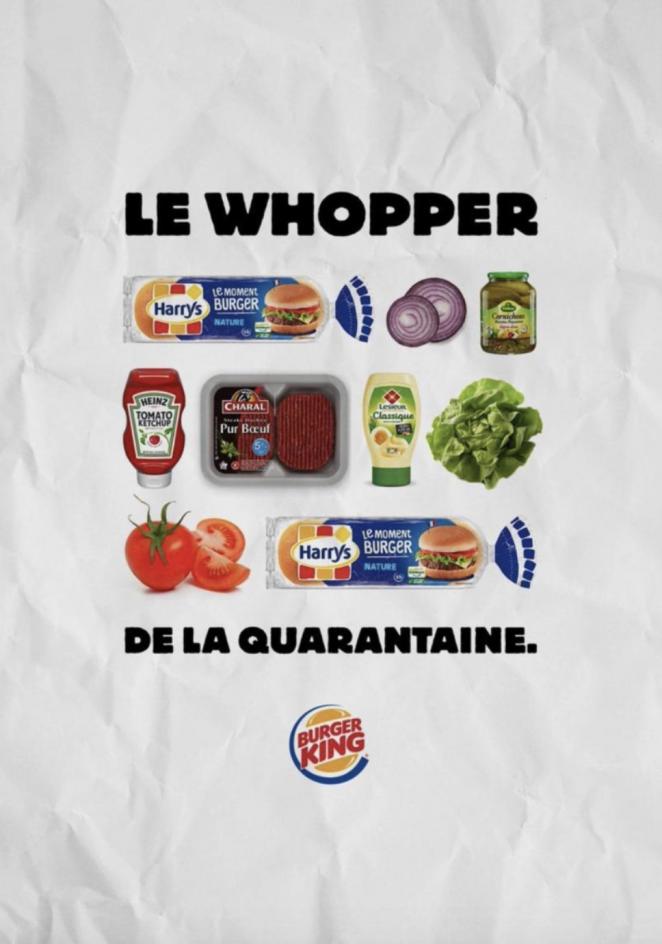 By the way, the whole logo spacing thing has become something of a me-too bandwagon, with Audi, VW, Mercedes Coke and a whole load of others jumping on board. Corona washing? 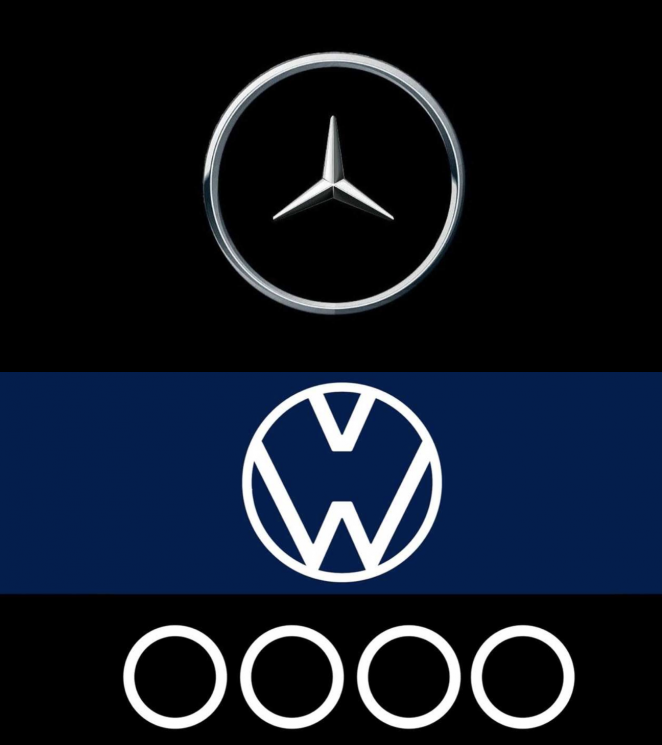 Consumers are quick to see through hollow gestures and the banana company Chiquita provoked this response on Twitter when they removed ‘Miss Chiquita’ from their logo. 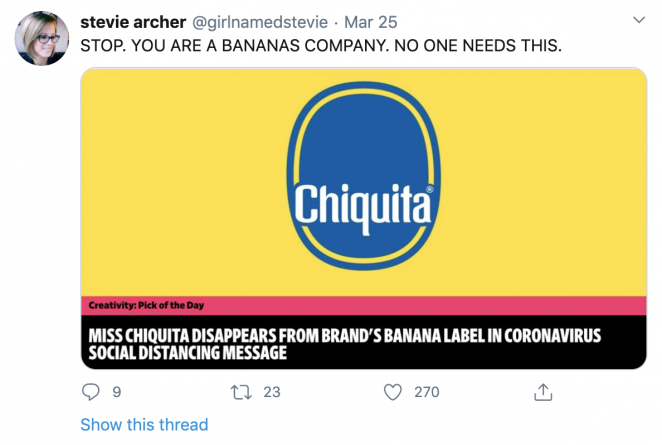 Even during a pandemic the golden rule of brand purpose still applies – unless you have a credible, demonstrable and longstanding commitment to the purpose you’re endorsing, which stretches way beyond an ad campaign and actually costs you money, don’t even go there.

Much more convincing was this simple commitment from Land Rover to offer 160 vehicles to support emergency organizations during the coronavirus.

And brand purpose doesn’t need to be high faluting, or even necessarily lifesaving. It just needs to feel true. This simple spot from Dick’s Sporting Goods builds on the joint truths that we need to stay healthy during lockdown and most of us are just a little bit bored …

As always, actions speak louder than words. And Telia Finland, a media company, are giving away all their advertising space to small businesses during the crisis. 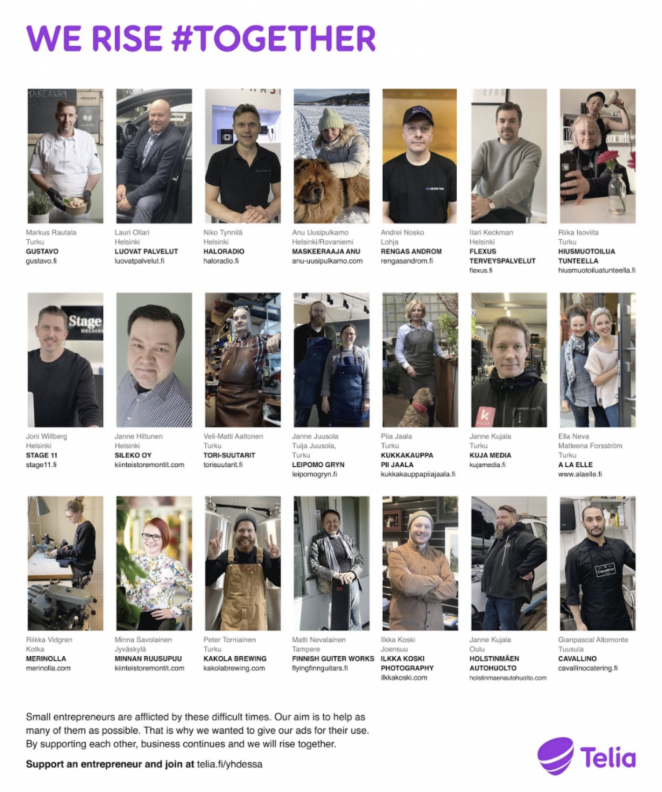 Beyond the world of advertising and branding there has been some brilliant Corona inspired creativity too.

Knowing that we touch our phone screens on average 2617 times a day designers Renato Tata and Stefania Esposito have created this series of screensavers to highlight the issue and gently remind you to ... you know what. 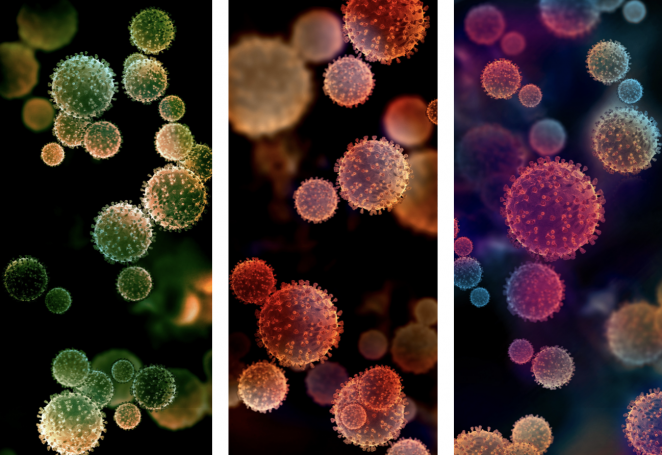 In Holland flowers sellers are feeling the pinch as people become less comfortable with receiving foreign objects into their homes, so the Flower Council of Holland put some of those unsold flowers to use with this colourfully optimistic message …

And designers all over the world have been posting messages of inspiration, guidance and support under the banner #HelpByDesign. 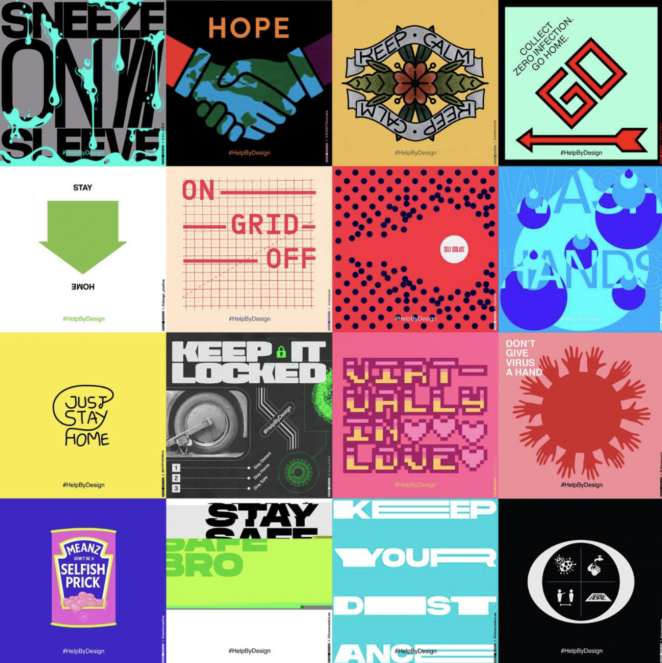 So there we are.

A highly selective round up of work created since the crisis began.

Some campaigns have hit the bullseye, while more have fallen wide of the mark.

If you’re a brand thinking of how best to communicate during these turbulent times my advice is … don’t.

First, look after your employees.

Then ask yourself whether through your workforce or infrastructure you can make a meaningful contribution to public health or supporting vital services.

And, if you’re still feeling the urge to say something, only do so if you can say with confidence that your message is going to make our lockdown lives a little better.

Join me for a series of free webinars during lockdown on all aspects of the creative process here. Next up I'll be asking What the F**k is a Brand (and why should I care)?