Even in the core of his professional life (the peak of Madison Avenue, around the Sixties), Rolls-Royce was already a premium car brand, one that was able to establish itself in the early Twentieth Century as one of the pioneers of lifestyle and luxury. To the legend of advertising, Rolls-Royce had somewhat of a unique appeal.

All those who have read anything about David Ogilvy (and you have, if you’ve been in this industry for long enough) will know that there was no getting past his convictions. If he wished to take on an account, there was very little anyone could do – including his partners at Ogilvy itself. This is pretty much what happened with the Rolls-Royce account.

The brand had been marketing its cars as “the best cars in the world” for decades, and in 1958, they were clearly in need of some help to relaunch their line-up, having to compete with the likes of Ford and others. The trouble was that Rolls-Royce did not have a huge amount of money; but this surely couldn’t be enough to stop Ogilvy, could it?

Entire decades on, the Rolls-Royce ad is still regarded as one of the best ads of all time, if not the best ad ever. Its direct-response copywriting approach made history in an era where brands were barely asking customers to do anything – let alone book a test drive there and on the spot for one of the most expensive cars in the world.

You can’t be a father of advertising without being a master of your own craft. David Ogilvy was a master copywriter, able to speak to an audience in unique ways, ways that still get taught today in advertising classes. And he poured all of that into the Rolls-Royce ad in 1958. 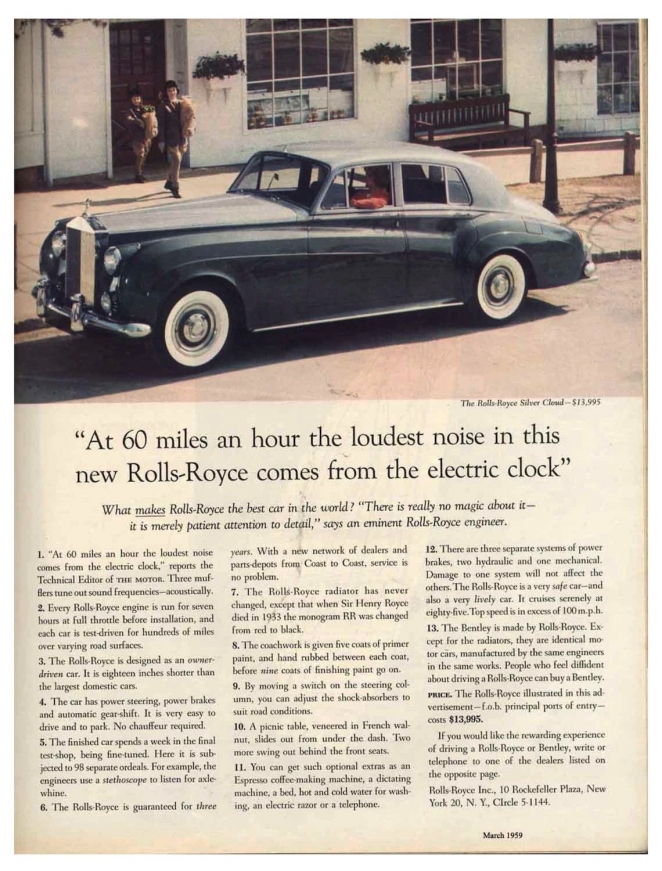 One of the most famous stories surrounding this ad is the one concerning pre-production research times: Ogilvy notably spent three weeks researching the new Rolls-Royce Silver car, reading up on everything that could be relevant to the case. Technical documents, articles, magazine – anything and everything could be useful to properly sell that masterpiece of mechanical engineering.

Ogilvy went as far as to speak with engineers in Rolls-Royce factories, learning everything about the car itself and looking for that unique selling proposition which would make a real difference. In the end, he settled for a rather unique differentiator. Every luxury car brand claims to have the quickest, classiest and most comfortable cars; but how many claim to have the most silent?

As he read The Motor magazine, one quote from the Technical Editor struck in particular: “At 60 miles an hour the loudest noise in this New Rolls-Royce comes from the electric clock.” Ogilvy knew that the Rolls-Royce audience was firmly in the upper class, a segment mostly interested with peace, quiet and a sense of peaceful escape from the rest of the world. Quietness and silence were the main differentiators. Ogilvy spoke the language of the audience. For that, he was highly rewarded. 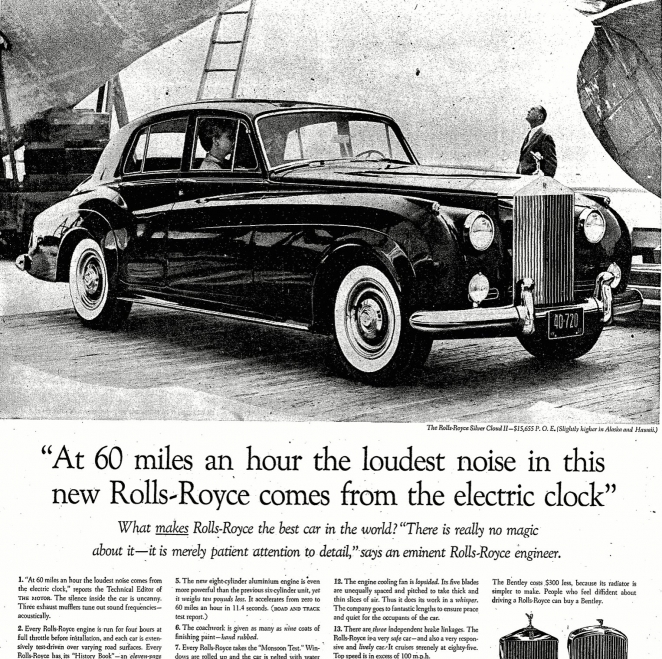 Ogilvy wasn’t a fancy English professor with a picky eye for grammar rules (not that there’s anything wrong with that – I’m a lover of grammar myself). He notoriously claimed to ignore “the rules of grammar. If you’re trying to persuade people to do something, or buy something, it seems to me you should use their language.” That is exactly what he did in the famous Rolls-Royce ad.

After winning the account, Ogilvy didn’t have much to work with. In fact, Rolls-Royce had only $25,000 in budget – nothing compared to the major ad spend of competitors such as Ford itself. With that budget, Ogilvy was only able to purchase four spaces in two publications – that’s as far as he could go. As a result, the ads had to be spotless, perfect, unique. They had to catch attention like few other things in those publications.

Ogilvy knew that on average, five times as many people read the headline as they read the body copy. He spent days working on headlines, writing over 100 and cutting them down to a shortlist of about 26. He then showed all of them to his team of other writers at Ogilvy, Benson & Mather and asked them to choose the headline they preferred. Everyone agreed on the one that made it to print.

The headline itself was rather unique. It was a bold choice, a huge risk, with no benefits stated clearly other than a lingering, blissful sense of peace and quiet at high speeds. Even years after writing this headline and the supporting body copy, Ogilvy still regarded this ad as his masterpiece and the best headline he’d ever written. 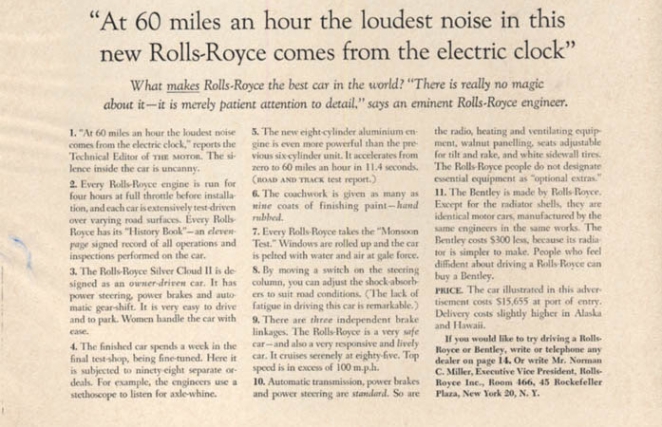 The ad was structured in bullet points, listing thirteen unique features of the Rolls-Royce Silver car – such as the extensive testing, the human care behind the manufacturing process and more.

It featured a simple and clear call-to-action – again, in an era when brands barely asked prospective customers to do anything. A typical car ad would redirect customers to a car dealership or to a salesman – but not Ogilvy’s. The Rolls-Royce ad invited customers to book a test drive directly by phoning one of the dealers on “the opposite page”, which featured nothing but names and numbers to contact.

With this approach, Ogilvy bypassed the stages that would see a customer speak to a salesman before making a choice. He listed the benefits of the car and sold it there, on the spot, through the ad, inviting car buyers to take immediate, tangible action. 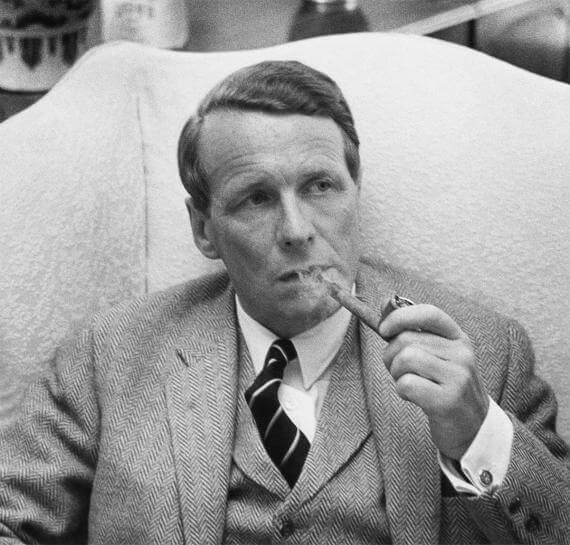 The ad went to print in March 1959, resulting in a gigantic boom of interest for Rolls-Royce and a stellar win for Ogilvy’s work. To date, it is regarded as one of the best ads of all time in terms of copy, headline and general approach.

Sure, as predicted by his partners, the Rolls-Royce account didn’t bring them much money after all, and the partnership was terminated pretty quickly when Ogilvy discovered a number of faulty cars being sold across the US. It wasn’t a long or fruitful partnership at all. But I believe that, years later, that didn’t matter too much; the Rolls-Royce ad had made history. It is still making it today, as more and more people learn about it, even as you finish reading this piece.

This legacy is worth more than all the advertising gold on this planet.

Will Awdry September 24th, in the morning

A wonderful, thorough and illuminating read, Antonino. Thank you. It makes clear just how brilliant an adman he was and why his reputation is entirely justified. In far more knockabout fashion, the same ad led to a curious exchange many years later: https://willawdry.blog/2020/09/03/silence-and-fury/

Thank you Will! Interesting story you got there. I'm sure he must have gotten over his anger at some point ;) hopefully he did see it as a tribute in the end.

The "cult of Ogilvy" at O&M you described in your piece kinda reminded me of another big corporation, albeit in the entertainment field... Same obsession for quotes across the company, same questionable interpretations from management. The world truly is an interesting place.