It was 18th January, 1970, when The New York Times ran a full-page ad to announce “A national day of environmental education.”

Interestingly, that day would be several months down the line: April 22. Earth Day.

That’s right – Earth Day, which rallies up millions of people worldwide to take environmental action and raise awareness of the climate crisis this week, was first announced publicly in a New York Times ad. The ad featured some of the most incredibly persuasive and compelling copy in the history of advertising, and it set the stage for a global movement of environmental actions, initiatives and activism.

No one can tell the story of Earth Day better than the organisation who gave it life. This is what EarthDay.org says about the very first Earth Day back in 1970:

“Senator Gaylord Nelson, the junior senator from Wisconsin, had long been concerned about the deteriorating environment in the United States. Then in January 1969, he and many others witnessed the ravages of a massive oil spill in Santa Barbara, California.”

That tragic environmental disaster was the culmination of years of dreadful pollution and careless industrial action. Inspired by anti-war movements, Senator Nelson decided to leverage a rising consciousness in the general public about air and water pollution, and soon built a national staff of 85 trusted people to promote events across the United States.

Thousands of colleges and universities joined Senator Nelson in protest to advocate for the health of the planet. But really, the incredibly small non-for-profit organisation that ran the first Earth Day was running on peanuts and miracles. They needed something of impact. And so, they turned to the New York Times. 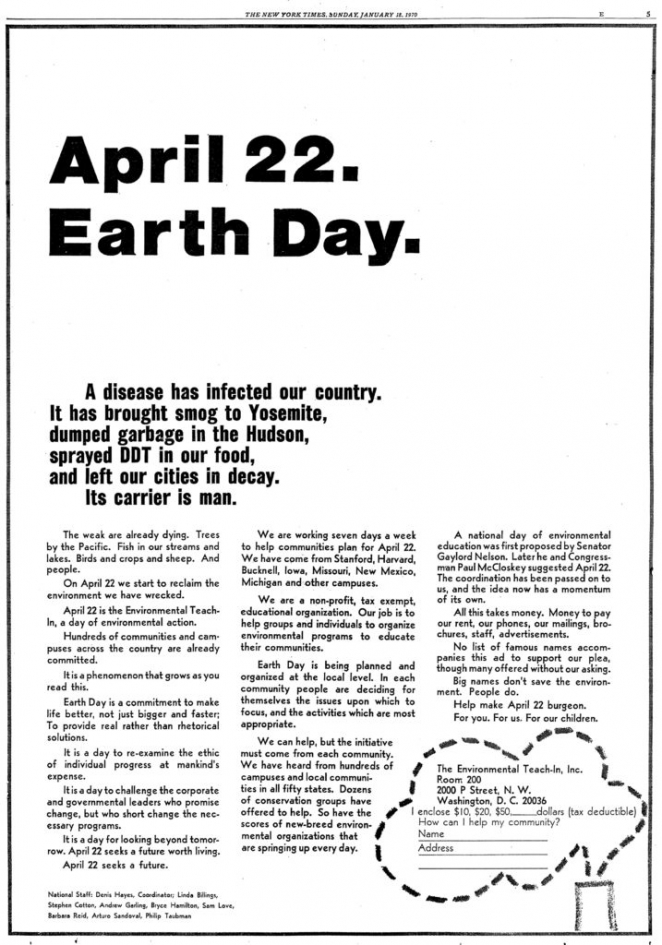 The original 1970 ad that ran in The New York Times.

The ad itself was nothing complex. In fact, it was the simplest ad ever, with nothing more than type on the entire page, and a very cute drawing of a waste factory cloud to frame a small tear-away section in the bottom right. It didn’t even have a classic call-to-action.

”April 22. Earth Day.” A big headline dominating the page, with a subheading appealing to the emotions of the reader to advocate for the future of the planet. “A disease has infected our country,” the ad said. “It has brought smog to Yosemite, dumped garbage in the Hudson, sprayed DDT in our food, and left our cities in decay. Its carrier is man.”

The ad then went on to describe what Earth Day was, the purpose of the organisation planning it, and the challenges they faced to help bring it to life. The Environmental Teach-In, Inc., stationed in Washington DC, had but one simple request: donations from anyone interested in the cause, to help pay rents, phones, mailings, brochures, staff and advertisements.

“No list of famous names accompanies this ad to support our plea,” the ad concluded. “Big names don’t save the environment. People do.”

That may have changed over the years. Influencers from all over the world now rally up to support Earth Day every year, big and small names, all trying to make a difference and encourage environmental action to save the planet from a descending spiral of doom. But the essence of Earth Day has remained unscathed; people coming together to fight a manmade crisis, to get rid of the ‘man-carried disease’ described in that 1970 ad.

And the ad was a huge success, it turns out. According to Denis Hayes, coordinator of the first Earth Day, it brought in enough revenue to pay for itself a couple times over.

All with a few hundred words, some typographical magic, and the little drawing of a smoking chimney in the bottom right corner.

The first Earth Day led to a number of environmental legislations to help protect the environment in the US: the Clean Water Act, the Endangered Species Act, the Federal Insecticide, Fungicide, and Rodenticide Act and even the foundation of the Environmental Protection Agency. It inspired 20 million Americans to occupy parks, theatres and streets to protest against the careless industrial practices that were poisoning the planet at the time.

It took Earth Day a few decades to go global. Denis Hayes was approached in 1990 by a group of environmental activists who were interested in expanding the reach of Earth Day to the entire world, and so they did. But today, that impact is beyond scale. Every year Earth Day is one of the most popular, important and observed occurrences in the entire world, with personalities raising awareness all over the Internet and on social media to inspire climate action.

It is a time for reflection on the beauty of the planet and everything that we risk losing if we keep acting recklessly and disrespect Earth’s fragility. And with more consumers being environmentally aware than ever before, it’s clear that Earth Day is finally having the resonance it always wanted.

And it all started with a full-page ad, paid by a rising nonprofit, in one rather historical issue of The New York Times.