Accentuate the negative - The campaigns that leant into bad press | #HistoryMonth

Advertising is, more often than not, about showing off our best sides and leaning into what makes us great. But what if that’s not enough to set you apart from the pack? Self-deprecating humour has been a pretty common concept in comedy but when it’s used in an advertising campaign it can be seen as something of a risky move.

Go too far and you risk doing severe damage to your brand and your reputation but if you don’t go far enough then what’s the point in the first place? To celebrate the brands and agencies that have championed the idea of leaning into the negative, I’ve decided to focus on the three that have done it the most effectively in (relatively) recent history.

This one was so successful it actually managed to enter the cultural zeitgeist and it’s remained firmly lodged there ever since. The concept was initially dreamt up in the mid 90s as a subtle bit of sly, self-effacing humour but nearly 30 years later and people in the UK still invariably refer to situations where you either love something or detest it as a “Marmite thing.”

The initial tagline was the brainchild of Richard Flintham and Andy McLeod, and was created in 1996 when they were a young creative team at BMP DDB (now adam&eveDDB). It grew out of the simple recognition that while Flintham loved the spread, McLeod hated it.

“There wasn’t a brief specifically to come up with a new slogan,” remembers McLeod. “We certainly didn’t set out to think of one, and in any case I’d say it’s more of a statement of fact than a slogan. All we did was think about what Marmite meant to us. What was the truth of the product. It seemed obvious to us that Marmite polarised opinion like nothing else, we just thought that was something worth talking about in advertising.” 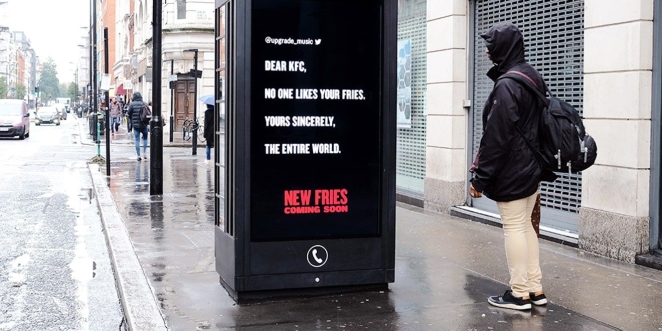 Nobody has ever been to KFC and congratulated them on their french fry game. Or at least that was always traditionally the case. Back in 2018, however, KFC responded to a rather abrupt Tweet which stated: “Dear KFC, nobody likes your fries” not by responding with an insult but by actually changing the recipe of their fries.

They even generated an advertising campaign based around their new fries and while they are still not exactly Burger King level, I have to admit they are now semi-decent. At least when pared with a nice tub of gravy, of course.

While this one might not have had quite the same cultural impact as I Hate Marmite, it’s certainly just as strong a basic concept. The idea behind the creative (another from adam&eve DDB) was that the Volkswagen Golf cost more than its competitors and rather than shy away from that fact, they leaned into it and leaned in hard.

The tagline “you get what you pay for” is underlined by a man purchasing a parachute before doing a skydive. The one he chooses is a wonky looking number from the bargain bin rather than the more expensive premium parachute offered by the store clerk. You can probably fill in the rest of the blanks yourself.

What the campaign achieved for Volkswagen was positioning themselves as a more high-end automotive manufacturer than the likes of Peugeot and Vauxhall, bringing them more in line with the BMWs and Mercedes of the car world.