Nicolas ‘Nico’ Perez is an ambitious, ‘ideas-first’ bilingual Creative Director and Copywriter from Chile with 10 years of experience working in different countries and creating integrated campaigns for major brands like Coca-Cola, KFC and Uber, to name but a few.

He’s also a heavy metal-loving oddball based in the bustling capital Chilean city of Santiago, where he works for Wolf BCPP, an inspiring new(ish) independent shop that’s already created work for brands as diverse as National Geographic, Nike and Fox.

As part of our series peeking behind the curtain on some of the world’s most exciting new agencies, we spoke to Nico about what makes Wolf different. We touch on the dynamic nature of the team, the heavy focus on idea-sharing and how they were ahead of the video conferencing curve. And that’s just the beginning! 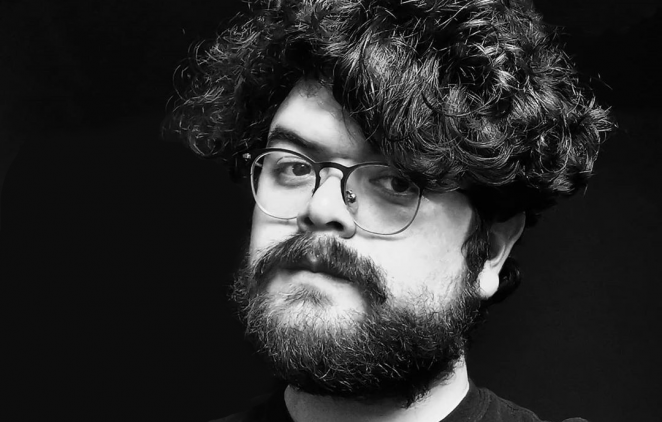 Wolf BCPP is an independent creative shop that’s almost five years old now. Wolf started when four of the top minds at Porta (previously LowePorta) decided to open their own business. In fact, BCPP is the acronym for the last name of the four founders of Wolf: Baeza, Carcavilla, Pérez and Perry.

I was lucky enough to work with them all during the LowePorta years, and it was a very inspiring and gratifying experience. So, when I returned to Chile after three years working in Colombia, it was a pretty obvious move to contact them again and see what would happen.

The agency is in the top 5 best creative agencies in Chile according to ACHAP (Chilean Agencies Association) and we do work for international and global companies, so it’s a great place to be.

The process does not differ so much from any other places that I worked before. As a Creative Director, I try to be as horizontal as I can be and the agency does the same as well. We have a meeting every Friday where all the creatives gather together to share proactive ideas for our different clients.

It is a valuable meeting for all of us because junior creatives get the chance to pitch ideas in front of all the creative department, which is a great exercise. It helps them to develop their presentation skills and also gives them the opportunity to end with a big idea for their portfolios, something that maybe in their day to day work wouldn’t happen so fast.

The process is the same for the senior creatives and even the CDs. The meeting is a constructive way to let them express all of their ideas. So sometimes, a small and maybe not that well-crafted idea presented by a junior creative becomes a big powerful idea thanks to the feedback and the rethinking process of the senior creatives. It’s like a family, all working together looking for the best possible ideas. 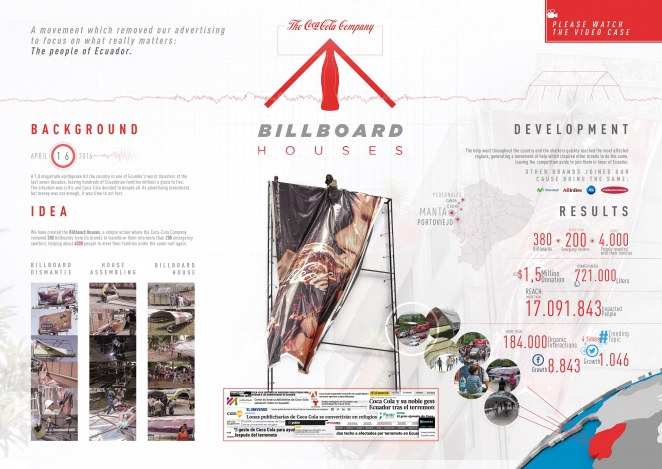 There is no doubt that the COVID19 crisis and the social distancing measures have accelerated the adoption of several technologies that now help us to do e-meetings and the adoption of the home office as a new normal way to do our work.

At least for me, all of these technologies weren’t something new, because when I worked at Findasense Colombia, in the regional digital team for Coca-Cola, we did a lot of home office work, having e-meetings with the different teams from the LATAM region. But for the Chilean market at large, this is big news as it’s a totally a new way to face work. I guess after the pandemic ends, we will continue using this technology in order to be more efficient.

In terms of ideas, sometimes technology is an excellent add-on for any idea, but only if it's justified of course. I’m an “ideas first” creative, so I try to avoid gimmicks and bringing new technologies to the table as a replacement for ideas. In my opinion, you must first build a great concept, something that could be reshaped in multiple ways on multiple media. Then,  you think of a technology that would work great with the idea and make it even bigger, not the other way around.

I don’t think there is a secret, maybe the biggest motivation for me and my team is to see the work done. When it comes to ideas, I’m pretty demanding with my team, not in a bad way, but I try to be picky with which ideas we will present to the client in order to get the best work possible.

As a Creative Director, my main mission is to sell ideas and make them happen. If I don’t do that, I’m failing. It’s like the meme “you had one job”, you can’t get back to the team and say “sorry guys, better luck next time!” In some cases, it's really hard to make them see the light and with other ideas, we insist, and insist, and insist, until we annoy the client and they decide to do what we recommend.

Burger Exchange (the campaign that allows you to swap the internet’s “hamburger button” for Whoppers) was presented almost 5 times until we produce it. I believe there’s no better way to inspire and motivate a team than to tell them that the idea they thought up and created will be a reality. 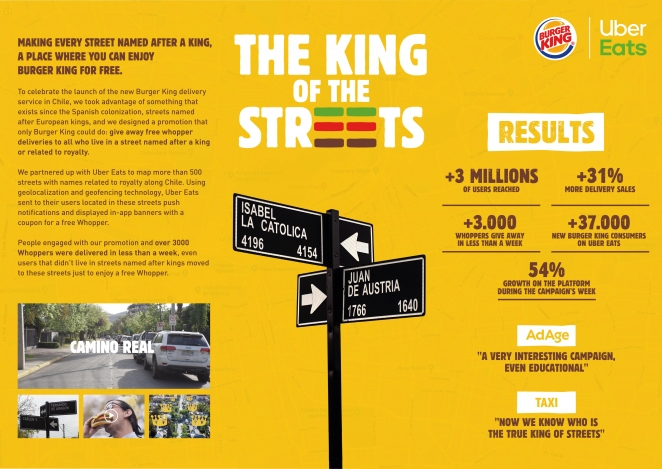 Seeing how some of my ideas have become part of the Chilean pop culture, listening to my uncle say me: “I'm glad you studied advertising and not engineering” and seeing the happiness in the face of my mom with every goal I accomplish. I’m also proud to have  moved abroad because of my work.

Mostly music. I’m a metalhead 24/7, I collect CD’s, vinyl and even tapes from the bands I love. Every week, I try to discover new music and add new things to my playlists. I have been to more than 666 concerts and since 2008 I use part of my vacations to attend some of the biggest metal festivals around the world. It’s a way of living!

And besides that, watching movies, stand up and series with my girlfriend Javiera, reading sci-fi books (Isaac Asimov, Frank Herbert and Orson Scott Card are among my favourites!), playing video games, travelling, learning stupid and interesting facts from the Internet, watching memes, and trying to absorb as much culture as I can.

Love what you do, if you don’t love advertising and creativity, dedicate to something else. This is about passion, about working your ass off until you came up with an idea that makes you feel something inside your gut.

Embrace frustration and try to understand that victories in advertising (and in life) are few compared to the times we fail and get a no as an answer. Consume as much culture as you can, ideas are just the mix of the things we read, watch and know.

Try harder than before and don’t give up, even in dark times like the ones we are living right now, and when you want to give up and resign, always remember that an idea can become a lifebuoy in a sea of hopelessness. 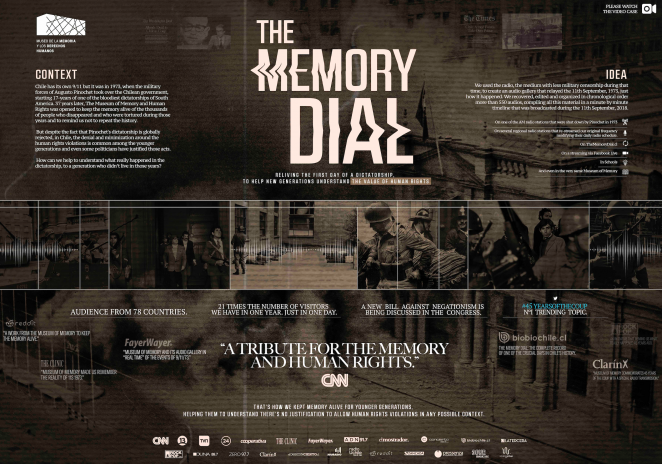 I would love to see more different disciplines working together to create groundbreaking and life-changing work, not just to help brands to sell more, but also to help people to have a better life, to create a better and fairer world.

Of course, this is not a job just for advertisers, creatives and designers, we need everyone involved in this task, and when I see creative projects with people from different disciplines like engineering, robotic, programming, artists, biotechnology, among others, involved in their realisation, it really gives me hope for a brighter future in terms of creativity.

Just think of the fact that when we started to involve informatics into the brand’s world, then the possibility to have e-commerces and online sales was a reality. Mixing different disciplines to work together within the creative industries will give us infinite possibilities.

I would love it if brands stopped asking us to do disposable content. Today, there’s a lot of social media content that implies a lot of working hours and resources that get wasted in publications that last just one day (or some few hours!) and sometimes without a proper media investment behind.

They are just organic posts that result in a few interactions but nothing else. At least for me, doing that is wasting resources, and many clients don’t get that. They believe if they have a social network account with publications every day, the work is done, and they are just doing useless content, it’s white noise in the shape of a post.

I’m a believer that less is more (this is true in many aspects of advertising, creativity and design), so having less social media publications but with better and stronger content. That is always my recommendation and one of the things that I would love to change in this industry. 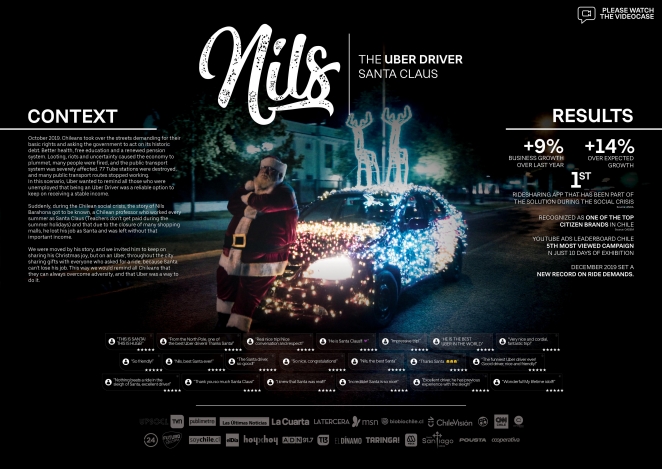