A saucy campaign 150 years in the making for Heinz | #BehindTheIdea

The latest saucy campaign for Heinz pokes fun at the brand for launching a new range of pasta sauces in the UK, 150 years after they first entered the market.

The campaign, devised by Wunderman Thompson Spain, launched with a full-page ad in The Guardian, apologising to the British public and Heinz’ founder, Henry Heinz, for not creating the pasta sauce they deserve – until now.

In the long form copy they explain how they’ve created “probably the best pasta sauce you’ve ever tasted”, promising consumers that it was worth the wait, “because nothing so ridiculously good, has come so ridiculously late.”

The campaign is the result of a partnership between Wunderman Thompson and Heinz, with the agency involved in the conceptualisation of the product range from the very beginning, from the packaging design to defining the entire launch strategy.

To dig a little deeper and go #BehindTheIdea on the campaign, we spoke to Paco Badia, ECD at Wunderman Thompson Spain.

The Heinz New Ventures team wanted to launch a Heinz Pasta Sauce in the UK based on the brand’s tomato expertise and its natural ingredients. A key point in the brief was to give the product and campaign proposal an angle that would stand out in a cluttered category.

The marketing team had some first rough ideas on naming and packaging design but they challenged us to rethink the entire proposal – a challenge we gladly accepted! It was our first experience working with this client and the process was very collaborative and natural. I think both parties were equally excited about the launch!

As a creative and strategic agency it was a pleasure to enter the project before the communication phase, helping to conceptualise and design the product itself. Some of the key ideas from this stage of the process inspired the creative idea. 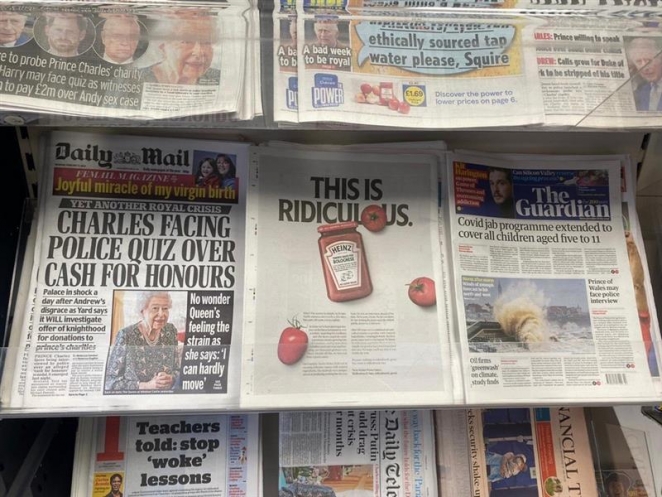 We started with the packaging. Our first decision was to keep it simple and give value to the product itself by focusing on Heinz’ tomato credentials to make it stand out in store. We did this by bringing the natural ingredients to the front label to prove the brand’s confidence in the product thanks to their unrivalled tomato expertise. Finally, we gave each variety of sauce its own colour to invite consumers to taste the whole range.

We wanted the campaign to be very straightforward and honest, avoiding unnecessary jargon and of course keeping Heinz’ witty tone of voice. We shared several creative routes with the client and together we placed our bets on the most brutally honest one. During the proess, we noticed in 150-years of history, the brand had never launched a specifc pasta sauce range before in the UK.

We found it funny that a brand that’s famous for its tomato-based products had never launched one of the most popular tomato-based sauces, a Bolognese. We put this truth at the center of the campaign’s storytelling and used it to build on the Heinz’ credentials on tomatoes. The result was Ridiculously late. Ridiculously good. A creative idea that delivers the message and engages the consumer by making the brand having a laugh at itself.

The campaign had a specific art direction based on the interaction of typographic titles, the ingredients list, and product photography. The

As we designed the packaging ourselves, we knew how we wanted to portray it in each execution, from POS to OOH. This drove us to create a unique visual code for the campaign that was easily transferrable to all the different formats.

We wanted to deliver a very honest message so wanted to remove any additional layers that would distract from this, as well as showcase the brand’s self-confidence and through the product and their ingredients, so used a minimal photographic set and natural lighting.

It was a big team effort between photographers, motion graphics studio, and a film director that specializes in food. The production was done in Spain and due to Covid, the client supervised it in realtime via video call. 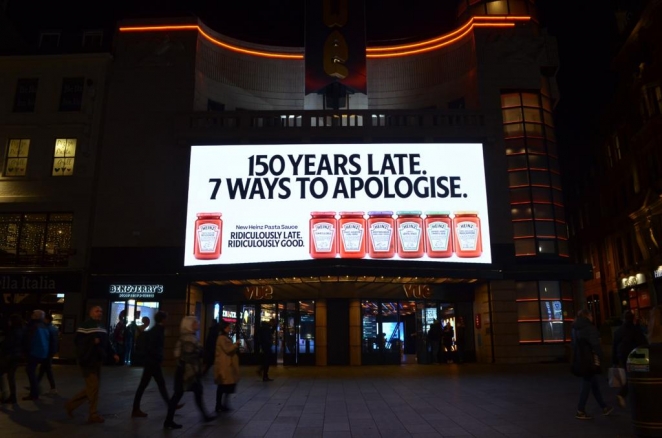 The main challenge was adapting the campaign to a very diverse media plan with a number of different digital formats and, as always, a limited budget. Each format had to be edited and post-produced individually.

All the animations were made using Adobe After Effects, paying attention to what specifically happens in each shot shot and making ad-hoc animations for each.

We used natural tomatoes for each shoot so in order to get some of the technical shots, Stasny, the director who worked on the TVC, had to use some fun tricks including a tomato gun to get the perfect squashing affect. 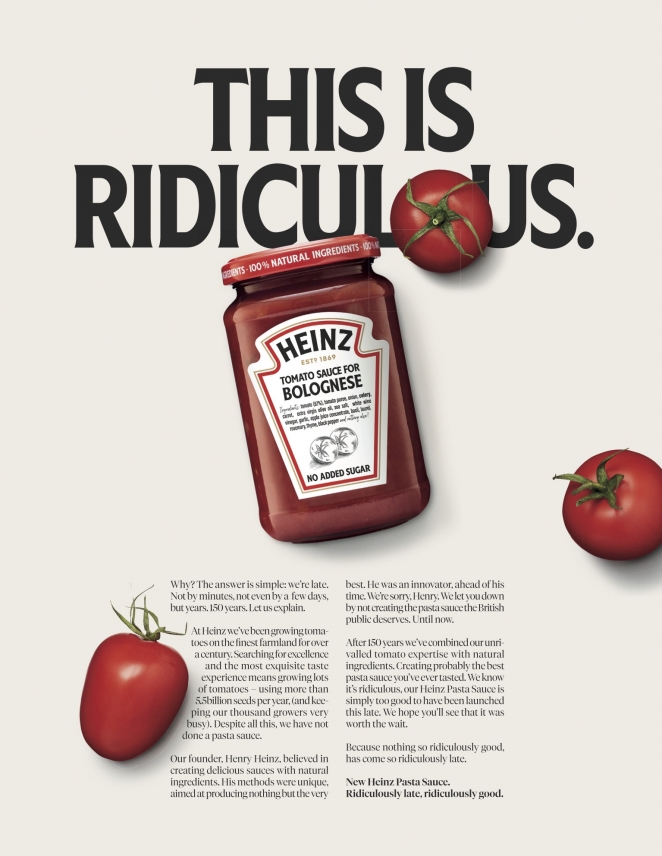 The main message of the campaign is that Heinz launched its first pasta sauce range Ridiculously late. But the quality of the product is so natural that makes the product Ridiculously Good. We knew irony was the best way to touch the hears of the brands’ fans and Heinz is one of the few brands who can laugh at themselves in this way.

The entire process from the product design to the final launch took almost two years, although the production phase was developed over the last four months.

We believe that the creative idea will help the brand to enter and differentiate in a very busy category.