To bring the campaign to life, O2 tapped into the increasing trend of throwback nostalgia, together with the help of Steps to pay homage to retro features of the phone. O2 surprised the public at The O2 arena with a flashmob style performance from Steps to demonstrate that the Galaxy Z Flip3 is the perfect mix of the noughties, with a 2022 upgrade.

To gain a little background and insight into the campaign and why retro was always going to be the right choice, we caught up with a trio of creatives from VCCP who helped spearhead the campaign. We go Behind the Idea with Head of Social and Influence, Nicky Palamarczuk, Planning Director Rob Estreitinho and Producer Suki Fraser.

O2 wanted to communicate the deals they had on the Samsung Galaxy Z Flip3, but needed a fresh angle to help them stand out from competitors – or indeed Samsung’s own campaigns!

What stood out from this phone was not just the features it packed, but the entire aesthetic it represented – it instantly felt to us like a blast from the past (a good one!). The marketing objective was to grow sales of the Flip3 among under-34 fashionistas, and the communications objective was to focus on the Flip3’s features, namely its distinct folding functionalities.

How did the initial pitch/brainstorming phase go

The brief wasn’t given to a traditional creative team, it was specifically briefed into the Social & Influence creative specialism within VCCP.  The team immerse themselves on a daily basis in social trends, movements, moments and themes and really understand the mood and vibe of people on social and how to tap into those trends in their creative thinking.

This brief landed at just the right moment. The noughties are having a major positive nostalgia revival and it’s happening all over social media and especially on TikTok. Because of Covid, people are yearning for things that make them feel good.

The noughties are that era and people are ready to re-embrace a less angst-ridden time through pop bands, like STEPS to shows and movies like Legally Blonde that are both feel-good and care-free.

The revival has come from all angles, with social media influencers embracing Y2K fashion and beauty trends and flash mobs making a conscious comeback. The Samsung Galaxy Z Flip3 itself is a nod to the 2000s; when the flip phone ruled so it was a very natural step to connect the nostalgic trend and the phone. 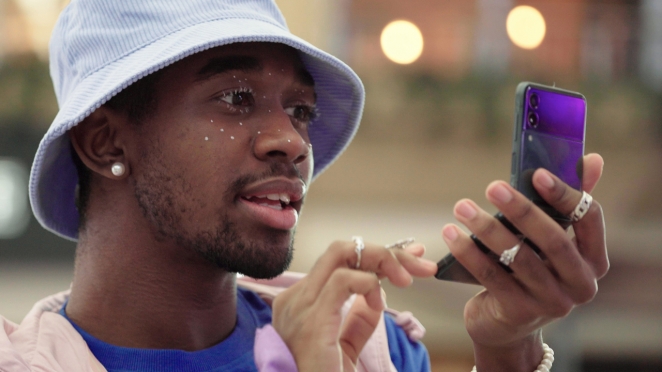 Flashmobs have changed thanks to TikTok and the continuous one-shot take. The new flashmobs tell a more nuanced story and are shot much more consciously with the POV to camera. So it was important that we found a production partner who understood this new world.

We enlisted Reuben Feels, a theatrical company who specialise in immersive storytelling through dance and have some of the best cast, crew, and creatives in the industry. The flashmob narrative had to stand up on its own so casting was super important.

Also, given that this film lives in social, it was important to feature creators who would not only resonate with our target audience but whose own community would love their involvement in the project. That’s why we also enlisted influencer-creators Tega Alexander, Izzi de Rosa, Francesca Perks and Cruze Philip.

Covid would be the first obstacle that comes to mind - as with any production in the past 2 years, managing covid and its impact on the shoot was a big focus. Members of Steps and their team started getting covid one by one just before the shoot.

Thankfully we were able to safely work around this and were only one member down on the shoot day. Steps also required all dancers and crew to be 4 metres away from them at all times to be extra safe for the sake of their tour. Working this into the choreography was tricky but our production partners at Reuben Feels were able to make it work seamlessly.

Another challenge we had was choreographing with 3 different parties; the dance troop, the influencers and Steps. With Steps being on tour and the influencers living around the country, we had very limited time to rehearse with each party and our first full run through with Steps was actually our first live Steps performance!

The final challenge that comes to mind would be the location. Steps were performing at The O2 on the same day of our flashmob. There were fans already at the venue which made for great reaction shots, however we had to ensure extra security to keep Steps safe, whilst keeping their required 4 metre social distance, and also maintaining the flashmob’s authenticity.

We had 6 camera ops simultaneously capturing the flashmob from different angles and as well as the reactions from the crowd. We also shot as much of the action as possible on the Samsung Galaxy Flip3 phones themselves. So the final films were a mix of both types of footage.

Covid was always going to potentially be a problem on this shoot, which happened as the UK was in the midst of the Omicron wave. So when one member of STEPS contracted the virus just before the shoot we had a bit of a go-no-go meeting.

But as we’ve been living with a pandemic for the last 2 years we were prepared for the worst case scenario and able to shoot safely with the remaining members of the band.

The message for this campaign became very simple: ‘The noughties just got an upgrade’. It was important to tap into the cultural undercurrent of noughties nostalgia, but also to show this was a phone that was genuinely worth its price tag, not just a retro flash in the pan.

This is an extremely stylish looking phone, that takes you back to a wonderful era, but packing all the features you’d expect from any high end mobile device in the market today.

This was a fast turnaround project that took 6 weeks from concept to completion (including all negotiations with Steps and influencers). Although due to sensitivities around Covid at the original launch date, it didn’t actually go live for another 6 weeks after completion.

We hoped to create a sweet spot that drives organic BTS content with creators, as well as PR opportunities and fame driving hero content to drive awareness and consideration of the Samsung Galaxy Z Flip3 on O2.

The campaign is still live so we don’t yet have results but there has been an overwhelming response from Steps fans to release the remixed track made specially for the film, and influencer, Izzi de Rosa’s content has had over over 490k views and 54k likes. 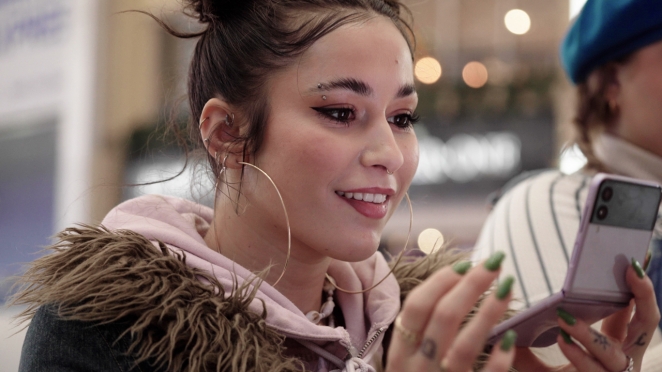 CAMPAIGN TITLE: ‘The noughties just got an upgrade’