A glimpse behind the veil of Sound Design | #MemberSpotlight

Most of the pictures you'll see of Volker Armbruster below picture him in his studio or next to a piano. We believe it is for a good reason.

We have no trouble imagining that Volker would rather spend time in his studio making some beautiful music or playing around with sound design, rather than doing anything else. His care for his craft and his interest in storytelling betrays a powerful and unwavering passion which he masterfully demonstrates in each of his own works. Take a look around his profile from the link above to get a taste of his expertise.

For this Member Spotlight, we are learning more about Volker and his path into the industry, as well as a few secrets about his much important role in the film and entertainment industry. 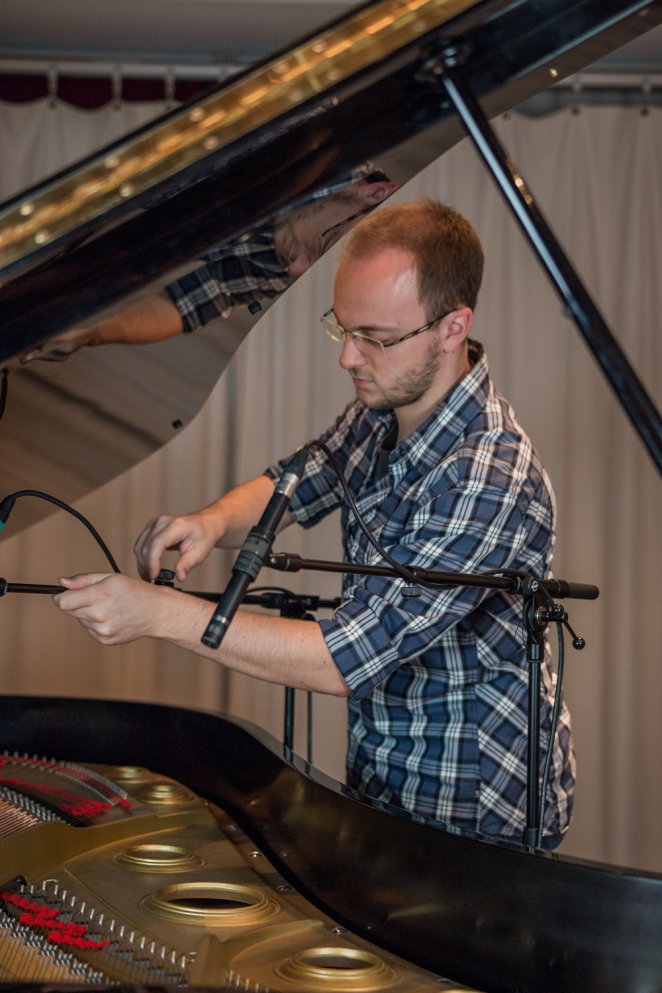 A real door opener was my master's degree at the Filmakademie Baden-Württemberg in Germany in film sound / sound design. Although I had been trying to get into the industry before, there I got so many good contacts and know-how. I still work with several friends from there and I'm still expanding my network.

I'm currently in Ludwigsburg (Baden-Württemberg, south western Germany) in my own studio facility. As a freelancer I work for the most different clients in really various projects. I have some very good contacts for which I work regularly and on the other side there are always completely new people to work with, what I also really like at being a freelancer. 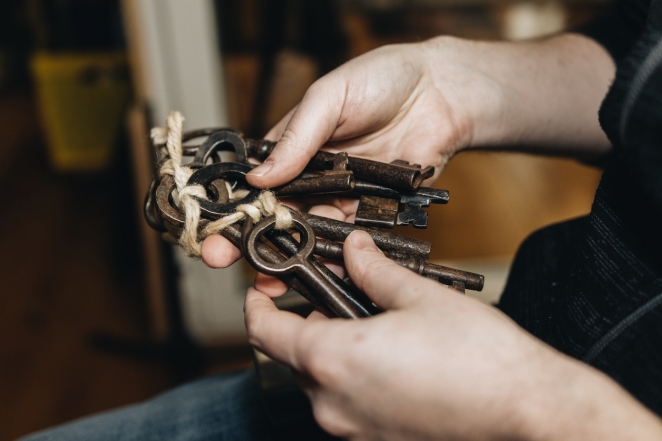 I could imagine being a guitar or mandolin maker! Maybe that is also a good plan for the future ;)

I like working in the foley department as well as in other sound postproduction departments. When we are recording foley, we usually get the first ideas when watching the movie the first time. You can say that the complete process is very creative. Even during the recording we have so many ideas. I always try to think in an integral way to be sure that I always have the whole sound concept in mind as well as the dramaturgy of the movie itself. We then try to get some life in the scenes or make things sound better or different as they sound in real.

When I do sound design or mixing it's basically the same. In smaller projects I sometimes do all the sound parts by myself. In bigger projects we are more sound people and everyone has a special job. Here you have to work hand in hand to get a homogenous soundtrack.

I have a soft spot for a smooth, natural and focused sound design with some weight and nice transitions between scenes and spaces. It really shouldn't distract from the story instead of supporting it.

I really love working with foley sounds, even when I'm mainly doing sound editing or mixing at a project and not foley. So everything has to sound right and at the same time you have to decide what are the important elements for the film and the message. I would say that I have a quite musical way of designing sounds and foley sounds. Maybe that's why I also work a lot on music projects for instance as scoring mixer or in music recordings. 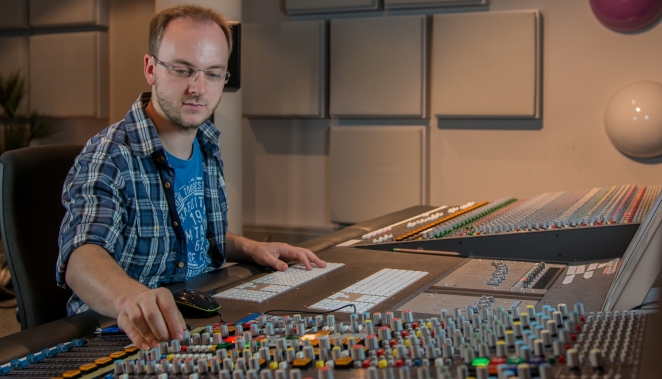 My heroes are some of the established foley artists in Germany and also other countries. Like Carsten Richter, Max Bauer or Martin Langenbach (all German foley artists). Furthermore one of my biggest hereos is maybe Shawn Murphy, a scoring mixer in Hollywood. You get a lot of inspiration by listening to their work and also when you watch them work.

But I also gain a lot of inspiration from my daily working partners here in Ludwigsburg or other colleagues I'm working with.

The ideal client or in my case maybe the movie director has its own vision of the film and maybe also the sound but is open to your ideas. And he or she trusts you and your expertise. So you can have a perfect symbiotic workflow. In the best case the whole team is working like this and you can get a great teamwork. It's really important to stay open to other ideas. 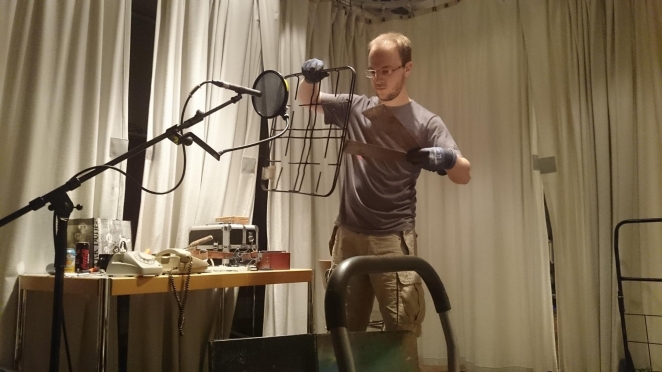 There are some real improvements on the technical side. There are little tools for noise reduction and stuff like that. But the foley work is more kind of traditional. That part is not that affected by technology than the other sound parts like editing or mixing I think.

I think a big part of staying inspired and motivated is that you have to love your job. We all are perhaps a bit nerdy or we really burn with compassion for our profession. So it all comes by itself. What also helps is a variety of projects. Why not doing a radio play between some movies or a own project? So you can go with a fresh mind into the next job an think 'Hey, I really like doing this kind of project again'. 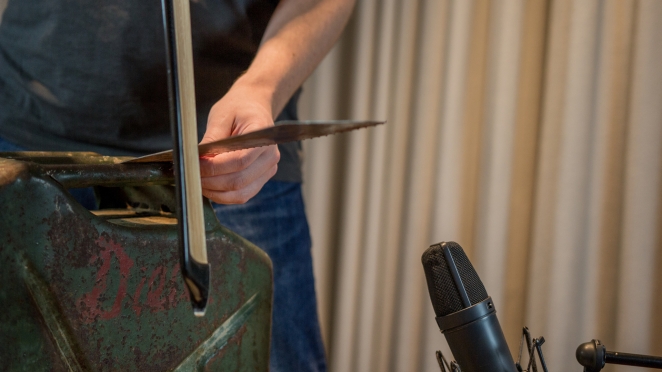 Maybe it's the fact that clients and colleagues always come back to me and that's obviously a good sign that they were satisfied with my work.
On the other hand there are some really cool projects I'm quite proud of. Most of the time they are cinematic documentaries like for example 'Le Ciel, la Terre et l'Homme' by Caroline Reucker or 'A Portrait on the Search for Happiness' by Benjamin Rost - they are very atmospheric documentaries in which you have a big space and great opportunities to tell the story though the sound. Also my latest project 'Dear Future Children' by Franz Böhm (which will be uploaded here soon) is one I'm really proud of. It was a huge effort of the whole team and it was such a great collaboration.

Usually by going into the nature. Thats a great contrast to the studio everyday life. I also have a personal music project which is really relaxing for me and in which I can regain energy. 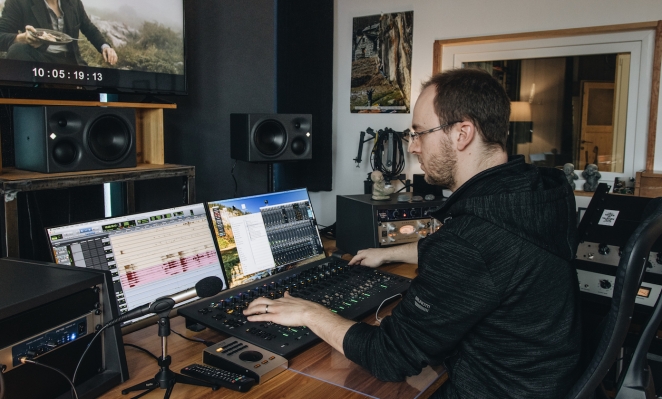 It's always good to be open to any kind of contacts. What's also very important besides your network and your skills is to be present so that people don't forget you. I personally am very focused on maintaining relationships, being reliable and sociable is nearly as important as your professional competence. People don't only have to call you because of your skills, they also have to because they like working with you.

In Germany there is a really strange hierarchy in film business. The treatment in those teams isn't always good and so aren't budgets. Often there are people to create your budget that don't really know what you are doing at all so that's sometimes really difficult. In general I would like to chance the way companies or producers compare the offers from different freelancers. The idea is not to get the cheapest service, no matter who does it - you have to look for someone who really fits for the project and the team, then you will get a real fruitful cooperation. And the price you pay will be worth the result so your project can be in best hands.

A classic lecture would be 'The Foley Grail' - I also really like soundworkscollection.com.

Top 25 most inspiring creative inventions and products of all time

When you look at the history of product design and the greatest innovations of all time, it’s hard to ignore how a large amount of incredibly amazing inventions have all started popping up rather recently. The golden age of innovation and...