The ruins of the Temple of Bel in Syria were among the best preserved at Palmyra until they were destroyed by the so-called Islamic State in Iraq and Syria last August. The only remaining monument of the over 2,000 year old UNESCO World Heritage Site is the 15-meter-high entrance arch, which the Institute for Digital Archaeology (IDA) is planning to rebuild globally as an act of defiance against the terrorists.

The IDA, which is a collaboration between Harvard University, the University of Oxford and Dubai’s Museum of the Future, will use 2D photographs along with images collected in their database to create a 3D model of the arch. The full-scale 3D printed replicas will be assembled and erected at Time Square in New York City and Trafalgar Square in London during World Heritage Week in April 2016. The installation will be created off-site and then assembled at Trafalgar Square and Times Square. In London, it will stand next to the National Gallery and Nelson's Column, both Neo-Classical in style. 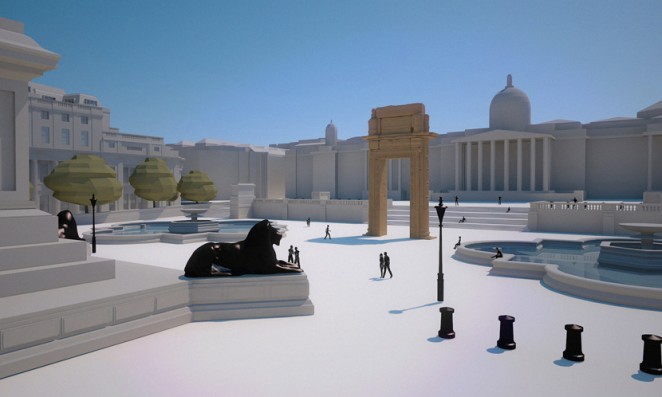 Located north-east of Damascus, the Palmyra Arch was an entryway to the Temple of Bel, which was situated within Palmyra, an important city in the ancient world. It sat on a trade route linking Persia, India and China. Palmyra was one of the most important cultural centres of the ancient world, so the attack was described by some as an assault on the underlying concepts of civilisation. It's unknown if the arch was fully destroyed, of course, but according to the institute's director of technology Alexy Karenowska, the object's uncertain status was part of the motivation for selecting it. She said: “Given the level of destruction in Palmyra, it seems unlikely it has survived without some damage, but if it remains standing in any form, it represents an outstanding symbol of resilience. If it doesn't, then the message is obviously just as powerful, but for different reasons.”

Founded in 2012, the IDA promotes the use of digital imaging and 3D printing in archaeology and conservation

Roger Michel, executive director of the IDA, added: “It is really a political statement, a call to action, to draw attention to what is happening in Syria and Iraq and now Libya. We are saying to them if you destroy something we can rebuild it again. The symbolic value of these sites is enormous, we are restoring dignity to people. While there are those who seek to encourage us to forget the past (to forget the shared history that unites us) we are dedicated to ensuring that the visual reminders that keep that history alive remain a part of the human experience.”

Founded in 2012, the IDA promotes the use of digital imaging and 3D printing in archaeology and conservation, and its digital archives are intended to encourage interdisciplinary collaboration and the crowd-sourcing of research. Earlier this year, in collaboration with UNESCO, the institute distributed 5,000 low-cost, 3D cameras to volunteer photographers in conflict zones in the Middle East and North Africa. The photographers were asked to take photos of threatened cultural objects and structures. The images will be uploaded to a database and will be used for research, educational programs and 3D replication. The organisation hopes to collect 20 million images of at-risk structures by 2017.