Weaving a tapestry of diversity for Black Lives Matter | #BehindTheIdea

Black Lives Matter is arguably the most important political movement of the last decade and its echoes have been felt in the ad world for well over a year now. Adding to the ever-building thrum of social rebalancing was a rather unique global creative campaign from Wunderman Thompson for HSBC last year, which was launched to celebrate Black creativity over Black History Month in October.

The work, “Tapestries of Diversity,” took six types of fabric as a starting point to amplify Black creativity, culture and heritage. It took African and Caribbean textile traditions and showcased them alongside intricate storytelling to explainin their histories.

The result was a suite of assets celebrating the identities, colours, rhythms and traditions of each fabric and telling the stories of Black people. We caught up with Wunderman Thompson Art Director and Designer, Rianna Woods, to reflect back on the campaign and how the influence and beauty of the fabrics is ultimately secondary to their history.

The global Black Lives Matter movement has highlighted longstanding issues around racism and discrimination. Likewise, the dedicated month for Black History was envisioned to counter the invisibility of black people and to challenge the negative stereotypes pictured in popular culture.

HSBC believes that, to truly be a global bank for people, it is their responsibility to not shy away from important issues like diversity. HSBC wanted to mark Black History Month with a global creative campaign to celebrate and amplify Black culture, creativity and identity, backed up by their goal to drive change and not continue business as usual. 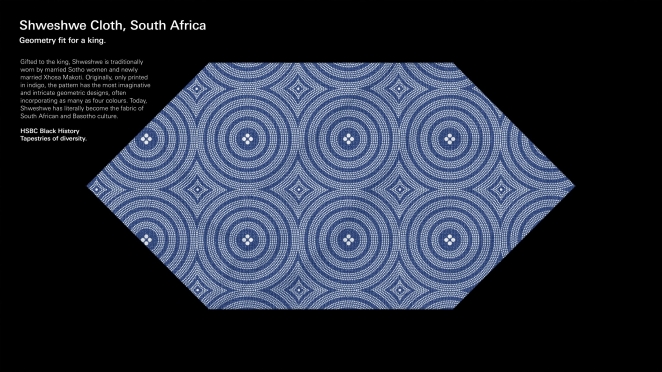 In 2020, HSBC honoured their Black employees with a platform to share their stories, however this year they wanted to find other ways to hero Black representation and identity. We started to explore how we could demonstrate the Black experience alongside fresh insights.

The creative concept developed into a global campaign, ‘Tapestries of Diversity’, which focuses on six types of fabric. The purpose is to celebrate the identities, colours, rhythms and traditions of each fabric and, at the heart of it, tell the stories of Black people.

‘Tapestries of Diversity’ allowed HSBC to tell multiple stories at once and, most importantly, tell stories that were unfamiliar to many and that we hoped would inspire people to find out more.

The Black experience can’t be told in one story, so this series wove many stories form past and present together. In many Black cultures, patterns are used as an intricate display of personal adornment and expression as well as a way of communicate, so what better way to tell a tale of identity? 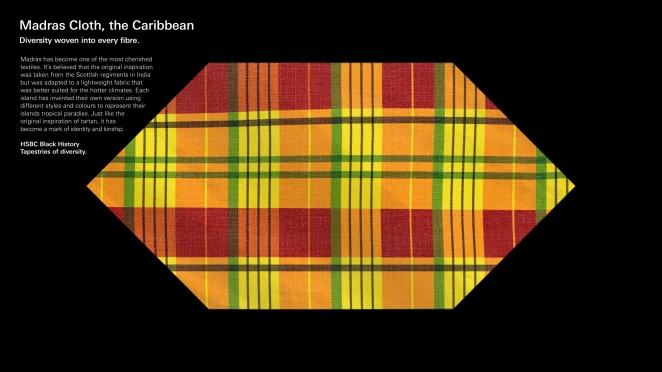 Six patterns were chosen from various African & Caribbean cultures, with each one carefully researched before individual stories were authored for each – stories that give an insight into their origin as well as a glimpse into the social, religious and political contexts of each textile.

Once the patterns had been digitally illustrated and designed, all six were combined into a tapestry, a detailed amalgamation to show how stories and cultures intertwine.

The six textiles featured were:

Our biggest challenge was finding the balance between showing the patterns in their truest form, while making sure the campaign still felt inherently true to HSBC. Careful and thorough research for the textile stories and detailed recreation of the patterns, from physical to digital, kept the tapestry as authentic as possible.

And yet, the HSBC hexagon makes it ownable to the brand, also giving it the global touch that it needed. These were also some of the first iterations to go live with the new brand look and feel for HSBC!

Finally, we rolled the visuals across a series of assets for HSBC media – from Zoom backgrounds, to email headers and banners. You’ll also see the textiles and descriptions on their social media channels. 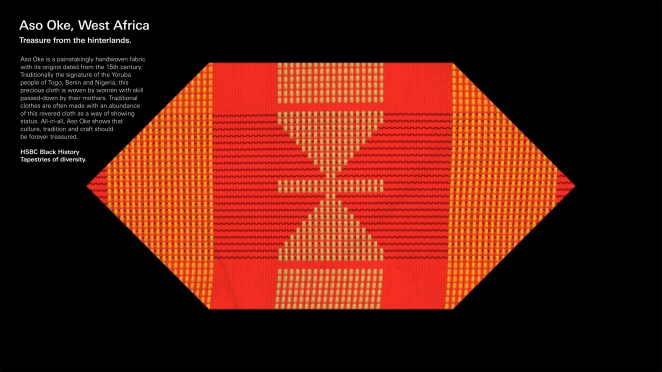 HSBC has worked very hard over the last year on their new guidelines to evolve the brand. Our brief was given in tandem to this evolution, which meant that as the creative development of the campaign progressed, so did the guidelines.

Evolving guidelines could have posed a challenge, but we worked closely with the HSBC brand team to make sure that everything we did aligned to the guidelines but didn’t dilute the concept that we all fell in love with.

HSBC are championing the fact that African and Caribbean textiles, with their brilliant, detailed designs and their painstaking craftsmanship have, and will always be, a celebration of the rich tapestry that wraps itself beautifully around our planet.

The influence and range of these fabrics is truly breathtaking. For example, the vibrancy and artifice of Kente, Shweshwe and Aso Oke, (to name a few) have made such an impact that they have become part of the everyday fabric of so many cultures.

Campaigns like this matter because, as we learn more about the Black experience especially through their history, we lessen the feelings of otherness and start to make strides in eradicating the inequality that still exists in society today.

The concept itself is unique. Not only were we celebrating Black History Month but we’re taking the opportunity to create something that’s also educational, informative and truly interesting.

HSBC, as a bank, is steering this important dialogue in a way that’s not patronising or superficial, but instead communicates why conversations like diversity are so essential today. It’s notable that HSBC is marking Black History Month with this campaign, amplifying the stories of the people who created the patterns and the diverse cultures from which they emerged.

The influence and beauty of the patterns that make up the tapestry is undeniable, but their history is even more so. While they may have become commonplace in some cultures around the world, their stories can fade away. Skills that are passed down from generations, traditions that still live on, and garments worn so effortlessly makes these fabrics truly breathtaking. 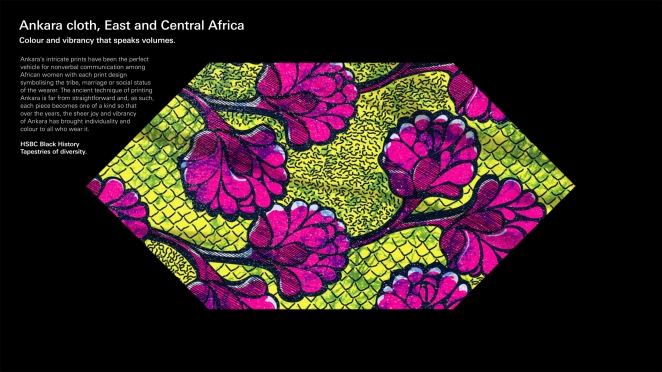 Tapestries of Diversity reinforces HSBC’s unwavering commitment to diversity and inclusion and strong intent to drive change, making it clear that they are not going to continue business as usual.