For this week’s member spotlight, we turn our focus to Alan Parry, a “a post-production nerd turned video production swiss army knife.” He freelances under the name Velvet Pig and specialises as an editor and motion graphics designer.

My first gig was as a runner on a British TV chat show called The Johnathan Ross show. Purely a result of lots of emails being sent and one landing in the right inbox at the right time. Similar story with my first editing job, which launched me into my career for real.

Befriended a German chap at an event, turned out he, an Austrian and an Englishman (sounds like the set-up to a joke I know) were running a production company in London and were looking for another body, I came in and they put me to work cutting everything from corporates to TVC’s and music videos. 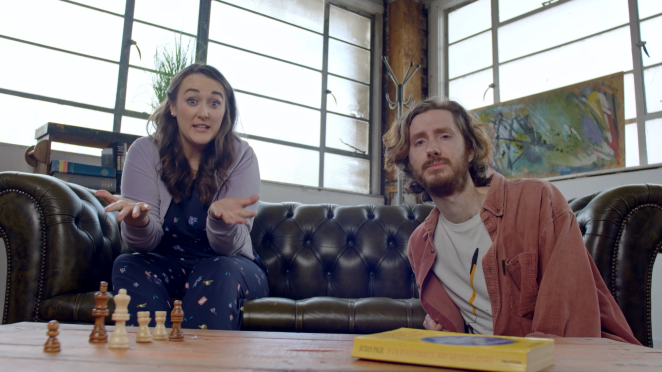 I’ve asked myself that a few times over the last few months, honestly I’d love to try and work on video games, I’ve always been interested in the world-building that goes into some of those universes and the unique possibilities for storytelling. Like most posties though, I’d probably have a decent chance at working in tech support with all the workflow and adobe headaches over the years.

The whole “unique” thing gives me ick. I’m like most creatives I think, go into projects with the best intentions to prep, script, storyboard and dev… but just can't help myself but tinker once I get started. I do tend to end up “going off” my work the closer I get to finishing - even my best work. So it’s important to have collaborators who can reign me in and keep me from wanting to rework everything.

I like simplicity and minimalism, and a bit of sly humour. Graphically I have a soft spot for kinetic typography work, not all of which has aged well over the years but when done well can still look fantastic to this day. Film-wise nothing “feels” cleaner than long takes like the classic Goodfellas… maybe I’m just a lazy editor?

No individuals that come to mind, for inspiration I think we have to think ourselves lucky to be here, now. There are so many talented people who aren’t even in the industry and just doing cool things online. YouTube, Instagram, Reddit not to mention the more industry-targeted sites brimming with cool projects where I’m left wondering “how the f#ck did they do that?”

Do what you can to get a portfolio together. A reel or some videos that show what you’re capable of is so much more valuable than a CV. Not to mention it shows initiative, passion and a willingness to experiment.

Ha! If I had that figured out I’d be a happy man… or selling courses on Instagram/TikTok/LinkedIn. My biggest hurdle was getting over the anxiety around reaching out to people to see if they had work going. Cold emails suck. Just try to make yours a little less sucky and don’t take it personally if you don’t get a response.

Honestly Google Calendar. So simple but I tend to have a lot of plates spinning. Just putting it all in my calendar or writing a to-do list helps get it out of my head and focused on the task at hand. Notion is a great app/site for organising your life/business and collaborating too.

I think this is something you have to work at sometimes. Occasionally something cool will drop in your lap and inspire you. Other times you’ve gotta go looking. Like I’ve said, Reddit, YouTube and Instagram are full of creative people smashing it, but you’ve got to go looking. It’s part of your job.

Getting enough money in the bank at Velvet Pig to self-fund a spec project. Had to call in a few favours to make the budget stretch. But seeing everyone there excited to shoot something I was funding for no other reason than to make something cool was really special. I won't forget it.

The Nepotism. We all know it's an issue.

The Freelance Manifesto - Joey Korenman - For those looking to go freelance.

Ben Marriott on Youtube - For those looking to get into motion graphics, or maybe a new trick.

Every frame a painting on Youtube - Not a super original pick I’m sure, but if you’ve not seen the channel, it's worth a look.

The importance of visualisation in programmatic DOOH campaigns

Digital Out of Home (DOOH) has made outdoor audiences easier to engage with for brands of all sizes. With a variety of screen sizes, and more campaign flexibility, many brands are taking the plunge for the first time. For those looking to take...

Tom Burch is MD of immersive experience company Pixel Artworks and has been creating wonder with his work for brands since he founded the business in 2005. From creating fire-breathing dragons for Warwick Castle to planting the Garden of Light for...

Are robots replacing us?

This is a question those in the creative industry have probably asked themselves in the past few years. Hugo Evans, senior designer at We Are Tilt has a decade-long career spanning branding, print and digital. The arrival of artificial intelligence...

Posted by: We Are Tilt