Who said great sleep can't be engineered? British mattress company Simba has been working on mattresses that would capture the perfect essence of great sleep and, in order to stand out amidst the competition, the brand needed a campaign that would spring their new positioning into action.

Today we are getting Behind the Idea following a quick chat with Imogen Hargreaves, Creative Project Director at the Garage Soho. 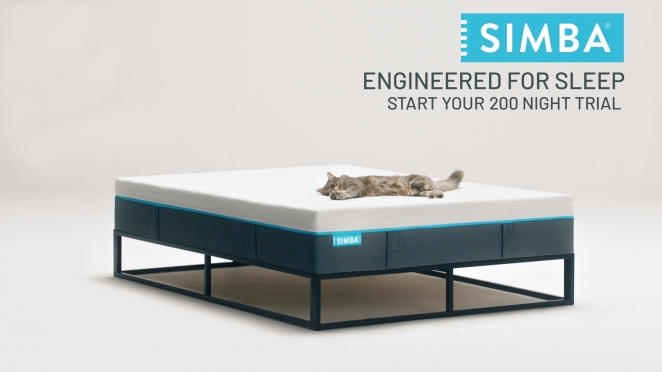 We were tasked with showcasing Simba’s ‘engineering thought-process’. Simba is constantly striving to provide a better night's sleep, with R&D sitting at the heart of the business, on a continuous journey of innovation. We wanted to showcase this, whilst also connecting to the consumer on a human level - ‘humanising the technology’.

We believe in heroing the product and therefore that is where we started. After a deep dive into the mattress, we quickly realised that the hero of this particular piece would be the 5,000 titanium springs. Great sleep doesn’t happen overnight. It’s engineered. Simba’s unique patented titanium AerocoilⓇ springs intelligently and individually map to your body shape and unlike memory foam, they allow air to flow through the mattress; keeping you cool and well supported for an undisturbed sleep. However, it was important to not just show the springs, but to showcase the joy that a comfortable night's sleep can evoke.

Sir John wanted to capture that feeling of comfort, and ultimately the feeling of weightlessness. He was quick to land on the idea of people jumping in and out of screen with a look of pure joy. Heaven was the perfect song choice and it instantly conveyed the message we wanted people to hear.

Undoubtedly sourcing a suitable cat! The cat helped bring humour to the overall piece and encapsulated the ‘joy’ that we wanted to convey. So it was crucial that it was included. However, finding a cat that was willing, definitely had its challenges. Luckily we were working with a fabulous team at Mrs Baxter and Another Film Company who helped source the perfect cat.

Again, I think this would come back to the cat. In case our actual cat didn’t perform we had a back up plan of a very realistic catsuit worn by a human which we had planned to fix up in post. There was a very surreal moment when the actor wearing the catsuit held our actual cat - it was a combination of hilarious and also completely bizarre.

We hope to convey that feeling of ‘heaven’ that comes from a better night's sleep. Simba’s approach is centred on engineering a more comfortable night's sleep for all. We wanted consumers to instantly understand this and of course also watch the advert with a smile on their face.

It puts the product at the heart of the communication, whilst remaining distinctive and humorous. We envisage this being a long term campaign that can be successful across all media. What we’ve created here is a device - our characters jumping into frame - so that this visual can consistently work with Simba’s ‘Engineered for Sleep’ line with adaptation. From introducing new weightless characters, to topical versions for particular moments and celebrations throughout the year, for example, giving our characters a Christmas twist.

It was around three and a half months.

Simba is on an incredible journey and their technology continues to evolve in leaps and bounds. We hope this piece of communication articulates the power of their product and helps counter the mindset that ‘all mattresses are the same’. We believe in their product and hope others will too.

Traditionally, the Army has been mostly regarded as an environment where only men could find their place. Yet, there's an argument that the very nature of the Army makes everything equal; based on that, there's no reason why women shouldn't feel like...

Run For The Hills is a creative design house specialising in interiors, branding and original art. The team is made up of experts in a number of sectors, from property to hospitality and boutique residential - and they decided to launch their very...