The Reverse Selfie of Dove and Ogilvy – #BehindTheIdea

Dove has become an incredibly well-known brand for challenging the established standards of "beauty" and promoting natural beauty across all ages. With this campaign by Ogilvy, the brand reached entirely new heights.

The video campaign below shows a young girl in the process of snapping a selfie with the aid of retouching apps... In reverse. It brings attention on the natural beauty of the protagonist, which doesn't need retouching apps to shake her confidence – nor the one of countless other women worldwide. The video is a simple and arresting idea which gave us the chills, and one we were proud to discuss with the team at Ogilvy itself.

Today we are getting Behind the Idea following a chat with Juliana Paracencio, Global Creative Director at Ogilvy UK, to learn more about the outstanding campaign below.

Dove has always believed that beauty is not defined by shape, size or colour, but by feeling the best version of yourself - authentic, unique, real and true. The brand has established itself as one of the world’s most iconic and purpose-led brands, and it has been fighting unrealistic beauty standards for years.

Fifteen years ago, the media and beauty industry were retouching and distorting images of women and girls. With the iconic campaign for Real Beauty and ground-breaking ‘Evolution’ film, Dove brought this to the world’s attention, pioneering a change and upheaval in the industry.

Now, a new generation is facing a new set of pressures. Young girls are retouching their own images for social media, making the dangers of digital manipulation much more worrying. The perils of social media are widely documented, but the harm of apps and filters are just surfacing. By the age of 13, 80% of girls distort the way they look online. With more and more apps and more screen-time, the pandemic has made things worse, causing a self-esteem and confidence crisis within our girls. Dove wanted to step up and ignite a revolution for change once again.

This was my very first brief at Ogilvy UK. The initial phase of this project was very smooth (apart from the fact that I just moved to a new country in the middle of a pandemic). I moved to London in March last year, a few days before starting at Ogilvy and joining the Dove Global Team. Luckily, I was able to go to the office in my first week and get to know my colleagues and clients personally. Then, in my second week at work, the lockdown happened, and since then, we have been working from home.

We were briefed whilst still at the office, and then in the next week, we presented our first (and only) round of ideas to our client over a zoom call. ‘Reverse Selfie’ was one of the first ideas we presented, and the client immediately liked it. They fell in love with the idea of doing a modernised sequel to Dove’s 'Evolution' film of 2006. 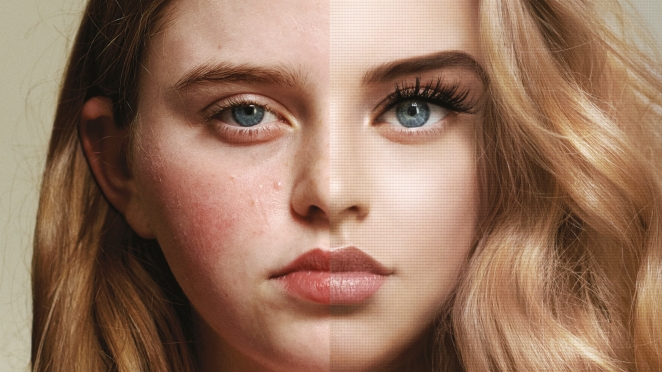 ‘Reverse Selfie’ is a sequel to the groundbreaking film, 'Evolution'. Created in 2006, Evolution tackled retouching in the beauty industry, the unrealistic standards it was setting and how it was affecting millions of young girls’ self-esteem. Fifteen years on, and the world has changed, but the enemy is still the same. This time the situation is far worse. Instead of the industry retouching images, girls as young as 13 openly use face apps and retouching tools to alter their appearance with a few clicks.

We wanted to start a movement and drive a conversation around the topic. To do this, we targeted parents, showing them the damaging journey girls go through to achieve the ‘perfect selfie’ and how harmful it can be to self-esteem. Reversing back through this journey, our poignant film hits home and encourages parents to download our social media kit so they can have The Selfie Talk with their kids.

For authenticity, the retouching seen in the film was replicated based exactly on the same apps every girl has access to every day. Using the same techniques to achieve an accurate result, we took the girl from a manipulated 19-year-old woman to a naturally beautiful 12-year-old within a few clicks of a button. It’s scary and heart-breaking to see how easy it is.

The campaign has sparked a big conversation around the issue, gathering over 3.8 billion global earned impressions, with the USA achieving 1.9 billion in the first two days alone.

Over a year in the making and shot during the pandemic, the production process was intense. But I couldn’t be prouder.

During the pandemic, things had a different pace; everything was done to make everyone safe, we followed government guidelines to the letter. Naturally, this slowed us down, but we knew the urgency to raise awareness and educate millions of young girls worldwide, so we were all very passionate to make it happen in the best way possible.

One of our biggest challenges was to keep the campaign real and authentic from beginning to end, so we spent a lot of time ensuring every step in our journey was towards that.

We did not have actresses or models. To honour Dove’s legacy of authenticity, we cast real girls who had experienced this all first-hand and retold their stories, reflecting how the apps they use daily make them feel. Our featured film follows Grace and her daily experience of trying to achieve the ‘perfect selfie’. All the other girls featured in our campaign, including Grace, were cast because of their experience. And to make this campaign truly authentic, the photos featured in both film and print were created using the same retouching apps used by millions of teenage girls. 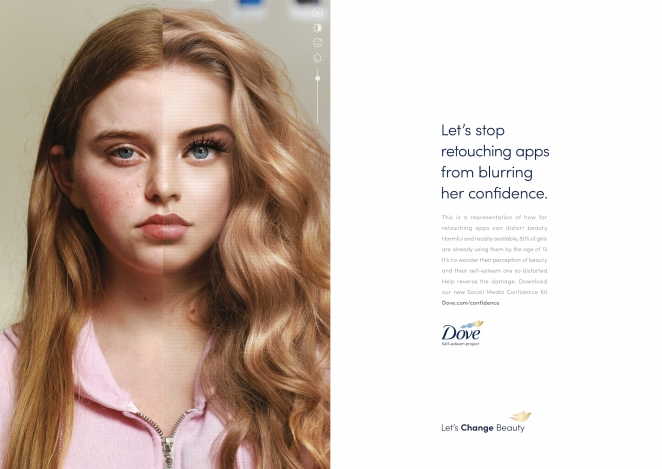 Before working on this brief, I had an idea that filters and face apps were toxic. But it’s only when I took a deep dive into this project, I appreciated the scale of the problem. It’s eye opening. Over 80% of girls distort the way they look online before the age of 13.

The most sobering moment, however, is when it came to speaking to the girls themselves. They used the apps so freely and you could literally see how the distortion was affecting their self-esteem, it was heart-breaking. It’s even scarier to think of the rise of selfie-dysmorphia and how attainable these powerful digital tools are to every young girl around the world.

It really spurred us on to make this campaign to the best of our abilities.

A staggering 80% of young girls are now using retouching apps by the age of 13. This heart-breaking fact forms the basis of our new global campaign for Dove.

Targeting parents, our purpose was to raise awareness of these new enemies, encourage all families to have ‘The Selfie Talk’ with their children and start a movement to change selfie culture. The whole campaign further acts to bolster Dove’s Self-Esteem Project – the largest self-esteem education program in the world.

More than a campaign, we wanted to create a real movement to change the selfie culture. To spark a conversation around such a serious issue, we had to stay true from beginning to end. So, the authenticity of our campaign surely is the unique aspect.

Besides casting real girls, we retouched all the pictures in the campaign using real retouching apps available to every girl. We used exactly the same techniques to achieve an accurate result.

The journey we did to keep our campaign genuine was certainly something to be proud of. Our post-production partners, both in film and in print, have embarked headlong with us all the way. 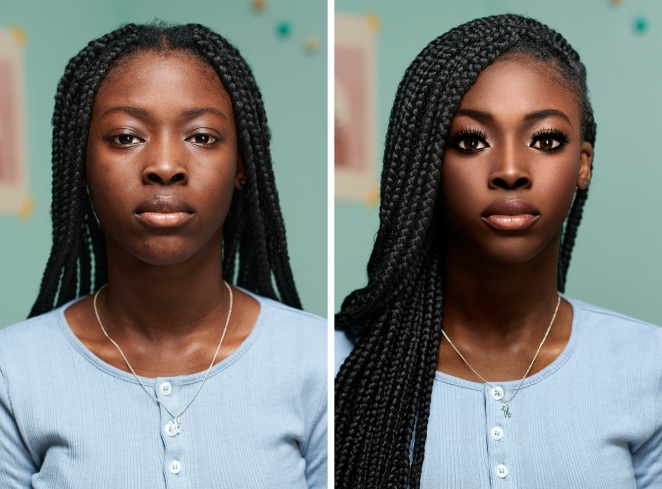 We got the creative brief in March 2020, so it was over a year in the making. It was a global campaign, tackling a serious issue that has been affecting millions of children worldwide. A lot of our time was spent ensuring every step in our journey was towards making the campaign real and authentic, from beginning to end. Also, during the pandemic, things had a different pace; everything was done to make everyone safe, we followed government guidelines to the letter. But we knew the urgency to raise awareness and educate millions of young girls worldwide, and we were all very passionate to make it happen in the best way possible.

Social media has grown to be part of our everyday lives. Digital distortion is happening more than ever, and it is harming the self-esteem of millions of children around the world. Unfortunately, not enough people talk about the issue. Hopefully, our campaign will change that. And encourage not only parents to help their kids navigate social media but everyone who knows a child who might need help. When the campaign was out, some friends of mine who are teachers texted me saying they shared the campaign with their students without even knowing I was behind it. That was rewarding to hear. I hope our campaign keeps serving as an educational piece worldwide and makes a difference in people's lives. 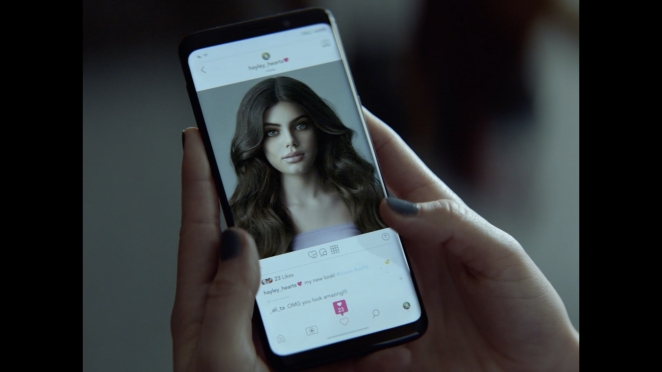