Among the many sectors which felt the Covid-19 crisis, business tourism was certainly one of the loudest. However, as vaccinations proceed steadily and most central hubs reopen around the world, YesMilano saw an opportunity to relaunch Milan as a global destination for business tourism – and partnered with We Are Social Milan to serve the purpose with a digital and OOH campaign.

The result is the Not in Milano campaign, an authentic and honest depiction of the most evident pain points of business travel, presenting Milan as a must-see destination in the next year. The campaign well highlights the cultural and historical heritage of the Italian city, and it was launched internationally – with digital billboards spotted in London and Milan, and a social-first dimension launched in New York, Paris, Berlin and London.

Today we are getting Behind the Idea following a chat with Alessandro Sciarpelletti, Executive Creative Director at We Are Social Milan, to learn more about the campaign below.

We’ve been asked by Milano & Partners, the official promotional agency of YesMilano, the brand of city of Milano, to develop a communication campaign to relaunch Milan's reputation as an ideal destination for congresses, large business events - whose performance in presence has been made possible since July 1 - but also for business trips that can be a perfect gateway to the city and what it can offer in terms of lifestyle and quality of life.

In the last year more than ever, we've realized that managing the delicate work-life balance is very difficult, especially with the advent of pandemics and smart working. But statements like Mark Zuckerberg's, "Do you ever get so excited about what you're working on that you forget to eat meals?" amuse the Italians and especially people from Milan a lot.

In Milan we have always been used to doing business quickly and well, but without forgetting our envied lifestyle because the two things go hand in hand and are often interrelated.

We thought about how we could tell the story of business in Milan by leveraging all those moments that have always combined the working sphere and high quality of life in our days: a balance that allows us to offer so much also to those who travel in our country for work.

The entire communication is based on the creative concept 'Not in Milano': an exaggeration of the stereotypical phrases and clichés related to business trips, which are disproved by caption and images, telling a Milan where work combines with a high quality of life.

On the occasion of the post-pandemic restart, we addressed the tourists inviting them to Italy’s financial capital. We did so by leveraging on all elements that distinguish the city, making it the perfect destination for business travellers: Lifestyle, Sociality, Heritage, Mobility, Sustainability and Gateway to Italy.

And we did so by involving relevant personalities and relevant locations representatives of the city of Milan and of its most relevant pillars. 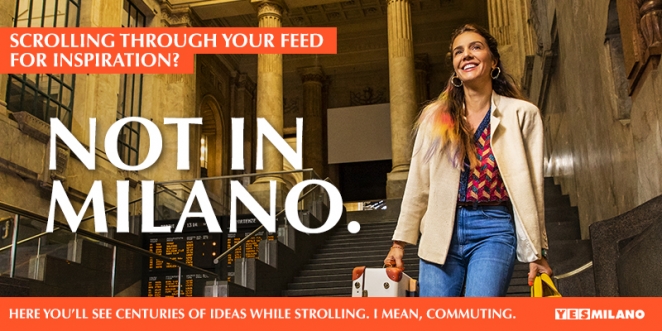 The most challenging part of the production process was definitely the fact that every player of this project gave its time and experites for free, offering the campaign to the city. At first we thought that it would have been really hard to find the right personalities but instead we have been very pleased by the fact that everyone that took part in the project was happy to do so and proactive since the very first day. We all worked (and had fun!) as a team, proud to tell the story of our beloved city that is part of who we are and what we do every day.

Due to the summer break, the production schedule was very strict but also very well organized. Everything seemed perfectly scheduled, however, we hadn't taken into account that on the second day, we would not only have to run but also struggle with summer thunderstorms that made the production (totally outdoors) definitely challenging but also fun!

The pandemic has had a negative effect on many sectors, including business-related tourism. With three-quarters of the Milanese and Lombard population already vaccinated, Milan - which continues to closely monitor the international health situation - has reopened and is experiencing a renaissance, as tourists resume travelling for business and pleasure.

The creative project “Not in Milano” wants to communicate that doing business well does not mean renouncing a high quality of life and lifestyle and that Milan is the proof. 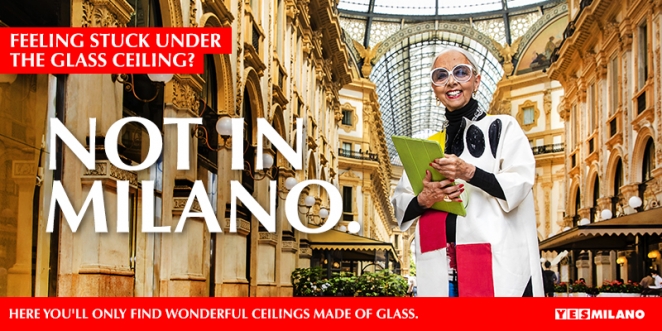 The whole team, but also the Mayor of the city of Milan himself, had the courage to use a high-impact message - Not in  Milano - which at first could seem to tell exactly the opposite of what we wanted to communicate. In this way we had the opportunity to convey both our message and the strong DNA of the city.

From briefing to delivery, it was about a month and a half.

The main goal for us is that the campaign will intrigue the target audience and encourage them to organize their next business trips to Milan. We hope the campaign will tell Milan not only as a business city but also as a gateway to a number of things and everything that makes it unique in the world. Because combining business excellence and quality of life is possible, but not everywhere. 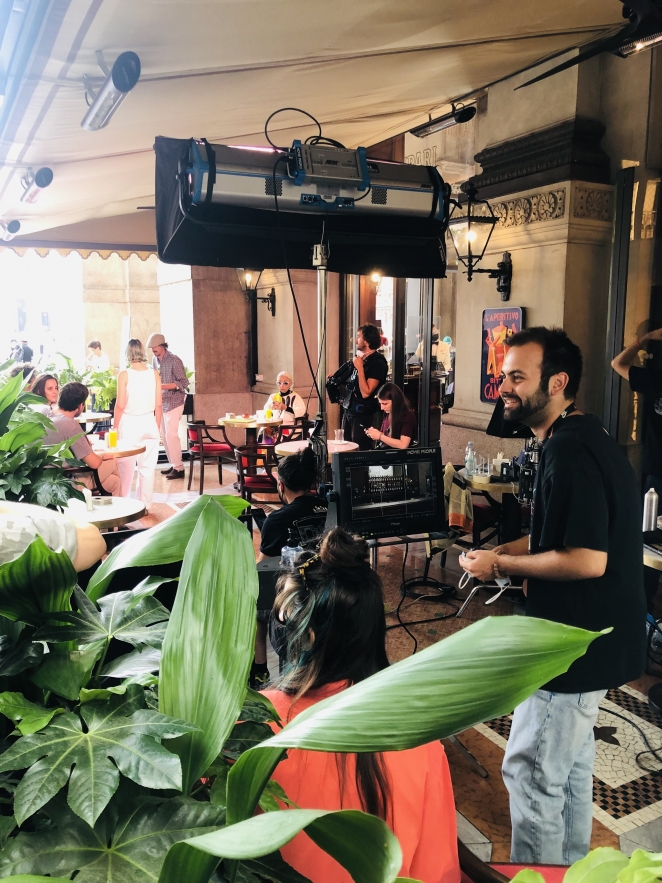