As the UEFA Euro 2020 captures the headlines across Europe (with much regret across England), the time is now to celebrate a different group of footballers: the amputees from the Salone Flying Stars.

The Sierra Leone Civil War killed over 50,000 people in little over a decade, and many who survived suffered terrible consequences – be it in the form of PTSD or the loss of one (or more) limbs. All of the players in the Salone Flying Stars team are victims of civil war amputations and display a strength beyond human comprehension, a resilience which enabled them to find some peace of mind in the wonders of football.

Today we are getting Behind the Idea following a chat with award-winning Photographer & Director Todd Antony, the man behind the stunning photographs below (and a video to come soon). 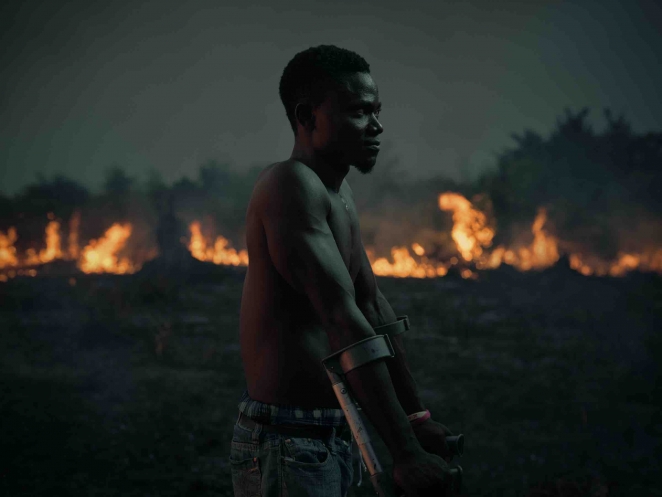 What was the original idea?

This was a personal project. Over the last few years my projects have taken me around the world to shoot little known groups or subcultures. Ordinary people that lead extraordinary lives in their own way, and who have a story to tell.

As I mentioned, my personal projects over the last 7 or so years have been focussed on little known groups or subcultures. Ordinary people that lead extraordinary lives in their own way, and who have a story to tell. The Flying Stars are the absolute epitome of that. They have experienced huge adversity from a young age and have grown from that with a strength and resilience that few could claim to have. It’s exactly this that I wanted to capture in the images of them, as well as showcasing the incredible athletes that they are.

The civil war in Sierra Leone (1991-2002) not only killed more than 50,000 people, it also led to thousands of innocent civilians having legs, arms or hands forcibly amputated by rebel soldiers. Or removed by landmines and bullets. 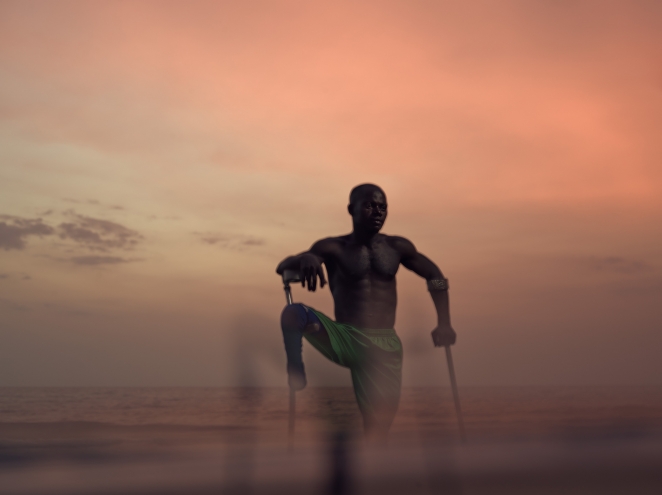 The Flying Star Amputees are a group of football teams across Sierra Leone born out of the adversity of this war.

All the players are victims of civil war amputations, and football has helped to bring them some degree of happiness, confidence and hope for a better future for disabled people in Sierra Leone. The rebels who committed these atrocities still live in the population. They could be a neighbour. So while the country collectively made the decision to forgive the rebels in order to move forward as a nation, the players told me that they can never forget. They physically live with the reminder and the ghosts of their past every day.

I wanted a number of the portraits in the project to get across some small sense of the trauma the players have experienced in their lives, by implementing a number of in camera techniques to achieve this. Using lens diopters and slow shutter speeds to create ghosting and jarring effects within the image that allude to the trauma and ghosts of their past experiences. In some images the refracting nature of the diopters I placed in front of the lens create a blurry, mirror ghost image of their remaining leg where their missing leg would otherwise be. 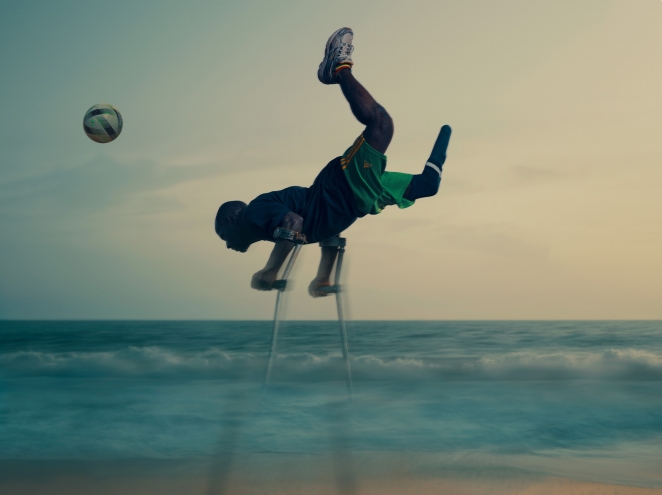 The locations they are depicted in play a large part of their lives. Every week in the late Sunday afternoon light, as the day cools very slightly from the mid 30’s, the players from the Freetown team practice on a sandy pitch at Lumley Beach which is where a number of the images were from the series were taken.

Likewise the pitches they play matches on are of hard earth and stone chip, the vibrant colour of burnt umber and terracotta. The fine red dust constantly kicked up into the air. I used this dust to create a sense of energy and strength within a number of the ‘action’ images in the series which showcase the players incredible athletic abilities. The vibrancy of the red earth and rich green of the jungle are ever present in Sierra Leone so I wanted to include that to some degree.

In the case of Umaru Sandi standing in front of the burning jungle, I wanted to use the flames as a visual metaphor for the war and the turmoil both he and the country faced during that period and beyond.

There were quite a few challenges to overcome in the production process. Covid being the most obvious one. I spent about a year looking for a window where it was safe enough to fly out to Sierra Leone and the various restrictions in both countries allowed it. And that had to be further juggled with the timing of the seasons in Sierra Leone, as shooting in the wet season just wouldn’t be feasible when it can rain for days on end. Then in the lead up to the shoot there was an Ebola outbreak in neighbouring Guinea which I had to keep a pretty close eye on in case it spilt over into Sierra Leone. 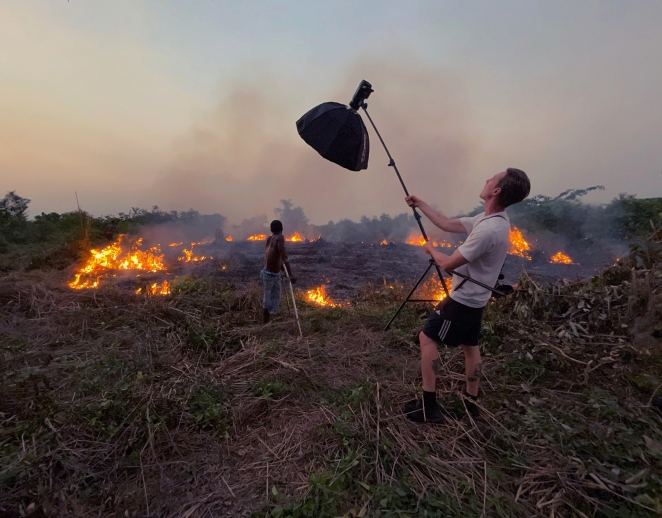 In terms of crew, it was just myself and my assistant Harry who flew out from the UK along with 10 cases of equipment for both the photography and filming, as well as 2 cases of crutches we shipped out with us for the players, as the price of crutches over there make it impossible for the players to buy themselves as they are prohibitively expensive. Up to 10-12 more than what they cost here. On the ground in SL we had an amazing fixer called Kabba to work with us and liaise with the teams and players. It just wouldn’t have been possible without him. Once we were on the ground there it was a case of working out how to divide our time between photography and filming (the short film is still in the editing process at this point) And although I had a rough framework in place in advance of the shoot, we had to keep things pretty flexible and nail things down on a day to day basis as we were shooting.

What is one funny or notable thing that happened during the production of the project?

Our production vehicle was loaded to the roof with us and our equipment and I’m not sure it’ll ever be quite the same again. It was one of those people carrier family cars with the sliding doors in the back. That was until ours just slid completely off one day. But this wasn’t before wed run out of petrol, had a flat tyre, found our driver Paul ferreting around under the car one day apparently trying to fix the brakes, and losing a wing mirror as we passed close enough to another car that we could almost smell what they ate for lunch. My only surprise was that it took as long as it did to lose a mirror given our frequent sharp inhalations of breath as we narrowly avoided imminent catastrophe.

In all seriousness though, the 2 weeks that I spent with the players was an indelible experience. The players letting me into their lives and spending time with them listening to their stories will always stay with me. 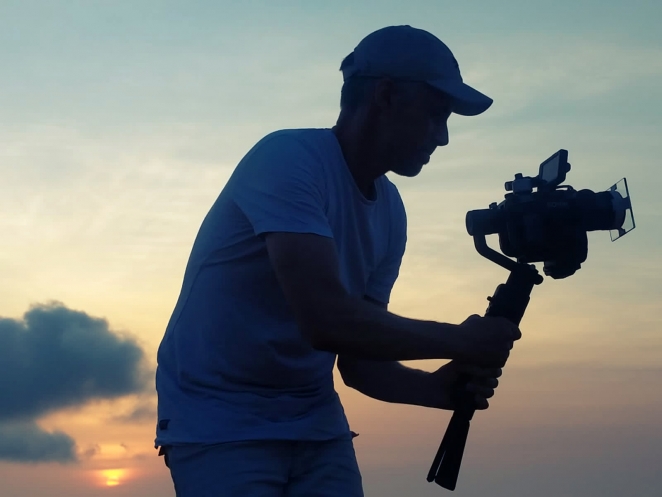 What’s the main message of the project and why does it matter?

In a year and counting seemingly all consumed by Covid19 I think it’s all too easy for smaller more localised stories like this to get lost in amongst it all. Which in my mind makes it even more important to tell them.

Although theirs is a story rooted in trauma and pain, it’s also very much one of inspiration in trying to overcome extreme adversity. And in the current climate this is even more than normal, probably something we can all take some small lesson or inspiration from.

It took a little over a year from the first time I came across the players while researching for a new part of my project, to getting over to Sierra Leone to shoot it. 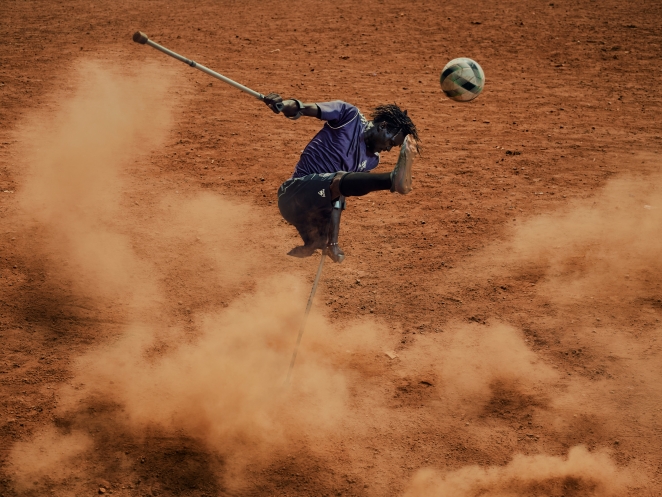 What do you hope this project achieves?

One thing I’m always conscious of when shooting these personal projects is that it’s not just a case of me flying in somewhere, taking some photos and flying out again. A purely transactional experience. I want to spend time with my subjects, learning about them and their lives, and if possible I want the photos to provide some sort of tangible benefit for the people I'm shooting. In the case of my Sierra Leone project I felt more compelled than ever to ensure this was the case.

With no support from the government, the teams have no funding for things like crutches, ferrules (the hard rubber feet on the bottom of the crutches) or transport to play matches with other disabled teams. Sierra Leone is the 6th poorest country in the world, and yet purchasing a set of crutches there costs 10-12 times more than in countries like the U.K. or U.S.

So I’ve set up a GoFundMe with the initial aim of providing all 150 Flying Stars players across Sierra Leone new sets of crutches and spare ferrules, and hopefully some additional funding in order for them to organise transport between cities for them to play competitive matches between the various teams. Long term I’d would like to be able to provide funding for prosthetics for those players that need them. I’ve already been approached by a company that produces them who are willing to help if we can secure funding. The fundraiser can be found at https://gofund.me/a5b59cef