Sometimes the toughest opponents are the ones you can't see. You will hardly find a truer statement when it comes to mental health issues.

The team at AMV BBDO saw an opportunity to talk about mental health and break the stigma through sport. It all stemmed from a simple fact: if rich, successful and seemingly healthy superstars could feel lonely, depressed or suicidal, anyone could.

The team saw the story of Tyson Fury, who had come close to suicide and had been very open about his mental health, as the perfect chance to send a powerful message about fighting such a frightening opponent as mental health issues. Just like that, the campaign idea was born.

The team had to face a number of challenges to see it come true, however, which were all cleverly overcome by the folks at AMV BBDO. Today we are getting Behind the Idea with Joe Smith, Strategy Partner at AMV BBDO, Dan Russell, Managing Director at Seven Stones, and Zac Ellis, Creative Director, to learn more about the inspiring campaign below.

We saw an opportunity to use sport to raise awareness and understanding of mental health. In 2018, sports stars were starting to speak about their mental health struggles and we thought there was a powerful story to tell, to influence men in particular.

75% of suicides in the UK are male and suicide is the biggest killer of men under 45, yet men are often reluctant to talk about how they are feeling. If rich, successful, and seemingly healthy superstars could feel lonely, depressed or suicidal, anyone could. We felt their experiences could reduce the stigma around mental health and encourage others to seek help from an organisation like CALM.

It was one of those ideas that arrived fully formed. Tyson Fury was someone who had come close to suicide and had been very open about his mental health. In his high-profile fight with Deontay Wilder a few weeks before Christmas, he was knocked down in the final round, but rose from the canvas to fight on and draw the contest. The analogy was disarmingly simple. He was fighting physical opponents and internal ones. Both tried to defeat him, but neither could.

We wanted to visualise how mental health feels and to use Tyson Fury’s story to make a broader point. The idea was to position mental health as ‘The Invisible Opponent’, which would be achieved by removing Wilder (Fury’s opponent) from the footage of his recent fight. It took another week or so to get the messaging right. An insightful, memorable truth that made sense of what people were seeing: “Sometimes the toughest opponents are the ones you can’t see.”

There were multiple challenges with this project. We knew we had something powerful with the initial idea, but CALM wasn’t a client of ours, we didn’t have access to the fight footage, and we couldn’t get through to Tyson Fury’s team.

But all of those obstacles were overcome, and we were lucky to have many talented and busy people donate their time for the cause. The biggest challenge was in the craft. Removing athletes from sporting footage with thousands of spectators has not been done before to this level. It was painstaking work.

When we hadn’t heard back from Tyson Fury about approval to use the footage, we had this plan of going to a book signing he was doing in central London in 2019 to try and meet him and talk to him about it. The queue was about a mile long and we realised we would have looked like amateurs trying to get him to be in our ad. So, we went for a pub lunch instead, to think of a better plan! 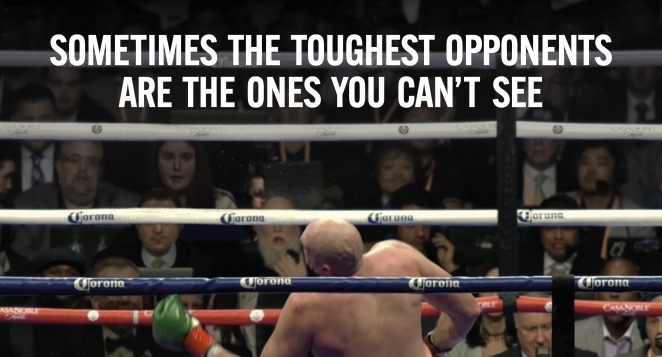 The main message is a hugely important one: you don’t have to fight your mental health alone. The film, social and outdoor ads all feature CALM’s phone number, which is free, anonymous, and confidential. It wasn’t just about driving calls. We wanted to increase awareness and understanding of the work CALM does amongst a broad audience, so it is front of mind whenever they or someone they know might need support.

It was unusual to work on a 60 second film that didn’t involve a shoot. All of the footage already existed, and the burden was on editing and post-production to craft the story. This obviously meant the campaign was cheaper to produce, which made it viable for a charity like CALM. But it did mean that we had to look through hundreds of hours of fight footage from different angles to find the few shots we needed.

In total, about 2 and a half years. But a good chunk of that time was taken up accessing the relevant parties and getting licensing and legals approved. Luckily Tyson Fury and his team were really supportive of the idea and the cause when we finally got to speak to them. The actual concept didn’t really change over this time, which is remarkable. But some of the finishing touches, like the music and sound design, really lifted the film in the final stage of production.

There was an immediate impact when the campaign went live, from website visits and calls to social media conversations about CALM and the campaign’s message. In the longer-term, we hope it raises awareness of the fantastic work CALM does. In the UK, 125 people die by suicide every week – with 75% of those deaths being male. It doesn’t have to be that way. Hopefully this campaign has played a role in challenging the stigma that prevents people from seeking the help they need.