Licensed characters are colourful, instantly recognisable and often loved by hundreds of thousands of consumers around the world.

Yet, when it comes to licensed characters, Adland is plagued with a can't do attitude particularly common among top advertising executives, due to the misconception that licensed characters are incredibly difficult to use. In an attempt to dispel that myth, licensing agent company Born Licensing crafted their first creative campaign aimed directly at other creatives, showcasing the powers of licensed characters in advertising campaigns.

The result, as you can see below, is incredibly catchy, colourful and approachable. Today we are getting Behind the Idea following a chat with David Born, Director at Born Licensing, to learn more about this beautiful and incredibly colourful campaign. 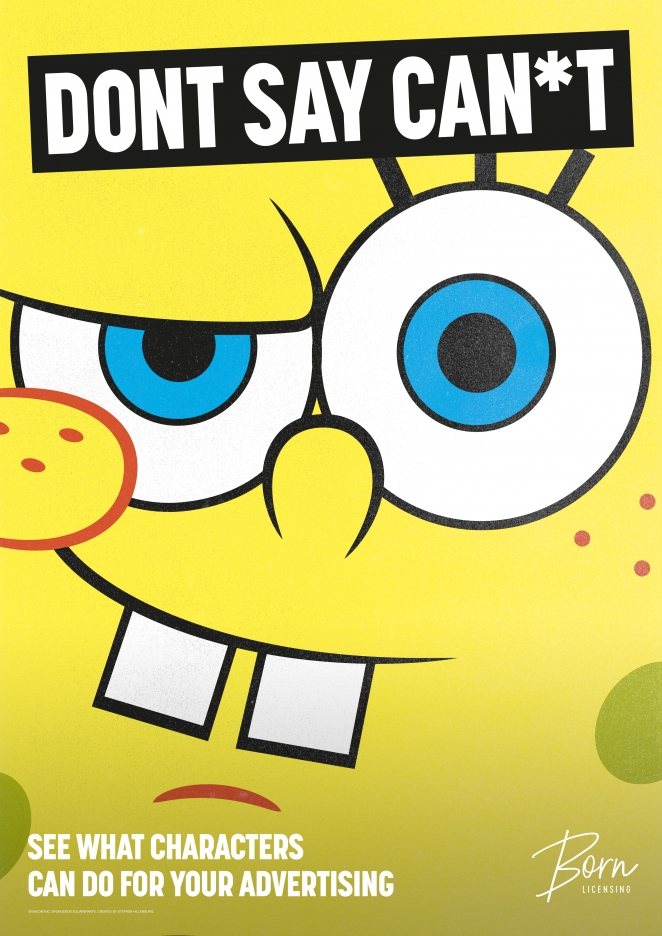 As experts in licensing fictional characters for creative campaigns, Born Licensing have heard first-hand how frustrated creatives feel when their scripts with characters get pulled because of feedback that it will be too expensive or too difficult. Who wouldn’t be disappointed at having the chance to work with a childhood hero taken away from them?

Through a series of interviews and questionnaires, we discovered that UK creatives want to use characters more in their work but 100% of those who had worked on campaigns with characters or clips had experienced the IP not going ahead due to perceived challenges of licensing.

Our brief was to come up with a campaign that would dispel the myth that character licensing is too difficult, and to in turn encourage and inspire more creatives to use fictional characters in their work.

We naturally wanted to put fictional characters front and centre of the campaign, so within the brief we provided guidance on which animated characters would be feasible to use.

We hired creative team Sander Vos and William Grave (www.sanderandwill.com) for the job. As Sander explains, “It’s a unique challenge to come up with creative which is targeting other creatives. That’s why we felt that this campaign needed something bold and impactful”. Their position as the target audience meant that they were able to really pinpoint the messaging and come up with a range of strong concepts that they knew creatives would respond to. After the initial pitch we presented their ideas to the Rights Holders we represent including MGM, ViacomCBS, Universal and Hasbro, eventually landing on seven characters for the Don’t Say Can*t concept. 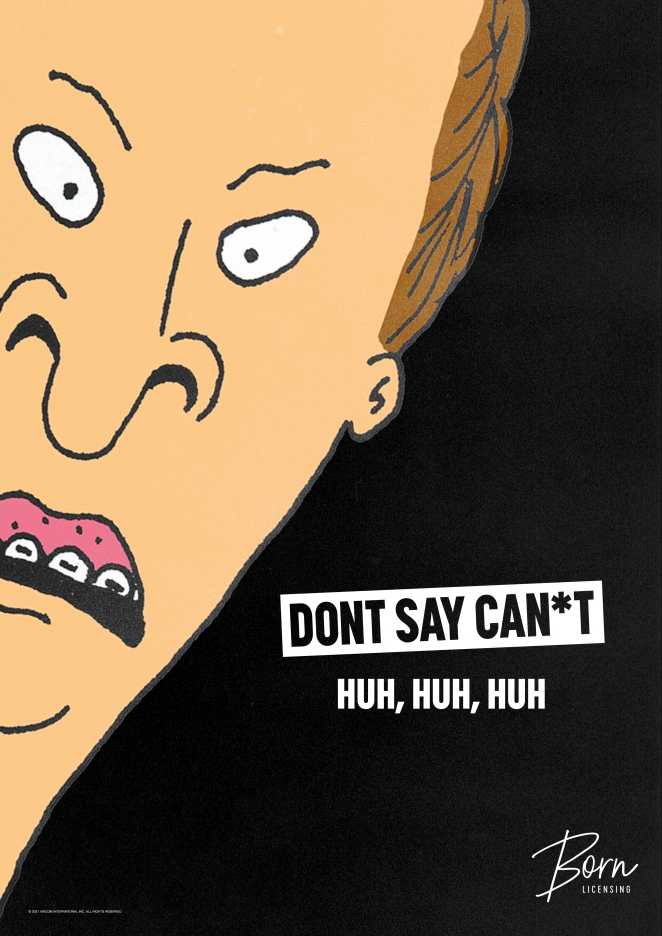 As a Senior Creative, William Grave is well accustomed to the can’t-do attitude that can exist in agency meetings: “After 10 years in this industry, Sander and I have probably heard a thousand ‘can’ts’ in meetings over the years before an idea is even given the chance to flourish.”

As licensing agents for some of the biggest studios in the world, we were able to enlist a stellar cast to deliver the message, including SpongeBob SquarePants, Garfield, Grumpy Bear from the Care Bears, 90s icon Daria, a Ninja Turtle, Beavis from Beavis and Butthead and Mr. Grumpy from Mr. Men Little Miss.

We loved the simplicity of the messaging as well as the tongue-in-cheek play on words that positions ‘can’t’ as the new C-word.  Our designer, Xavier Seger, ran with this concept embedding Don’t Say Can*t into a stamp design inspired by the black and white ‘PARENTAL ADVISOR EXPLICIT CONTENT’ label.

For the overall look, Sander and William took inspiration from bold magazine covers, and empowering sports campaigns, that often feature celebrities or sports stars. We loved this angle as we’ve always felt that fictional characters are overlooked and underutilized when compared with celebrities in advertising.

For the campaign it was important that the messaging used real life examples of common negative feedback heard in agency meetings so that creatives would be able to really relate. William and Sander drew on their experience to come up with a list of frustrating negative idioms they often hear, such as “that’s a second year idea” or “it’s too outside the box”. Equally important was that the characters spoke in their own voices. William writes, “We wanted to be authentic to the individual characters’ tone of voice and we had to be to get it passed by the rights holders.”

The campaign features seven very different fictional characters. It was important that there was some uniformity in the campaign to convey a sense of unity amongst these characters all rallying for the same goal. The creatives needed assets of each character looking directly ‘at the camera’ to really grab the viewers’ attention. They also needed to have the right expression to convey the inspiring, empowering, and defiant tone of the campaign. Surprisingly, one of the main challenges was finding existing assets that met this quite specific criteria. As licensing agents for studios such as Nickelodeon, we have access to thousands of official assets, but it was still a challenge to find the perfect pose for each character. 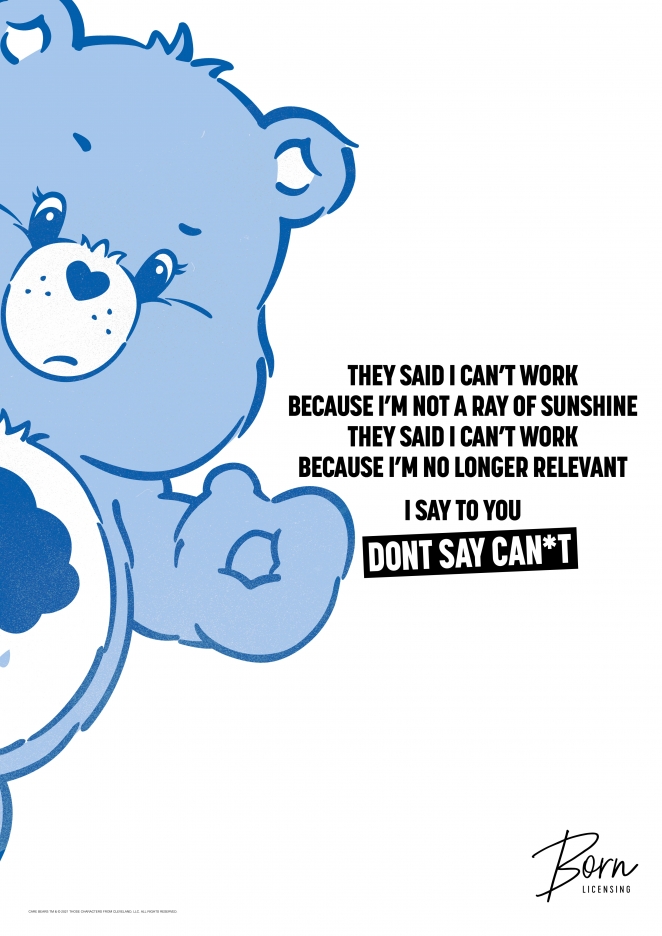 William spoke of having to reconnect with characters from his childhood like Care Bears, watching old episodes to help get into character. “Working with 90s classic Daria was an amazing nostalgic blast from the past. Seeing also the likes of a Grumpy Care Bear and SpongeBob fronting a ‘to the naysayers’ Nike-esque campaign was a lot of fun to develop, empowering them after being left out on the sidelines.”

Quite simply, we want to champion creativity and challenge the can’t-do attitude that is common when ideas with fictional characters are pitched. The problem is that often producers don’t know where to even start when presented with a script featuring a fictional character. Fictional characters are 13.4 times less likely to appear in UK advertising than celebrities,[1] so it’s not surprising that producers tend to have less experience in this very niche area. As a result, adland naturally tends to approach character licensing with a lot of hesitancy, if not actively avoiding it altogether. They fear that the process will be too complicated, too out of the box, or too expensive. Not so.

We’ve made ‘impossible’ ideas happen and want adland to start coming to us with more out-there ideas using fictional characters. 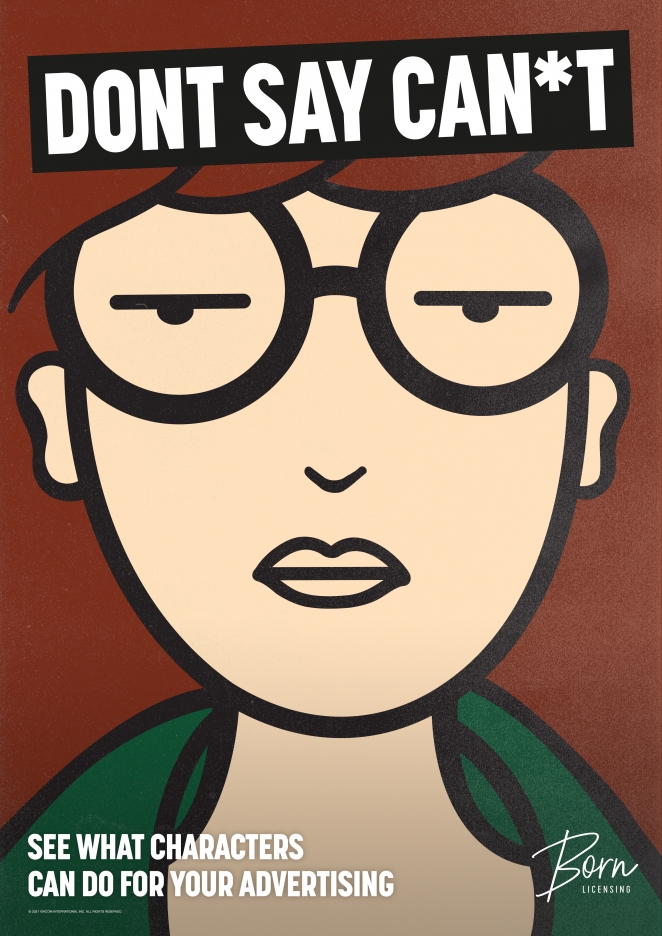 This is the first time you will have seen these characters in this way – looking directly at the ‘camera’ with cropped close-up shots. Rights holders can be sensitive about cropping their artwork. A lot of the characters we worked with for this campaign have huge consumer product programmes with strict styleguides on how you can and cannot use assets. Heavy cropping is often a no-go so we had to make sure the rights holders were on board with the concept and get them comfortable with the executions. It was important that these very recognisable characters were seen in a new light.  As Sander explains, “Through the use of cropping and bold typography we aimed to display these icons in a motivational and unexpected manner to inspire creatives to rally against those ‘cants’.”

Ultimately, we hope the campaign will raise the profile of character licensing in advertising. We want agencies and clients to think twice next time they dismiss an idea with a character as being too difficult, too expensive, too much of a wild card idea or too ambitious. We want them embrace bold ideas with characters instead of shying away from them.