Louis Armstrong's What a Wonderful World is a recurring tune in creative work around the globe, and for good reason. It carries enormous poetic and symbolic power, which once again is masterfully demonstrated in the campaign by Hell Yeah! and Olio below.

If even one person stopped to think about the amount of household waste they produce, impact over a lifetime would be enormous. There is certainly a household waste crisis adding to the climate emergency, and the team at Hell Yeah! chose to tackle the topic in a rather unique way: having a group of children sing Armstrong's masterpiece against a landfill backdrop.

The agency purposely decided to move away from cliched charity ads, often relying on stock-like footage of raging forest fires and sad-looking animals. The result is a touching 30" ad with supporting OOH visuals, raising awareness of the household waste crisis and urging customers to adopt Olio as a solution to drive behaviour change.

Today we are getting Behind the Idea with Dulcie Cowling, Head of Creative, and Fiona White, Creative Director at Hell Yeah!, to learn more about the beautiful and powerful campaign below.

Our brief was threefold:

Fiona: Tackling the initial brief was tricky - this wasn’t a standard app explainer campaign to drive downloads. We had a huge, macro problem on our hands (the climate emergency) that we needed to connect to another, smaller but still very macro issue and contributor to the climate emergency (the waste crisis), finally presenting OLIO as part of the solution. That was a lot to get across in a 30” ad. 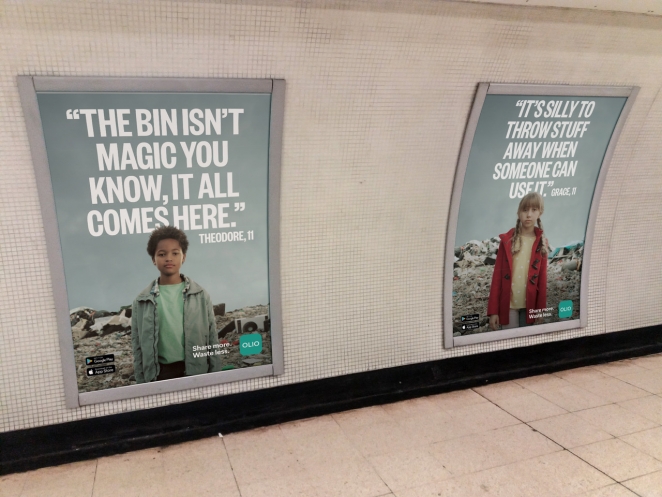 Fiona: The idea started with the song. When Louis first sang those lyrics in 1967 the future looked brighter. Humanity on the whole was pretty unaware of the devastating impact industry and the burgeoning population was having on the planet.

Hearing it in the context of today, the song seemed at stark odds with the reality of a planet in peril. Instead of a wonderful world, were we instead rocketing towards a wonderful waste? The trick from there was avoiding making something that looked like a cliched charity ad, relying on stock-like footage of raging forest fires and sad looking animals.

We realised that what we needed to do was show people the shocking truth in the simplest, most emotive way possible. Which is how we got to real British kids, singing What a Wonderful World, on an actual landfill site. We had this vision of a darker Coke Hilltop, holding up an eerie mirror to the romanticised version of consumption we see in a lot of advertising – so much of which ultimately ends up in landfill.

Dulcie: In a too-weird-for-real-life coincidence, during the time we were developing this concept, my eldest son Blake had been learning ‘What a Wonderful World’ for a school assembly. Hearing him, and eventually seeing him and his classmates sing it, solidified in my mind that this message HAD to be sung by children.

Adults warning adults about the climate crisis, seems to be so commonplace that it has almost lost its potency, and the idea of children telling us not to waste what will ultimately be their world seems all the more emotive and apt. 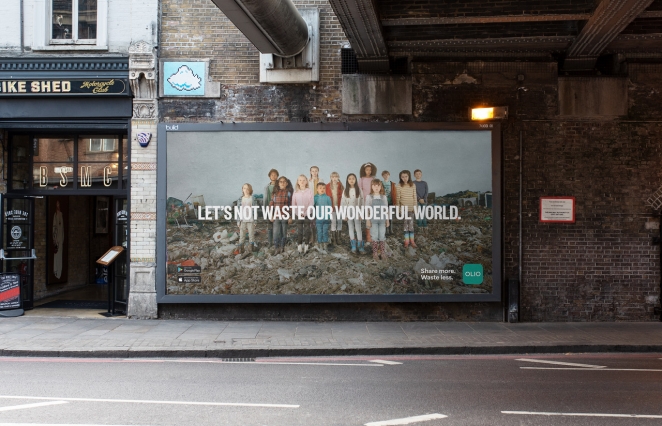 Dulcie: We already try and make our productions as sustainable as possible, and working on a campaign like this, for a brand like Olio, renewed our determination to create as little waste as possible during the process. Crew were sourced locally where possible, all of the team were Ad Green trained and props were borrowed or sourced from existing waste.

Fiona: Finding a landfill site! We had to call over 200 sites in the UK to find just one in Swansea that would let us film there. Understandably most weren’t keen on us giving the whole of the UK a backstage pass to where our waste actually goes, and the shocking scale of it all. Luckily we found an amazing one in Wales who were as keen on the urgency of the message as we were.

Dulcie: Our intention was for this film to be as real and raw as possible, therefore not much trickery such as VFX was used at all. Our original wish was to use film to heighten the sense of realness, but unfortunately practical restrictions limited us to digital.

The practicalities of shooting on a landfill site also meant that we had to use a drone instead of a crane, but through the whole process we kept an open mind and worked hard with what we had. The purity of the idea was what mattered the most to us throughout.

Fiona: There were three rounds to the Sky Zero Footprint competition, and the second saw those brands that were shortlisted present their creative via video call to the judging panel, among them John Hegarty.

Now the panel’s collective feedback from the first round had been that we needed to explain more about the OLIO app, so we’d amended a now very jampacked 30” script to finish in the home and show OLIO being used (rather than finishing with an emotional musical bang on landfill).

Hegarty promptly said we should really have ended at the landfill, to which we explained that we were trying to address their feedback. His response? “And this is why you should trust your instincts and never listen to clients!”

Dulcie: What we do as individuals when it comes to waste matters. By sharing more and wasting less, we can create a better future for our children and the planet. Let’s not waste our wonderful world.

Fiona: We want to help people reduce waste, and we believe that OLIO has an important role to play here. If we can notably increase the number of OLIO users in the UK via their first ever brand campaign, and start to shift behaviours around consumption and household waste, we can have an untold impact in the fight against the climate emergency.

Dulcie: Even if it were only to make one person think about the amount of crap they needlessly waste, the impact over a lifetime would be huge.