How HarrimanSteel invited the industry to "fly its flag" - #BehindTheIdea

To say that 2020 was a year of tumult is easily an understatement. With lockdowns, BLM protests and increasing awareness about climate change, it truly was an incredible start of the decade and one during which brands learned how to embrace purpose further.

To bring some fun, optimism and positivity on the stage, HarrimanSteel came up with an interesting crowdsourced project to promote positive change in these turbulent times. Fly Your Flag invited the global design community to design their own flag for a cause, belief or change they would love to see in the world, bringing the industry together with a simple idea: to create a discourse about what matters to each individual, personally.

Today we are getting Behind the Idea thanks to a chat with HarrimanSteel Executive Creative Director and Co-founder Julian Harriman-Dickinson. 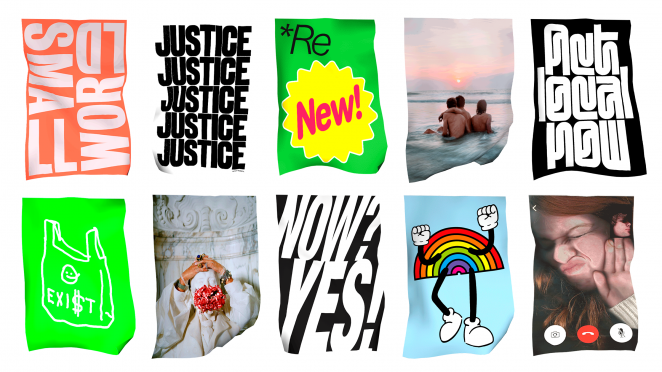 Fly your Flag is a self-initiated HarrimanSteel project in response to the unprecedented and uncertain times we have all found ourselves living in. 2020 has thrown the world into a state of flux. A turbulent year of Coronavirus, BLM protests, and increasing concern over climate change and social inequality has sparked a global rallying cry to acknowledge and embrace new priorities and new possibilities.

As an agency, the first few months of lockdown were tough – mentally, emotionally and financially – but there were positives so we decided to set the wheels in motion for a project that would focus on the positives and could hopefully lift up both ourselves and others. We also wanted to support and celebrate our brilliant creative community, many of whom found themselves sitting at home while jobs were shelved, and income dwindled. We wanted to spread a message of hope during these unsettled times, and for people to consider that this could be the greatest opportunity for positive change that we’ve seen in our lifetime.

As this is a self initiated project, it didn’t happen in the traditional sense, where a normal project would have a briefing or a kick-off moment. This materialised over the course of 2-3 months at the beginning of lockdown, there was a collective sense and feeling that we needed to respond and try to articulate what we were all feeling and allow others to have a voice to try and articulate what was unfolding before us all in real-time. Little by little, one conversation led to another and the project started to take shape. The process was quite organic and democratic in its origin.

On 28 October 2020, HarrimanSteel launched ‘Fly Your Flag’, an independent, not-for-profit initiative calling on anyone, anywhere to to design a flag which represents their hopes for a reimagined future, and in the process, generate a far-reaching dialogue that encourages people to think critically about the changes they want to see in the world and in society post-Covid, and post-2020. Flags are symbolic by their very nature, they represent ideologies, belonging, pride and national identities. We wanted people to express their hopes and wishes through this simple, graphic medium. With the hope of creating a new standard. 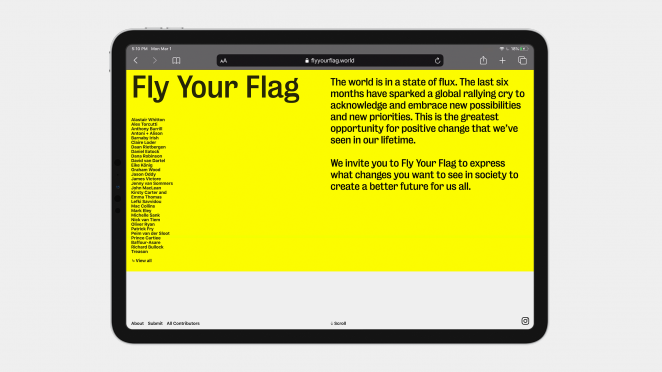 The biggest challenge was being respectful of people's time, so asking them to do something that they could stand behind but would not require too much of a big commitment, as we were very cognizant of the fact that they probably had more pressing matters at hand.

The diversity of the responses, from the irreverent to the intensely personal. With broad subject matters such as, racial equality, sustainability, community, shopping local, political satire to the importance of nature.

Why flags? Flags have been used to represent messages of protest, community, hope and pride for centuries. Flags show what we stand for. The symbolism of a flag as a quiet but powerful expression of identity, unity, and rebellion resounded with us, and offered contributors a (literally) blank canvas to work with. We encouraged contributors to express their vision using whatever medium they wanted to – photography, poetry, collage, illustration, etc. 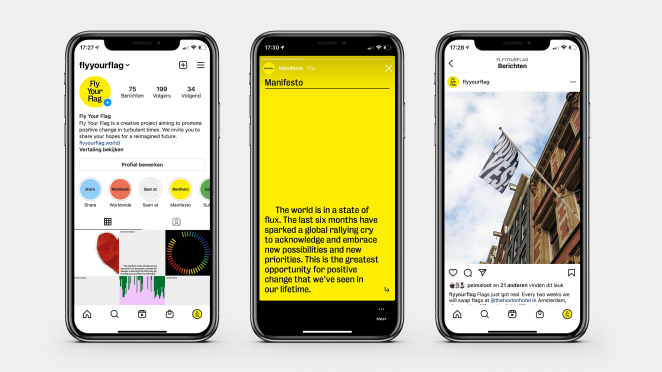 As well as appearing on our Fly Your Flag website (​www.flyyourflag.world​) and Instagram page (@flyyourflag), a  selection of designs have also been produced as full-size flags and hung outside ​The Hoxton​, Amsterdam. The first two flags were raised on the 28​th​ October to coincide with the launch, and they are being changed every two weeks until the end of the year, showcasing a variety of different designs and topics.

The initiative was kick-started with submissions from giants of the design world, including Eike König, James Victore, Antoni + Alison, Dana Robinson, Anthony Burrill and Mac Collins, to name but a few. Then, on the 28 October, the doors were thrown open to members of the public around the world.

Our aim was to create a discourse around what really matters to each of us individually. Times of crisis helps bring into focus what is important to us as individuals, we wanted to give people a platform to share their learnings and points of view from this moment of introspection. From a relatively small ask of our contributors, we have created a visually impactful project with a powerful message for change. The subject matter of the flags received so far covers everything from social inequality, environmental reform and the importance of buying local, to anti-consumerism, multiculturalism and the sanctity of mental health. We have received flags from 15 countries around the world from as far afield as Ghana, Canada, Australia and South Africa. In the first month after launching, our submissions grew by 80%, and we continue to receive new submissions from both artists and members of the public regularly, so there’s no sign of the initiative slowing down! 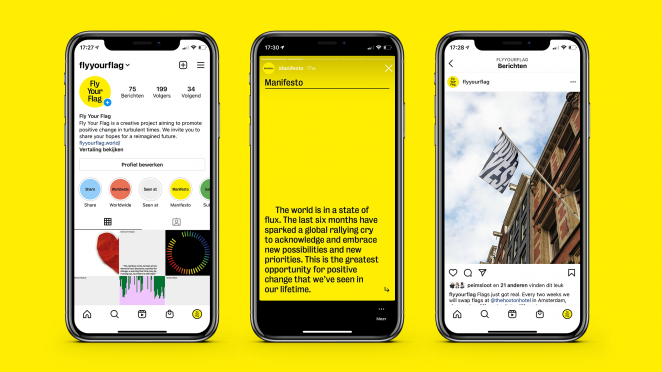 We would primarily like to thank all of the contributors who have taken the time to share their wishes and hopes for the future through the medium of a flag.