Traditionally, theatre advertising campaigns have been OOH. So what do you do when a pandemic forces theatres to close and makes outdoor advertising temporarily out of fashion?

Dewynters' answer was to create a new trailer for a unique campaign that was hardly before attempted in theatre. The cast of award-winning show The Mousetrap is seen on screen everywhere except against the play's set, to generate interest and a sense of timelessness for the viewer. In truth, everything and anything that keeps bringing the audiences back to the theatre for The Mousetrap is a burning sense of curiosity, a simple question: who dunnit?

Around this question rotates the entire trailer, tapping into a fear of missing out that pushes to bring people back in theatres. A rather unique approach indeed, and one that we can only hope will keep The Mousetrap at the St. Martin's Theatre for a long time still. Today we are getting Behind the Idea following a chat with Copy Director Jimmy McNicholas, to learn more about this innovative campaign below.

When The Mousetrap was forced to close temporarily during the pandemic, the show’s producer felt it was a smart time to refresh the iconic theatre brand. The brief was to create a new campaign that felt stylish, mysterious and classic with a hint of fun. The ultimate goal was to inject a sense of energy and excitement to the brand so that upon re-opening, the public would take notice of it in a new way.

While some team members had seen the production previously, some had not – and couldn’t go see it because the show was on hiatus. This actually created a perfect scenario for brainstorming, because the simple act of reading a script can sometimes unlock a fresh perspective on a play. We were also able to visit the theatre a few times, which seriously inspired us.

We settled on the phrase “evolution, not revolution” as our guardrail. We wanted a visual anchor that felt both familiar and new. We found it in the huge neon sign outside the theatre, which has proudly displayed the show’s title for decades.  We decided to re-create that sign as a 3D object, which would become our new logo. That sign then inspired a new mascot – a “neon thumbprint mouse” with a question mark hidden in its ear. The idea of a “question” inspired our new trailer, which placed the characters just about everywhere in the theatre except against the play’s set. This helped create a sense of timelessness, and allowed us to position the play as more than just what’s happening onstage on any given night – it’s a landmark event that’s kept people coming to this beautiful building for decades to answer one burning question…

From a design perspective, the biggest challenge was getting the mouse just right. You’d be surprised how difficult it is to make a “thumbprint mouse” out of neon tubing! The biggest challenge with the trailer was lighting. Since we weren’t shooting onstage, we didn’t use the classic trick of using stage lights as our base. We built each lighting setup from scratch for a uniform, cinematic look. The idea of using neon tubing to illuminate doorways – a direct inspiration from our logo – was trickiest of all. In the end, the lighting choices helped to make the campaign feel more premium and contemporary.

There’s one shot in the trailer we refer to as the “magic shot,” when Sgt. Trotter passes by the window and his shadow transforms into his reflection. This was one of those happy accidents – we spotted it during a test shoot, and discovered it was due to how the light was interacting with some mesh on the window. We took a screenshot and added it to the storyboard - a great reminder that sometimes the best moments in an ad can’t be planned. 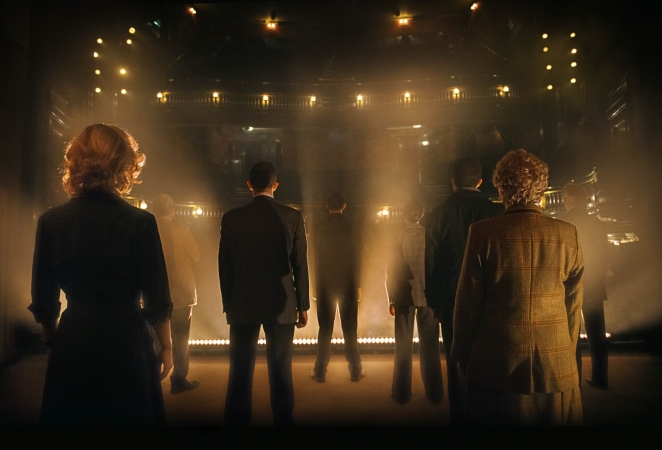 Since the question of “whodunnit” is central to the entire genre for which this play serves as a cornerstone, we wanted to lean into the phrase. We came up with “HAVE YOUDUNNIT?” as a way to add a sense of fun and whimsy, and to engage directly with the public by inspiring a bit of FOMO. We’re pushing the use of #IDunnit on social. It’s all inspired by the idea of this play being a “rite of passage” for theatregoers. Our secondary message is “DON’T JUST SEE IT. SOLVE IT.” The lure of solving a mystery in real time and then swearing yourself to secrecy forever is why you might ultimately choose The Mousetrap over something else.

The tiny “snow room” featured in the trailer is located backstage right, and has been in use since 1974 to cover actors in a dusting of snow just before their entrances.

The brand rollout began at the 4-month mark. The trailer hit at the 9-month mark. Over a year since we began, the campaign development is ongoing, and there’s more to come.