Dreams of 5G with Orange, Publicis and Apple - #BehindTheIdea

With a long-time partnership with Apple, Orange was one of the main carriers in France working to promote 5G with the launch of iPhone 12. Having such a solid relationship in place, it would have been easy for the Orange brand and Publicis Conseil to focus on the technological capabilities of the new iPhone, and how a 5G networks makes for an incredibly fast experience on any device. Too easy, in fact.

Orange approached Publicis with a powerful brief: to show the human side behind the 5G launch, demonstrating how Orange cares about its customers and why it has always catered for them. And so the spot below takes a slightly different approach, and an incredibly effective one at that: connecting people through the power of the new iPhone.

Today we are getting Behind the Idea to learn more about the amazing spot below, and how Publicis Conseil was able to make it a reality in less than 4 months.

In the middle of the global battle about the 5G launch, the brief Orange gave to us was to focus on the human side of it. What does a great network enable us to share? Orange is also celebrating here its 5G launch in association with its long-time partner Apple. So both the 5G network and new iPhone 12 were the pillars of the brief.

As always with Apple, before the official launch of the new iPhone, everything is pretty secret. So the main focus at first was to find the iPhone 12 innovation that can match with the 5G network in order to build a great story to talk about the moments we share. The amazing video capacities of the new iPhone 12 has been picked during the creative process.

Orange’s DNA is all about stories between people. While a lot of brands jump into the sometimes caricatural emotional side, Orange has something different. Emotions are important for sure, but the brand also enable itself to exit the raw reality and to dive into mental projections, metaphors…etc. A true playground for entertainment and “magic” that join the one from its partner: Apple.

The idea is paying tribute to Orange’s entertainment DNA: A kid stands up for the first time to make his first steps. The moment is immortalized by his father thanks to his iPhone 12 Pro and of course proudly sent to the grandma via the 5G network. That’s for the reality. And now the entertainment layer: Instead of focusing on a video sent and multiple screens, we decided it was way more interesting to imagine the first steps of our kid all the way to his grandma, and to build a film in which the kid will go on an epic journey through the city. That’s how we’ve dramatized the feeling of the grandma, who attends her grandson first steps as if she was with him. Promoting here both the 5G by Orange and the crazy video definition of iPhone 12.

The production process was short, with very few days of preparation. The main challenges were to shoot enough scenes & locations so the idea works knowing we only had 2 days of shooting. Also, the cast of our hero baby was essential, as we all know how difficult it can be to shoot with children that young. So imagine finding the one who will spontaneously walk by himself though a big city… our little hero was great and the production company Division manages to make a lot of scenes fits in a very tight schedule. 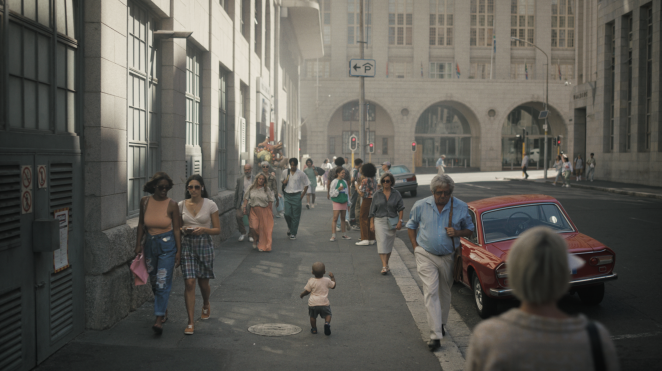 We needed to cast fishes for one of the scene (formidable job, isn’t it… ;) but a fishermen’s strike has just hit the aera we where shooting. So there were barely no more fishes in town…

We probably have to mention the music here… It’s a rare track from Vidhaata, a boolywood film from 1982. It’s called Udi Baba and the singer is Asha Bhosle. Proposed by the creatives and instantly loved by the brand Orange.

Something like 4 months. But way less between the idea and the shoot.

We hope it gonna continue to seal Orange partnership with Apple and inspire them to make films with more and more creatives ambitions together. We will also be happy to develop always more entertaining commercials for our client Orange.