How do you pull off an iconic ad feel with limited time and an ambitious idea? The people at production company Anattic will know more about that after crafting the splendid spot with Daniel Ricciardo below.

To kick off a collaboration between the popular F1 superstar and wine brand St Hugo, Anattic focused on beautiful locations and great production value to deliver a hilarious, authentic and lovely ad, promoting the limited edition wine line DR3.

Today we are getting Behind the Idea following a chat with Co-Director James Copson, to learn more about the project below.

Australian creative agency Emotive asked us to create a spot starring Formula 1 superstar Daniel Ricciardo, for an Australian wine brand called St Hugo. The ad needed to capture authentic Daniel, his fun and smiley charm, to promote the launch of a wine collaboration between them - titled DR3. The emphasis was “authentically Dan” to swerve typical celebrity endorsement cliche’s and present a piece of content that truly speaks to Daniel’s character, personality and the passion that has gone into the project.

We immediately clicked with the lead producer and the creative director from the agency and felt their initial concept sounded great. Based on our previous work with DR, we were able to have a couple of discussions to refine the creative slightly and add our own ideas and direction in to the mix. We quickly got to a place everyone was happy with and the project, script and shoot style. 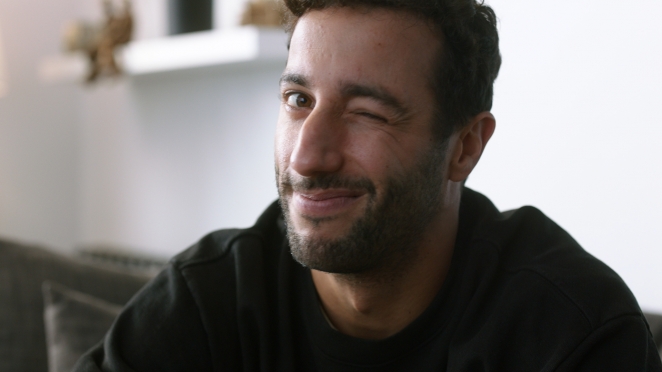 We have worked with DR a few times now and really enjoy each shoot. Our experience working with him means we have a bit of an understanding of what does and doesn’t work well on set, so we were able to inject this knowledge into the idea. DR is extremely easy to work with, relaxed and genuine and we always manage to capture priceless moments with him that you just can’t write. We wanted to build wiggle room in the script to allow for this flexibility and let the talent bring the whole thing to life.  This way of shooting and working means the real passion and real personality shines through, which lent itself really well to the premise of ‘authentically Dan’

The biggest challenge was time. It was a very ambitious idea, concept and plan to pull off in a short time frame. We had a number of scenes to capture on location, which required set design and art direction, not to mention dolly and track, lighting and camera moves. Our strategy was to create mini sets for us to quickly move camera to and to minimise disruption and delay during the day. We have a really strong, talented crew who always go the extra mile. They really pulled it out of the bag. We also had the challenge of the client being based over in Australia, so we created a system to livestream the shoot to them and they would interact and feedback their thoughts and suggestions during the shoot. (A late night for them). The client was able to see through the lens, on the other side of the world and watch each take and scene unfold. It was really quite magic. 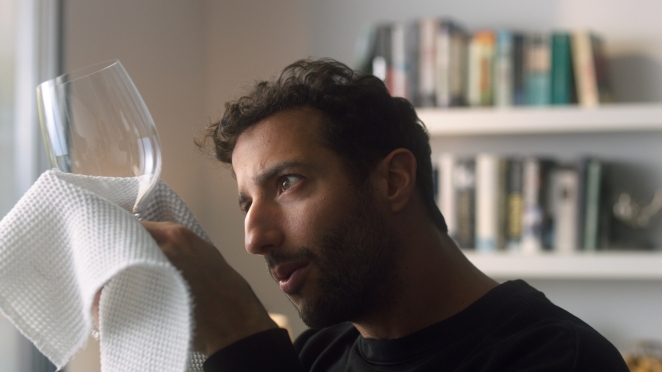 We all agreed and decided on a location based on the style of the property. It had a really cool looking wine cellar and a really nice living space with a great fireplace. We selected the location, particularly because of the black wall paint around the fireplace which was the right, moody vibe for that scene. A couple of days before the shoot, we were told that the owner had painted the whole room white and a virtual RECCE of the wine room (over zoom) showed the wine cellar was tiny. We had to think fast and replan a scene and our amazing Art director Milda managed to find some vinyl wallpaper and essentially undo the newly painted living room. After we packed down, it looked like we’d never been there. What a saviour!

The main message was to demonstrate that Daniel Ricciardo teamed up with a prestigious wine company and that he only takes on partnerships he believes in and is passionate about. This was a really important message for the St Hugo brand because it gave the partnership credibility and authenticity. 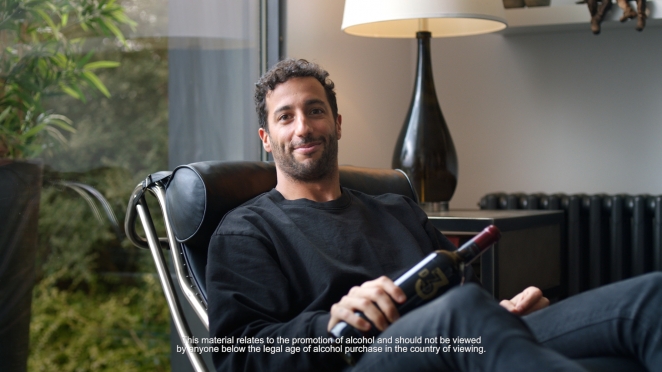 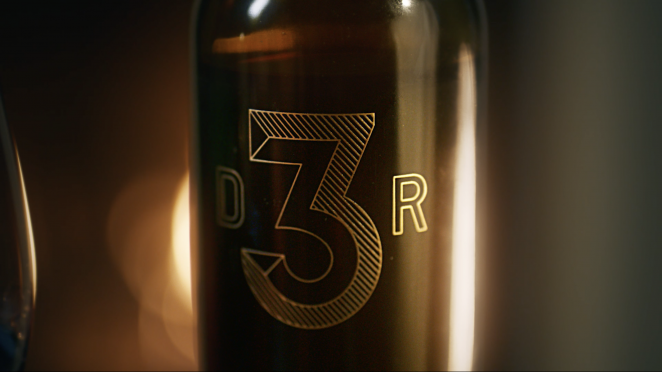 They actually sold out of the product super quick after launch. Hopefully it sparks new ideas and collaborations and maybe future DR3 / St Hugo collabs?