Bringing some Genuine Draught to the table - #BehindTheIdea

In this age of overwhelming noise, one of the most common and popular buzzwords you can hear is disruption. All brands aim to cut through the noise with some disruptive move or campaign – but how many actually achieve that?

When BrandOpus was approached by Genuine Miller Draft to relaunch the brand in the US, they knew straight away that change was needed. It takes some expertise to relaunch what used to be one of the biggest beer brands in the States, and most of all, it takes some confidence. Clearly, BrandOpus isn't lacking in any of those.

Today we are getting Behind the Idea with US Business Director Alice Waterman to take a deeper look at the powerful Genuine Miller Draft rebrand by the folks at BrandOpus. 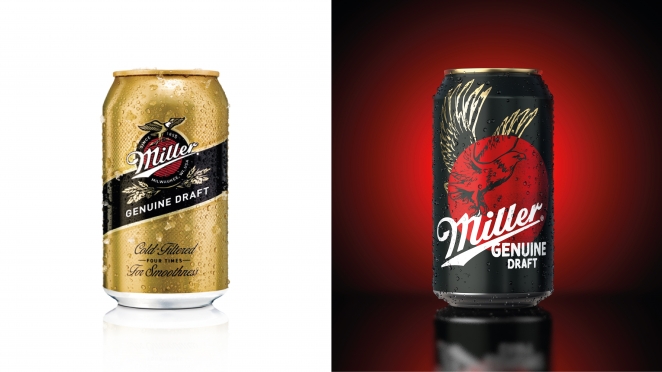 Back in the early ‘90s, Miller Genuine Draft (MGD) was one of the biggest beer brands in the US. However, faced with new competitors and changing cultural and consumer landscapes, the brand struggled to retain relevance and clarity around what it stood for in recent years.

Molson Coors wanted to reinvigorate MGD to boost consideration within their core audience, as well as increase resonance and grow market share with a wider audience in the longer term.

Their brief to us was clear – change was needed. It had to be significant enough to disrupt beer consumers at the shelf and drive reappraisal, as well as give the brand meaning over and above product attributes of quality and taste.

We all instantly connected over the idea of ‘Genuine-ness’ that was already inbuilt within the brand name – it turned out that inspiration was sitting right in front of us!

Our instincts were supported by pre-existing brand research which portrayed the MGD moment as one of personal depth and authenticity. There was a synergy between this and the nature of the product – the genuine taste of draft-style lager.

We all chatted and ideated around what ‘Genuine-ness’ truly meant and established it was rich territory for further exploration.

To continue on the journey, we commissioned semiotic research into the emergent codes of ‘Genuine-ness’ to understand more about how this shows up in culture today, so we could harness it in a way that would be relevant for MGD’s consumers long into the future.

It was really our intuition that led us to reframe the current visual equities, as we believed they could best symbolise the genuine narrative we were trying to convey. As we delved deeper into existing brand and consumer research, we found that our initial instinct was right. The MGD moment is one of realness, whether alone or with a friend – a latent sense of honesty, independence and integrity to the brand exists.

These are values that existing consumers held in high regard but which were also relevant to our wider target audience – in a world that can perhaps feel contrived or shallow, people are looking to express a deeper side to themselves and acknowledge that in others.

It was this idea that we decided to capture at the heart of the brand – Miller Genuine Draft brings character to every moment. When you enjoy an MGD you are invited to discover the depths within – both personal and product.

This narrative also has a dynamism which felt right given that MGD is a draft-style lager - not a heavy or dark beer. It was this combination of energy and authenticity that we looked to bring to the forefront of the brand’s new visual identity and its tone of voice.

Building on our instinct and the learnings from the semiotic analysis, we retained the eagle not only as a memory structure but also as a symbol of American character and confidence. In its previous execution it felt too static and heraldic, so we gave it life through a more powerful and expressive execution. We hero-ed it within the design to elevate it as a core symbol and asset for the brand as it lands on the Miller wordmark – creating a connection to the brand and a sense of being grounded.

To tap into the codes of ‘Genuine-ness’ we also shifted away from elaborate and ornamental styling to a simpler, ‘nothing-to-hide’ brand aesthetic. The gold became an accent rather than the lead colour and we retained the red and black memory structures to ensure recognisability. The entire team at Miller were great from the get-go – they saw the opportunity for the brand and had the ambition and guts to explore routes that pushed boundaries. It made for a really collaborative process since the collective vision was aligned and there was an energy and excitement behind it. Whilst it took time – including rounds of research to sense check and learn from along the way – it was honestly one of the smoothest projects we’ve undertaken. Testament to that is that the launched rebrand looks fairly close to the first-round concept presented.

As we developed the visual identity and executions, we fine-tuned the balance of equities -particularly in terms of how it came to life on packaging formats. This was to ensure we were maintaining findability for current drinks whilst creating a stronger bullseye on shelf with our red circle.

The biggest challenge was probably that, as we finalised the designs and started translating them across the many packaging formats, we couldn’t all get into a room together or a grocery store to look at print outs and mock-ups on shelf.

Whilst we all had love for the suggested visual ID from the start, there were of course some ‘safer’ routes explored just in case! We got into quals early on and in our pre-pandemic world, we were sat behind the glass watching consumers shop in a fake supermarket and keeping fingers crossed they’d pick up MGD.

We all stared in anticipation as shoppers slowly perused the beer aisle and couldn’t help but smile when a true MGD loyalist picked up our new pack straight away and called it out as his brand. Later when comparing the current and new he declared with conviction that ‘we should do this’ and that permission cleared the way for the new identity and packaging to launch.

To give Miller Genuine Draft a meaning and bring that to life in a way that can disrupt and create distinctive equities was central to this brand restaging. Apart from the core aspects of the newly defined brand narrative – discovering depth and character – a central message, learning and critical aspect of the journey we’ve been on is one of trust, learning and collaboration.

This might not matter to consumers, but it matters for clients and agencies – that when we trust each other, trust our guts and work as a team then we can collectively achieve an outcome that everyone is genuinely excited about. All the work for this brand relaunch was done in-house – from concepts to copy to illustration. It really was a passion project for everyone that had the opportunity to work on it – we all united behind this exciting vision for the brand and the opportunity to reimagine an icon.

It was about 14 months from briefing to file handover – before printing and actually getting into stores.

We’re hoping to drive a perception shift for MGD in the US. We want to stop beer consumers in their tracks, make them look twice and reconsider the brand. For people to feel excited to share a 12-pack of MGD at their next (socially distanced) gathering or bond with a friend over a can of MGD.