Behind the Idea: Switching Off with a Creature and a test card

As a successful UK-based mattress brand, Eve Sleep certainly cares a lot about our sleeping habits and it's probably among the most indicated brands that can actually teach us something about how we sleep.

To expose the dangers of bad sleeping habits (prolonged blue light exposure, among others), the brand has partnered with advertising agency Creature. The folks crafted a brilliant campaign centred around the concept of 'switching off' for the night – and what better tool to help with that than a Test Card F?

Today we are getting Behind the Idea that brought a brilliant OOH campaign to life, thanks to a lovely chat with Creature CCO Ben Middleton. 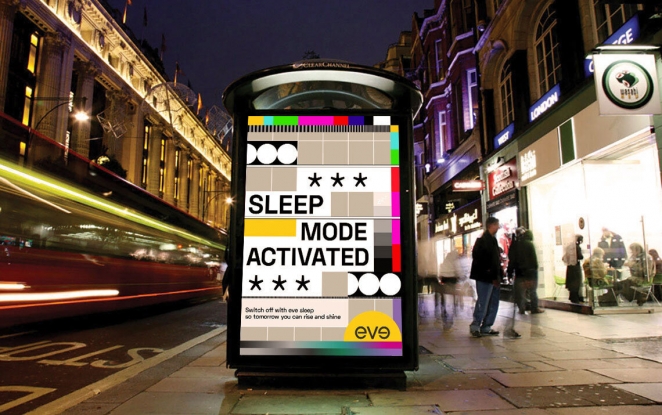 Staying true to their reputation as a sleep wellness brand, eve sleep asked us to develop a strategy that would authentically optimise viewers’ bedtime habits, whilst driving brand fame.

With such a brilliant brief from Eve the teams at Creature generated a huge number of ideas, which was massively exciting, but also meant a substantial amount of whittling was needed before we actually sat down with Cheryl and Caroline. That initial meeting where we presented our edit of creative ideas was invigorating in every sense. The energy that we felt with the client team was electrifying. The candour, the shared sense of ambition and that feeling that we had something really special in one of the routes was something that we were all looking for.

In short, we had a lot of ideas, that ranged from hugely ambitious to almost-impossibly ambitious (in the time frame that the Eve team had in mind). The idea that the Eve team wanted to pursue was one that sat at the right end of the spectrum and had the potential to really make some noise. That idea was to create a campaign to encourage the nation to #Switchoff from their devices in order to get a good night’s sleep.

The campaign was to be spearheaded by a subversion of the classic ‘Test Card F’ (the graphic card that used to come on the telly to signal that programming had come to end for the day). We decided to re-create it almost exactly (with the addition of some Eve branding and the Eve sloth) and use the little girl who featured in it to deliver unexpected messages and tips on how to get a good night’s sleep. These ranged from warning of the dangers of blue light, championing the value of sound in becoming restful through to extolling the importance of a comfy mattress. We then extended that aesthetic of the test card through the line into social video assets and even Digital OOH where we used the test card look and feel to make it appear that the posters had switched off themselves and either entered into ‘Sleep modes’ or were ‘powering down’.

As with anything good, the production process was extremely challenging. We had to make things quickly, we had to make them good and we had to make them within budget. Fortunately, at Creature we have an amazing production offering and the team sprang into action immediately. The biggest challenge we faced was casting a little girl who could deliver the tips and hints with that Eve Sleep sass. As luck would have it, we’d actually worked with Tallulah (the girl featured in the films) earlier in the year, so we quickly got her on-board. From that point on, we just had to wrestle with the broadcasters and media owners who really weren’t very happy about us making a series of ads that were encouraging the consumer to actively disengage with the channel/platform or poster. Needless to say there was a lot of re-writing/massaging and some more re-writing to get the exact dialogue or copy that the media owners would be able to run, but we got there in the end.

It’s not every day you get to work with puppets – and the eve sleep sloth is such a fun character to bring to life. Probably the best bit of feedback we had during production was “Give the sloth more lasers!”.

This campaign couldn’t come at a better time. A recent survey commissioned by eve sleep revealed that, for one in four Brits, quality of sleep is worse than ever - as they are kept up by worries and the change in their life and work routine, meaning that switching off before bed is getting harder and harder. This is only exacerbated by the ‘always-on’ stream of tempting content we now face across our multiple connected devices.

Wanting to help Eve sleep stay true to their reputation as a sleep wellness brand, and their mission to help the world Rise and Shine, we developed a campaign that would authentically optimise viewers’ bedtime habits, whilst driving brand fame. Reimagining Test Card F with obsessive attention to detail, and combined nostalgic elements with moments of surprise and invention has not only helped ensure the message to ‘Switch Off’ resonate across the country, but will helpfully help everyone wake up on the right side of bed.

We obviously believe there are numerous unique elements to this campaign. Ranging from buying and using advertising space to put out a message actively asking consumers to disengage with that channel (I don’t think anyone’s ever done that) to using and subverting Test Card F.

The team at eve sleep were on the lookout for ideas that could drive fame, so when we came up with the concept of reimagining Test Card F back in March, right before lockdown, we knew we had to take it to them. It all really ramped up once the strategy got signed off in August and we had to make it happen – so the production schedule for five 40” TV ads was shrunk down to one month.

We genuinely hope we sell a ton of mattresses. Eve sleep is an exciting and disruptive brand with big ambitions, it has been a joy helping them on their mission to help people rise and shine.