Behind the Idea: making a difference for Children in Need with Flow and BBC Creative

For kids and children in need, the year we just had was especially challenging in a number of ways. It's even worse when you think that most of these children don't really have control over their lives and get dragged down by bad feelings – like a raincloud looming over their heads and affecting their life, mood and social relationships.

We common people can still make a difference, and it was the work of BBC Creative and Flow to show us that much at the end of 2020. With stunning animation crafted for BBC Children in Need, the creative teams came together to tell a beautiful story with an incredibly captivating animation style, in partnership with children's author and illustrator Tom Percival.

Today we are getting Behind the Idea that brought Goodbye Rainclouds to life, with some fun facts about the pitching and brainstorming process and interesting insights from behind the making of this marvelous animated film.

The brief was to create a two-minute animated film that tells the story of three children facing some really tough challenges, who each get help from three charities that Children in Need support. The film had to be told in a way that would be emotionally engaging, without being overly sentimental, or portraying the children featured as victims. 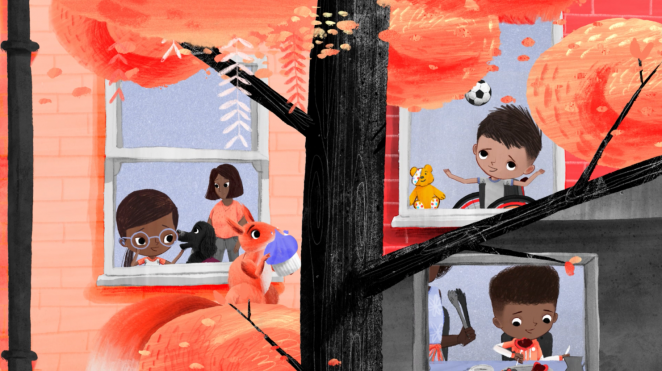 We were contacted by BBC Creative, the BBC’s in-house creative team, to see if we’d like to work with them as a production partner for this year's Children in Need TV commercial. Of course we jumped at the chance to work with them on such an iconic and important piece of work.

They had already partnered with celebrated children’s author and illustrator Tom Percival, who had written a draft story and created the designs for the main characters. As soon as we read the narrative and saw Tom’s beautiful illustrations we knew it was going to be something special. We were pitching against a couple of other animation studios, and didn’t know if we’d get the job, but we sent over some examples of our work and thankfully were chosen to produce the film. The narrative for the film had to show the challenges the children were facing, and how the support that they accessed from the charities had made a positive deference to their lives. We didn’t want to show the children as being victims, it was important that they had some spirit and were trying their best to deal with their challenges. Tom and the BBC Creative team came up with the concept of using rainclouds as a metaphor for their problems, showing the kids trying to get on with their lives but being thwarted by these rainclouds. The clouds had mischievous and even slightly menacing personalities and they made life difficult for the kids, as much as they tried to fight them off themselves, they only eventually disappear when the charities get involved and help them to live their lives. We do also show some of the real life issues the kids are facing, but the rainclouds help to show their emotions and visualise their frustrations with their situations. Using Tom’s narrative and voice-over script, we created a treatment and storyboard to visualise the action, which showed the context of the children’s lives, and their battles with the rainclouds trying to deal with their challenges. The children’s characters in the film are fictional but the charities and the key workers from those charities are based on real people and organisations, so it was very important that the situations we showed were authentic and accurate to the work they do.

With a project of this size and scope there are a number of stakeholders involved, and we did get through a few iterations of the storyboard to get to a stage where everyone was happy that the story was right and we were telling it well.

The look and feel for the film is based on Tom’s illustration style, and Tom created the main characters and lots of the artwork for the scenes, but there was so much to do he couldn’t do it alone. We worked with Tom to portion off scenes we could support with, and our in-house team ‘learned’ Tom’s style (with some Zoom training!) to create additional artwork. We then prepared the artwork for animation and brought it to life through motion. This year has been a tough one for everyone, but for some people who are already facing really difficult challenges it’s been doubly hard. We wanted to get that message across in the film, and show that even in a really hard year there is still hope, and by getting involved with Children in Need’s fundraising activities you can still help make a huge difference to kids lives. The BBC and Children in Need create a TV commercial every year in the run up to the big fundraising night in November, and this is the first year that it’s been fully animated. Partly due to the challenges of filming this year and partly out of a desire to do something different they went with an animated version. It was also the first year that the film was shown in a two-minute junction takeover across the BBC channels.

I think there’s sometimes an assumption that to create a film that tells a human story, and creates an emotional connection with an audience that it needs to be created using live-action footage of real people, but you only have to look at some of the classic John Lewis animated Christmas ads to see that this it’s isn’t the case. I personally think some of the best and most emotive films have been animated. It’s actually an amazing tool for creating compelling film, whether you’re looking to make something funny, sad or heart-warming, it’s a great way to provoke an emotional response from audience. 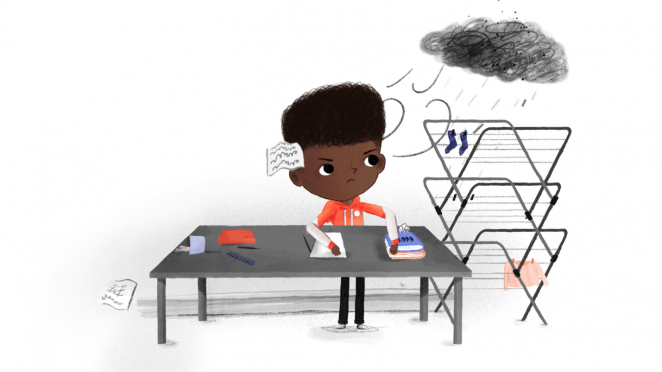 This was a huge project for the studio that kept the whole team busy for around two months, so once it wrapped we all needed some time away from the screens to decompress. For me that meant taking some time to spend with my kids, always a welcome distraction from work, and exercise – running, boxing, weight training. It really helps me physically and mentally to fit training around my work and family life. 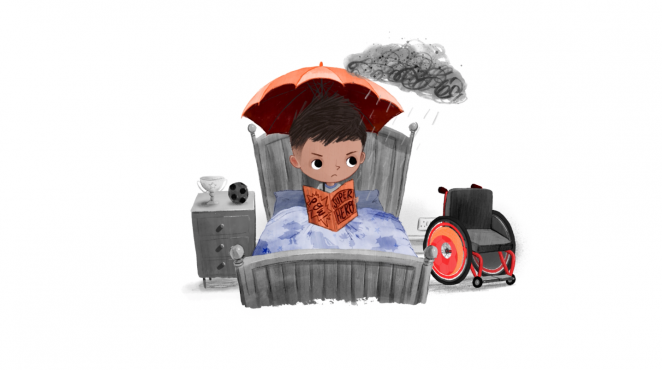 That classic Anthony Burril typographic poster always comes to mind when I’m asked this – Work Hard and Be Nice to People. Practice your craft, learn the skills, be as good as you can be but probably more important is being a good communicator and being nice to work with. You can be the best illustrator or animtor in the world but if you’re not a team player and can’t work well with others you won’t get far, animation and film especially are a team effort; it takes many people working well together to create beautiful films. 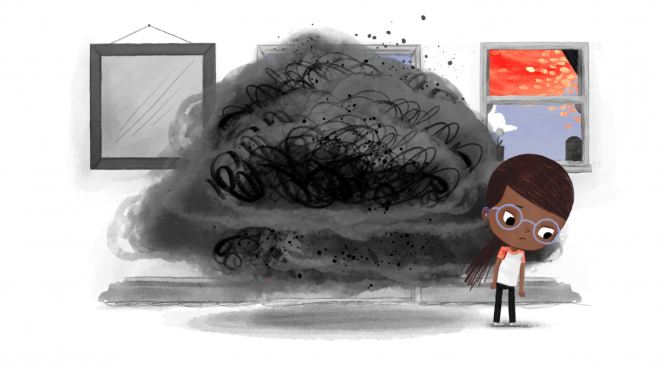 BBC Creative and Tom Percival had been developing initial ideas before our involvement, but the process for us to produce the main film, and several shorter cut-down versions, began in mid-August and ended late October.

The aim of the film is to highlight some of the amazing charities that Children in Need work with, and to encourage people to get involved with fundraising in any way they can. If the film helps to achieve these goals, and the fundraising goes well on the night, despite the really tough times many people are facing, I’ll be very happy.